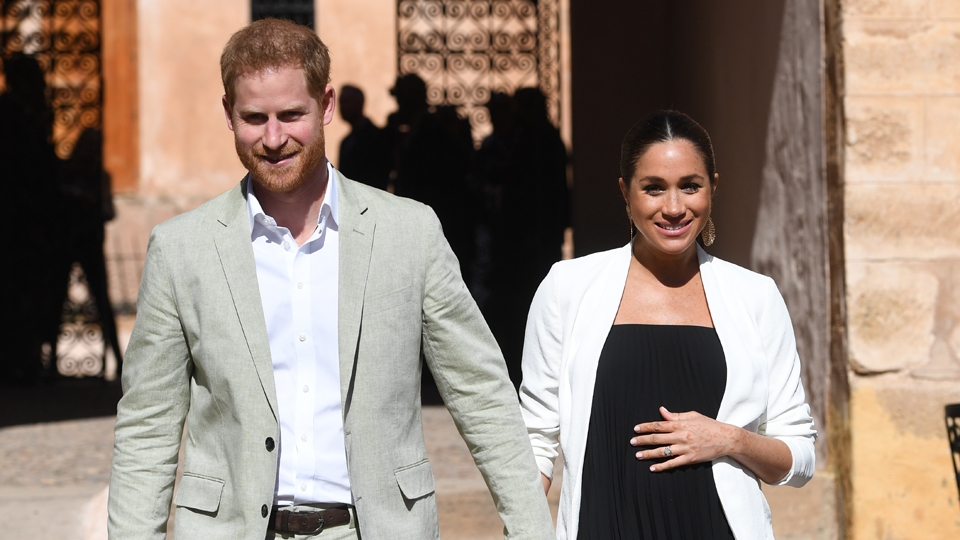 Home and away: Prince Harry and Meghan Markle in Morocco on February 25 during one of their trips. Photo: Getty

Prince Harry is having trouble making plans just now. With his first baby due literally any day, the army veteran prince wasn’t sure he’d make it to an Anzac Day service in London.

But on the day, with Prince William in New Zealand, Harry was a surprise escort for sister-in-law Kate (in a Catherine Walker bespoke teal coat dress) at Westminster Abbey.

Despite the occasion’s sombre tone, Harry, 34, and Kate, 37, chatted and laughed as they strode in together, although precautions which were taken meant the Duke of Sussex missed out on recognition in the official program.

“With their baby due, his name was not printed in the program in case,” a royals source told People.

Being overlooked on Anzac Day is a minor blip compared to a bigger scheduling decision the any-day-now baby has created for the Duke and Duchess of Sussex.

Just before Christmas last year, Harry and wife Meghan Markle, 37, had a long wish list: to move house from London, separate their personal brand from the Cambridges, and tour the US and Canada in 2019.

The first two have been ticked off: Meghan and Harry are preparing to bring their first baby home to Frogmore Cottage at Windsor, and their other baby, their almost-month old Instagram account Sussex Royal,  already has 5.2 million followers.

But their plans to take their firstborn to the Californian-born duchess’ birthplace and adopted home – she lived in Toronto for seven years filming Suits – have reportedly been shelved for now.

While the duchess reportedly wants just three months’ maternity leave after the birth, “Meghan and Harry seem to be re-prioritizing their travel plans,” according to Vanity Fair’s royals reporter (and Harry biographer) Katie Nicholl.

A source who works with the travel-happy Sussexes – during their courtship, they whizzed to the Caribbean, Africa and Norway, and visited Australia last October on their first royal tour – said that they are “unlikely” to crack out their passports this year.

Or at least, Meghan won’t be.

“As it stands, the Duchess of Sussex won’t be going away on an official overseas tour this year,” the source told Vanity Fair.

“Things might change. Right now we have been told that there won’t be any overseas travel before the end of the year because Baby Sussex will be too young.”

Harry and Meghan are still “really keen” to cross the Atlantic, said the source, but as first-time parents are “anxious” about committing at this stage to an official tour with a young baby.

Bringing the kids along has become a royal thing since Prince Charles and Princess Diana brought nine-month-old Prince William to Australia in March 1983.

William, 36, and Kate brought their own baby Prince George on their Australian tour in April 2014. The pair also took George and Princess Charlotte on a royal tour of Canada in September 2016.

As for Harry and Meghan’s reported plans to move overseas, possibly to Africa, for work, “broadly it will be a series of short trips away rather than spending years away from home,” a source told Vanity Fair.

The couple wants an “international” profile, according to a close friend.

“Before they were engaged, they talked about being roving royals—the ones who were going to travel around the world, be international, affect change.”

She “has always wanted to be a humanitarian who travels around the world,” a charity sphere source said.

“She’s got her pick of where to go now. She didn’t have that platform as much when she was a celebrity.”

Meghan will be back on the philanthropy trail “as soon as possible”, a source told The Sun on April 26, claiming the duchess will likely be back in the public eye for June’s Trooping the Colour.

“She has huge amounts of energy, is extremely determined and wants to be as hands-on as possible with her charities.”

Harry will be firmly where he wants to be too, Nicholl told The New Daily last year.

“He’s a great people’s person. He has the ability to put anyone at ease and is especially good with children and young people, just like Diana was.

“Over the past couple of years the Queen has entrusted him with greater responsibilities … and he has proved to be an accomplished statesman.”

Melania Trump: Bombshell revelations about what she did during US Capitol riot
Retailer pauses facial recognition tech trial after privacy complaint
Donald Trump grabbed at steering wheel in bid to get to Capitol riot
Two charged over US migrant truck deaths
Governor-General admits ‘mistake’ over Insta ad endorsement
Nick Kyrgios spits at ‘disrespectful’ fan at Wimbledon
Seeing red over Pink and her decision to stop sharing her children on Instagram
Today's Stories