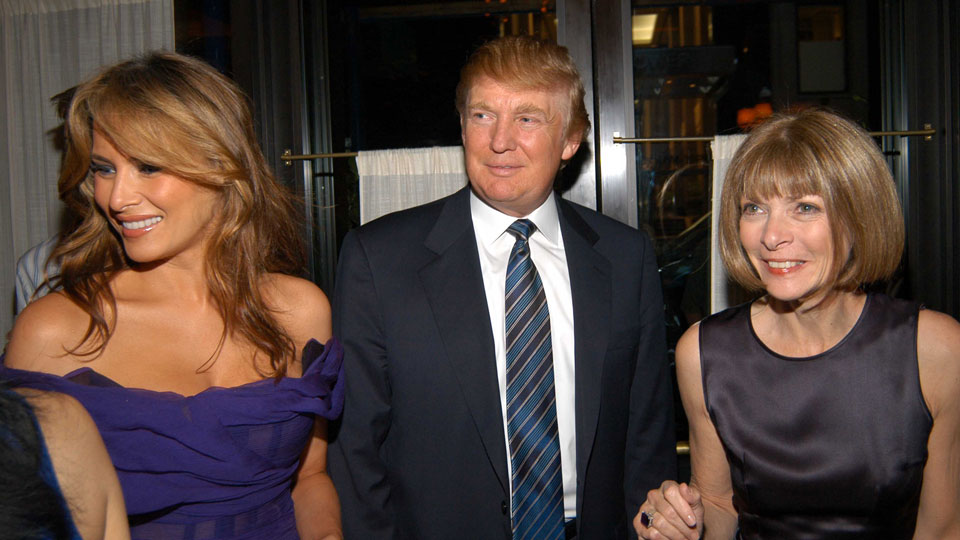 Melania Trump and Anna Wintour are engaged in a bizarre war of words after the US Vogue editor-in-chief seemed to suggest the former model would never appear on her magazine’s cover again.

Being on “the cover of Vogue doesn’t define Mrs Trump, she’s been there, done that long before she was First Lady”, Ms Grisham said in a statement to USA Today on Tuesday (US time.)

“Her role as First Lady of the United States and all that she does is much more important than some superficial photo shoot and cover.

“This just further demonstrates how biased the fashion magazine industry is, and shows how insecure and small-minded Anna Wintour really is.”

The comments came after Wintour was asked on April 8 by CNN’s Christiane Amanpour how Vogue chooses women to profile and why it put then-first ladies Hillary Clinton and Michelle Obama on the cover.

Wintour admitted that, under her command, Vogue is “taking a stand” for Democratic politics and politicians.

“I believe … you have to stand up for what you believe in and you have to take a point of view,” she said.

“You have to stand up for what you believe in,” Anna Wintour tells me of her very public stances on political issues. “And you have to take a point of view.”

“I don’t think you can try and please everybody all the time.” pic.twitter.com/wqWQOm4DZY

She didn’t mention Mrs Trump by name during the interview but the comments were interpreted as a de facto ban on Melania.

In March 2018, New Zealand Prime Minister Jacinda Ardern did a shoot and interview touching on her meteoric political rise and motherhood for US Vogue.

New Zealand’s prime minister, @jacindaardern, is young, dynamic, forward-looking, and unabashedly liberal—call her the anti-Trump. Tap the link in our bio for more. Photographed by @derekhendersonphoto, styled by Kathryn Neale, Vogue, March 2018.

Mrs Obama, Mrs Clinton and Ms Ardern “are women that we feel are icons and inspiring to women from a global perspective”, Wintour said.

Mrs Trump appeared for the first and last time on the February 2005 Vogue cover in her Dior wedding dress after marrying Donald Trump.

In 2017, Wintour said she expected Mrs Trump would get a Vogue cover as new first lady. So far that hasn’t happened.

Ms Grisham said the First Lady would continue to Be Best: “Unfortunately Mrs Trump is used to this kind of divisive behaviour.”

It’s the second time this week the communications director has sprung to Mrs Trump’s defence.

A UK Daily Mail story about Mrs Trump and Karen Pence’s visit to military base Fort Bragg on Monday was harpooned by Ms Grisham because it focused on FLOTUS’s windblown hair.

“This display of liberal media bias undermines all who serve,” Ms Grisham responded on Twitter.

.@flotus & ⁦@SecondLady⁩ traveled to @ftbraggNC today to honor #MonthoftheMilitaryChild & those who put their lives on the line to keep us safe. This is what @DailyMail chose to cover. This display of liberal media bias undermines all who serve. https://t.co/eYZsZ8atoD

Commenters pointed out the media outlet is notoriously conservative.

During the North Carolina visit, Mrs Trump – in khaki and a designer flak jacket – was her usual well-groomed self on her own social media feed.

Great visit yesterday to @FtBraggNC with Second Lady Karen Pence and @secretary_of_the_army Dr. Mark T. Esper. The United States Military is a national treasure and I am so grateful to all the hard working men, women and families who serve our great nation. Thank you!

Meanwhile, Mrs Trump isn’t the only First Family member being frozen out by Wintour.

During a panel discussion helmed by journalist Tina Brown in New York on April 12, Wintour was asked if there is anything Mr Trump could do to snare an invitation to May 6’s Met Gala.

“Absolutely nothing,” she said to applause from the audience at the Lincoln Centre.