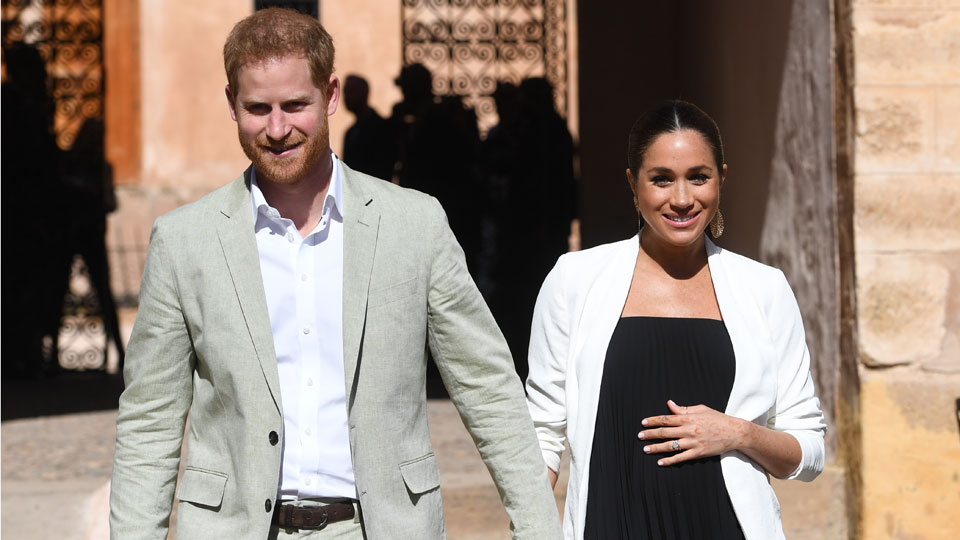 Expectant parents the Duke and Duchess in Rabat, Morocco, on February 25. Photo: Getty

Meghan Markle and Prince Harry are keeping their baby plans private, but that doesn’t mean the British public isn’t fully engaged with the imminent infant.

Hot on the heels of her new Instagram account , Sussex Royal, breaking the record as the fastest to acquire one million followers – five hours and 45 minutes – their unborn baby is also smashing benchmarks.

As reported by business journal Forbes.com, the any-day-now arrival of Baby Sussex has given birth to more action at the bookmakers than any previous royal baby.

“It’s fair to conclude that ‘Brand Sussex’, as the ultra-popular Duke and Duchess of Sussex have become known, is out of control,” Forbes said.

Punters have already laid out bets worth more than $14.2 million on the sex, name, title and birthday of the baby, due this month.

That’s more than three times the amount wagered before the births of Prince George, 5, Princess Charlotte, 3, and Prince Louis, who turns one on April 23, according to website Bookmakers.

If the baby is a girl, Diana is a hot favourite with some bookies, including Sportsbet and UK giant William Hill. Grace, Victoria and Alice are also well backed, with agency Coral installing Elizabeth as 6-1 top choice.

Should the baby be a boy, William Hill has Arthur top of its list, followed by Edward and James. Coral has Albert as favourite.

As to the sex of the baby, William Hill has the odds at 8-11 for a girl and evens for a boy.

The baby will not be an automatic HRH, and it seems the Queen may have decided – taking Harry and Meghan’s own wishes into account – not to grant the baby the title of prince or princess.

Seven months before George’s birth, the Queen confirmed the Cambridge children’s HRH status in a Letters Patent. No such declaration has yet been made about Baby Sussex.

“The main decision will be with Harry and Meghan obviously, as to whether they would wish this,” royals commentator Richard Fitzwilliams told Newsweek.

If it doesn’t have a royal title, the baby will still inherit a family one. A son will most likely be Earl of Dumbarton, Harry’s lesser Scottish title. A daughter would be Lady (first name) Mountbatten-Windsor.

Now in the final days of her pregnancy, Meghan has been cloistered away from public view. But that doesn’t mean she’s just putting up her feet and tucking whale music playlists into her hospital bag.

Since her last public outing on March 19, the busy duchess, 37, has moved house to Frogmore Cottage at Windsor, welcomed her first house guest (her wedding make-up artist Daniel Martin) and reportedly took a ‘babymoon’ with Prince Harry, 34.

The Sussexes spent three nights in the $18,000-a-night Long Room at five-star hotel Heckfield Place, a 45-minute drive from their new home, according to People.

While the details are not being released, various reports claim smart money is on Meghan opting for a home birth – with a room at Frogmore Cottage set up like a delivery suite – as the Queen did with her four children.

When the time comes, it is expected the palace will confirm in a short written statement that the duchess is in labour, followed by a second announcement giving details of the baby’s sex, weight and time of birth.

But the palace will not yet confirm whether news of the arrival will be posted on an easel outside Buckingham Palace, or whether it would be celebrated with a gun salute, according to The Telegraph.

The Royal Collection Trust would not say whether a commemorative range of china will be produced.

The Sussexes’ desire for no fanfare sparked criticism the couple court publicity when it suits them but shun it when it matters to the public.

“The duke and duchess have chosen to do things in their own way for their own reasons,” said Joe Little, managing editor of Majesty magazine.

While Mr Little acknowledged “think there may be an element of disappointment” for zealous fans, “this is how the Sussexes have chosen to do it”, he told The Telegraph.