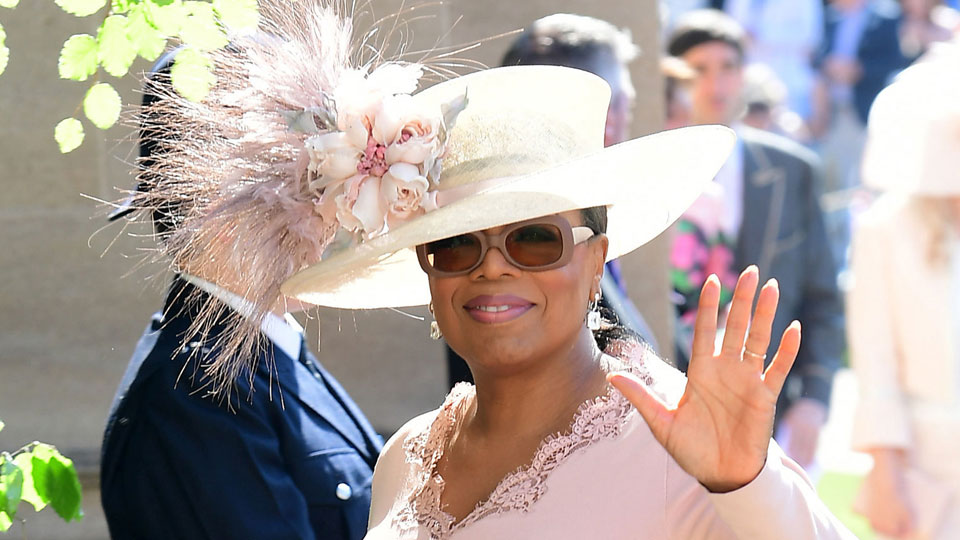 Oprah WInfrey at the wedding of Prince Harry and Meghan Markle at WIndsor on May 19, 2018. Photo: Getty

Winfrey, 65, has revealed she and Harry, 34, had “secret meetings in London” with a TV crew to pull together the documentary series, which will screen on the Apple TV platform in 2020.

The high-profile pair’s passion project –Oprah and Harry are co-creators and producers – is about mental health.

It will share stories “of unparalleled human spirit fighting back from the darkest places,” the prince said.

A guest at Harry and Meghan’s Windsor wedding last May, Winfrey said she teamed up with the prince after a conversation during which she asked him what the most important issues facing the world are.

“He said there were two,” she said on CBS This Morning on Wednesday (US time.)

Harry’s opinion saw Winfrey reveal she was working on the series for Apple: “He said at the end of the conversation, ‘If there is anything I can do to help … ‘”

We are excited to announce that The Duke of Sussex and Oprah Winfrey are partners, co-creators and executive producers on their forthcoming mental health series launching on Apple in 2020. The pair have been developing the series for several months and are looking forward to sharing such an important project on this global platform. The dynamic multi-part documentary series will focus on both mental illness and mental wellness, inspiring viewers to have an honest conversation about the challenges each of us faces, and how to equip ourselves with the tools to not simply survive, but to thrive. This commitment builds on The Duke of Sussex’s long-standing work on issues and initiatives regarding mental health, where he has candidly shared personal experience and advocated for those who silently suffer, empowering them to get the help and support they deserve. His Royal Highness has spent many years working with communities throughout the UK and young people across the Commonwealth to break the stigma surrounding mental illness and broaden the conversation of mental wellness to accelerate change for a more compassionate, connected and positive society. Quote from HRH: “I truly believe that good mental health – mental fitness – is the key to powerful leadership, productive communities and a purpose-driven self. It is a huge responsibility to get this right as we bring you the facts, the science and the awareness of a subject that is so relevant during these times. Our hope is that this series will be positive, enlightening and inclusive – sharing global stories of unparalleled human spirit fighting back from the darkest places, and the opportunity for us to understand ourselves and those around us better. I am incredibly proud to be working alongside Oprah on this vital series.”

The TV show will build on Harry’s longstanding commitment to raising awareness of mental health issues.

He and brother Prince William, 36, and his wife Kate Middleton, 37, launched the Heads Together mental health campaign in 2017.

The same year Harry spoke candidly about his struggles to cope with the 1997 death of his mother, Princess Diana.

William and other royals urged him to start therapy to address repressed emotions about Diana’s death, and he did in 2014.

“I can safely say that losing my mum at the age of 12 and therefore shutting down all of my emotions for the last 20 years has had a quite serious effect on not only my personal life but also my work as well,” he said.

“Our hope is that it will have an impact on reducing the stigma and allowing people to know that they are not alone, allowing people to speak up about it and being able to identify it for themselves and in their friends,” she said.

Speaking of friendship, Winfrey also talked about Meghan, calling the treatment the duchess has received from media unfair.

“If people really knew her they would know that she is not only everything that we perceive of her as being graceful and dynamic in holding that position, but she just has a wonderful, warm, giving, loving heart,” Winfrey said.

With his countdown to first-time fatherhood on in earnest, Harry posted on the new Sussex Royal Instagram account he shares with Meghan that he is “incredibly proud” to be working with Oprah on the “vital” series.

“I truly believe that good mental health – mental fitness – is the key to powerful leadership, productive communities and a purpose-driven self,” he said.