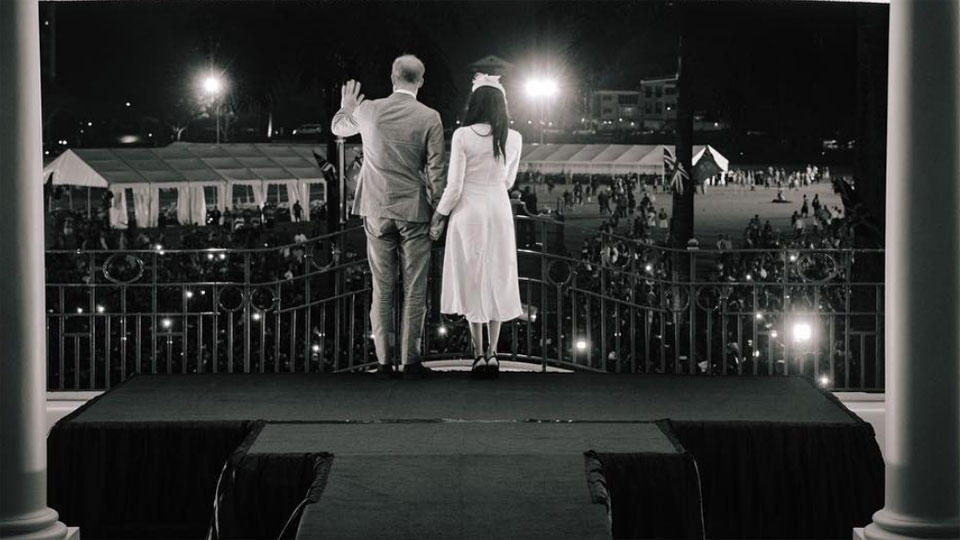 In one photo on her new Instagram account, Meghan Markle crouches down elegantly at Queensland’s Fraser Island, a split in her Reformation sundress giving a decent flash of yoga-toned royal thigh.

In another – the picture of glamorous couple goals – the former actor and husband Prince Harry are seen from the back, holding hands like rock stars in front of an audience, their teamwork and love on display.

The carefully-edited images are among nine chosen for the April 2 launch of Harry and Meghan’s revamped social media identity, called Sussex Royal.

Born after Harry and Meghan split their household from that of Prince William and Kate Middleton to forge their own brand, the account still has a way to go to catch the Cambridges’ 7.2 million followers.

But for Harry and Meghan, the exercise is about much more than likes.

“It’s about remaining relevant,” Dr Brent Coker, author of Going Viral and consumer psychologist at the University of Melbourne, tells The New Daily.

“They’re very sophisticated about how their public life is orchestrated. My guess is they want to appeal to the millennials, hence the decision only to have an Instagram account.

“In terms of targeted appeal they’re not spreading their resources thin.”

Given their commitment to causes, “values-driven” Harry and Meghan are likely to use their account to sell on-brand messages, Sydney social media educator Laurel Papworth tells The New Daily.

“They’re both values-driven. I think we’re going to see a lot more about what their passion projects are. Other people post fitness ‘inspo’, but I think they’ll have social good inspo.”

In their first message to followers, Harry and Meghan said they “look forward to sharing the work that drives us”. Even so, their messaging and branding will start off “soft”, Ms Papworth predicts.

“It might be what we call ‘jab, jab, jab, right hook.’ So, here’s a cute photo of the baby and Meghan in a beautiful dress, then the right hook,  where they move into a more values-driven space.

“If I was guiding them I’d be finding ways to lead everyday people by being the change.”

The couple’s overall goal is key, says Dr Coker: “The term I use is affinity, when you relate to something on a deeper level.”

“The danger the royals face is they’re not seen as not normal. When you’re too far removed from the public it becomes difficult to be an influencer.

“So what they want is not to look as if they’re in the golden castle on the the hill and never coming down. That’s the ultimate aim.”

One major driver of Instagram followers is location-based imagery, says Dr Coker, who notes Harry and Meghan hit that base from their first post with feel-good global photos.

“Wealthy kids find it easier to get followers because they take photos of themselves in fabulous places: Mansions, skiing, the Bahamas holding a cocktail.

“The average person wants insight into these people’s lives, which look perfect from the imagery,” he says.

“That all plays nicely into the royal family and exactly what they want from social media. It’s giving controlled insight into what they’re all about, and that’s being role models.”

“Welcome to our official Instagram; we look forward to sharing the work that drives us, the causes we support, important announcements, and the opportunity to shine a light on key issues. We thank you for your support, and welcome you to @sussexroyal.”- Harry & Meghan

The account will give Meghan and Harry a “direct market channel where they can fix problems” using “a deflection rather than a direct rebuttal”, Ms Papworth says.

“If magazine stories say, ‘Meghan is pregnant again and Harry is disappointed’ they can deflect by showing her super skinny in a summer dress. You don’t say it but you show it.”

As for giving love back, so far Sussex Royal is being picky. Harry and Meghan is following just 23 Instagram accounts, including Princess Eugenie, the National Theatre and England Rugby.