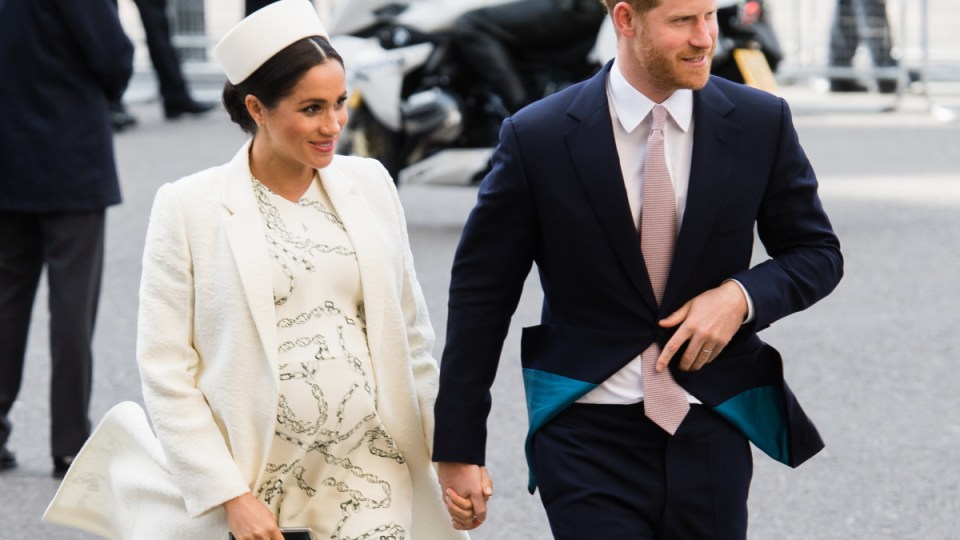 Meghan and Prince Harry at this week's Commonwealth Day service, her last public engagement before the birth of her baby. Photo: Getty

Britain’s Prince Harry and his pregnant wife Meghan are to set up their own household, officially splitting the joint operation they have shared with Harry’s older brother William and his wife Kate.

Harry and Meghan, the Duke and Duchess of Sussex, have shared staff with William and Kate since their marriage in May last year.

Word of the impending split between the two couples broke late in 2018 and the Queen has now made it official.

On Friday (Australian time), it was announced she had agreed to allow Harry and Meghan to set up a new court at Buckingham Palace this British spring.

“The Duke of Sussex currently has his own private office, which has been supporting the Duchess since the engagement of Their Royal Highnesses in November 2017,” the palace said in a statement.

“This long-planned move will ensure that permanent support arrangements for the Duke and Duchess’s work are in place as they start their family and move to their official residence at Frogmore Cottage.”

There have been reports in recent months of a rift between the Sussexes and the Cambridges, although there has been no public indication of any feud.

“They have brought many charities working in the same sector together to empower them and lend their positions,” royals author Sally Bedell Smith said.

“But they will increasingly follow their own respective interests.”

Earlier this week, the Cambridges and Sussexes seemed on good terms when they appeared together at a Commonwealth Day service in London.

That was the last public engagement for former US actress Meghan ahead of her maternity leave. She is due to give birth to her first child with the Queen’s grandson within weeks.

Kensington Palace said this week that Meghan would suspend official royal duties until she gives birth. She does have some private meetings scheduled.

A due date for baby Sussex has never been announced. However, Meghan told crowds in Birkenhead in January that she was due in “April or May”.

The Sussexes are also in the process of moving from a cottage in the grounds of Kensington Palace, where William and Kate live, to a new home on the royal family’s Windsor Estate.

Frogmore Cottage, part of a royal family residence since the 18th century, is where they held the evening reception after their dazzling wedding ceremony at Windsor Castle.

Harry and Meghan have appointed Sara Latham, a public relations heavyweight and former senior adviser on Hillary Clinton’s 2016 US presidential campaign, as their head of communications.

She also worked in the White House under Bill Clinton in the late 1990s when he was American president and was a special adviser to the late Dame Tessa Jowell when she was culture secretary.

Harry, Meghan split from royal household ahead of baby’s birth