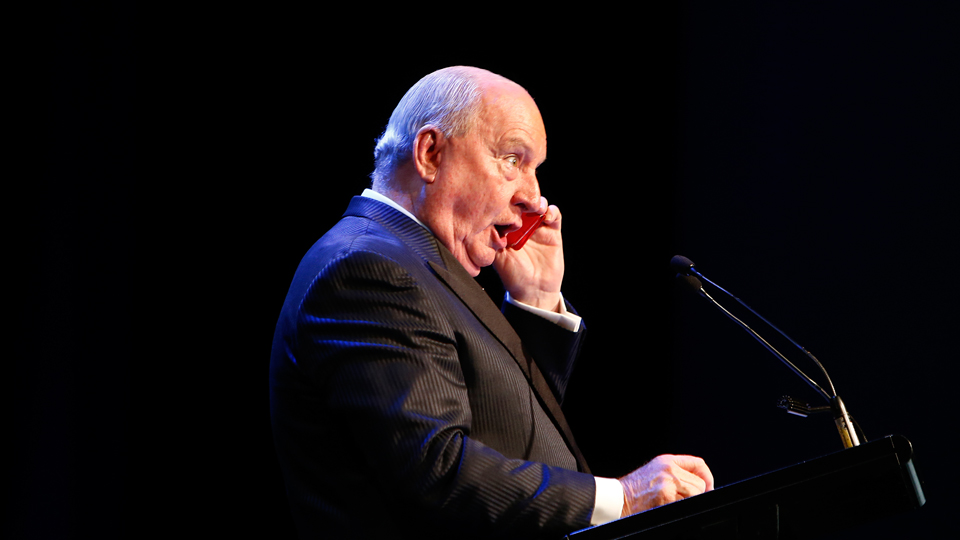 In a fiery on-air exchange, NSW Opposition Leader Michael Daley has told radio broadcaster Alan Jones he will sack him and the rest of the SCG Trust board if Labor wins the March 23 state election.

“If I’m elected the board will go,” Mr Daley said.

The 2GB interview on Tuesday spiralled quickly into a combative conversation about Mr Daley’s plans to withdraw funding for the rebuilding of the controversial Sydney Football Stadium.

The Coalition’s $730 million plan to knock down the stadium – commercially known as Allianz Stadium – and build a new one is a “scandalous waste of money”, Mr Daley said.

According to the trust, the 31-year-old stadium is not up to standard and is unsafe.

During the interview, Mr Daley, 53, said the trust wasn’t telling the truth about the stadium’s safety, particularly in regard to concerns about “flammable” seats.

He said SCG Trust chairman Tony Sheppard “swore on oath the seats were flammable and the next minute we see [Sport Minister] Stuart Ayers, a friend of yours, and others bragging on TV about how they are shopping those seats to rugby clubs all over Australia.

That’s one of the reasons I’m going to sack the board. I know you’ve been on that board for 30 years.”

Mr Jones replied, “Yeah, we do the job for nothing, don’t worry, we don’t mind.”

‘Thanks for your service’: Michael Daley threatens to sack Alan Jones if elected

The SCG Trust is a state government agency that manages the major Moore Park sporting precinct, including the Sydney Football Stadium and Sydney Cricket Ground.

Last week, the stadium reconstruction was halted with an injunction that prevented developer Lendlease from carrying out “hard demolition” works.

A ruling on the stadium’s future is expected later this month.

Mr Daley has insisted that if Labor is elected, it will cancel the stadium’s rebuild and pursue priorities in health and education instead.

Mr Daley couldn’t resist a final dig at Jones as the interview wrapped up: “Sorry about the SCG Trust. Thanks for your service”.

The verbal stoush is the latest controversy Jones has been involved in in the past seven months.

There was uproar in August over his on-air use of the racist phrase “n—r in the woodpile” in relation to the Liberal leadership chaos that led to the departure of Malcolm Turnbull.

In September, he and his radio team were ordered to pay a record $3.7 million in compensation for defaming Queensland’s prominent Wagner family by claiming they were responsible for 12 deaths in the 2011 Lockyer Valley floods.

A month later, he issued a rare apology, saying he regretted his on-air treatment of Sydney Opera House chief executive Louise Herron over plans to project the barrier draw for The Everest horse race on the Opera House sails.

In November, Jones’ employer Macquarie Media confirmed it was holding off on talks with him amid reports it was looking to cut him loose when his contract, worth a reported $4.5 million a year, expires at the end of June 2019.

After his heated exchange with Jones, Mr Daley issued a statement qualifying that he would sack only the unelected members of the board.

Phil Waugh and David Gilbert, who were elected by members, will stay. Former Test cricketer Stuart MacGill will also be spared.

Alan Jones and SCG board threatened with the sack