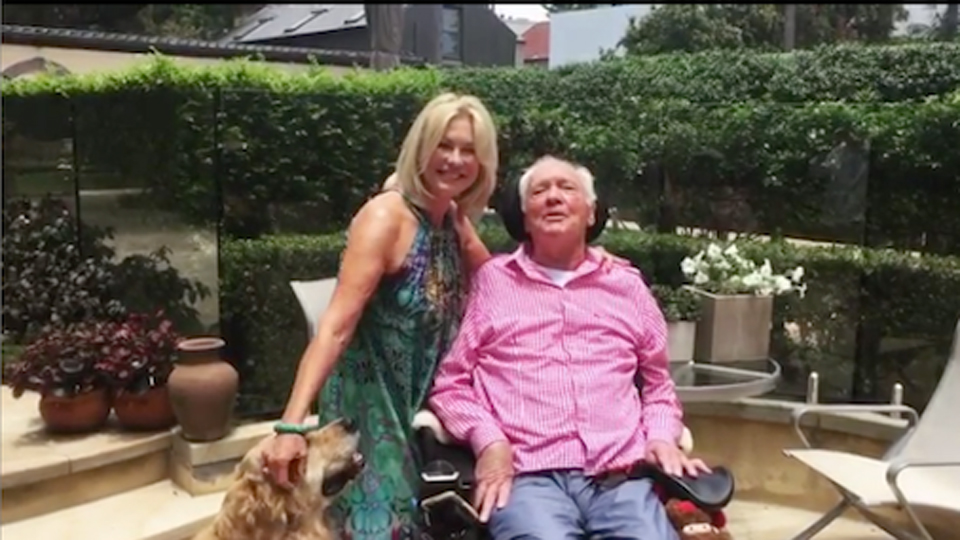 TV presenter Kerri-Anne Kennerley has paid tribute to her “beautiful husband” John Kennerley after his death at age 78 in a Sydney hospital.

“John, you were the love of my life,” the Studio 10 regular wrote in a touching Instagram post celebrating his life and challenges.

The post featured a photo of her and John on their 1984 wedding day. It was the first wedding to be held at the Sydney Opera House.

During John’s last days and moments, his wife and son Simon were by his side.

“It’s with a heavy heart and awful sadness that I let you know that my beautiful husband John passed away last night,” Kennerley wrote.

“As you all know, John has faced some tremendous challenges over the past few years and with each he has been extraordinarily brave and determined to overcome those hurdles and live a normal life.”

It's with a heavy heart and awful sadness that I let you know that my beautiful husband John passed away last night. As you all know, John has faced some tremendous challenges over the past few years and with each he has been extraordinarily brave and determined to overcome those hurdles and live a normal life. I want to thank everyone at St Vincent's Hospital for the beautiful care they have provided to John in his last days. John passed away peacefully with his son Simon and I by his side. John, you were the love of my life. Xxx

Business man Kennerley was left an incomplete quadriplegic after a freak fall from a wall at a golf resort near Coffs Harbour in March 2016.

“It’s daunting because everything is new,” she told Starts at 60 in July  2016 about first being told her husband would be wheelchair-bound and almost completely paralysed.

“You don’t know the potential problems, issues, how to do things, but after a while with experience you get into a swing and it’s the new norm.”

What a year. Wishing you all a very safe & Happy New Year. 🍾🎉We are very grateful for the support all you have given to us this year and has not gone unnoticed. Much love to all 💕 #2017

After the accident, British-born John retained some use of his hands and could speak, and Kennerley said they found ways to cope and rebuild their world.

“What idiot, what fool, would even dare to say ‘oh, my husband’s a quadriplegic, this is all good, isn’t this wonderful’. What rubbish.

“It is daunting, it is awful, but it is what it is. But once you take that deep breath, you accept that is it the new norm.

“I couldn’t believe that anyone could be so stupid as to try and pretend that having a catastrophic accident, or having a partner who has an issue, is anything but difficult. But it’s what you eventually adjust to.”

We have had a wonderful 32 years together. Can't wait until he comes home at the end of the year 💖

The longtime couple met in New York when Kerri-Anne was in a first marriage that was abusive, she told the Australian Women’s Weekly in December 2017.

“He was very tall, six foot one, not particularly attractive, but full of swagger … I was drawn to him from first sight,” said Kennerley.

After a terrifying domestic violence incident with her first husband, Kerri-Anne fled to John’s apartment.

“She arrived at my doorstep with the black eye and a bloody nose, and she never really went home,” John said.

When he scored a job in Sydney, Kerri-Anne came home with him: “When you realise that you’d really rather be with someone that you love, you follow your heart. Simple as that.”

Kennerley’s Studio 10 colleagues were emotional on Thursday on air.

“As someone who has been through this, losing my husband Pete just over a year ago, what Kerri-Anne is going through is the worst time of her life,” said Angela Bishop.

Added host Sarah Harris, “Kerri-Anne is part of our dysfunctional [Studio 10] family. It’s all for one and one for all, we love you KAK. We’re sending you so much love.”

Network 10’s CEO Paul Anderson offered his condolences to Kennerley and Simon on the loss of their husband and father.

“John faced some enormous challenges over the last few years and during this time, Kerri-Anne, in her usual grace and stamina, has shown enormous strength, compassion, love and commitment,” Mr Anderson said.

Kerri-Anne Kennerley's husband John has sadly passed away. Our thoughts, love & prayers are with our co-host & her family during this time. pic.twitter.com/xlxriSdj4t