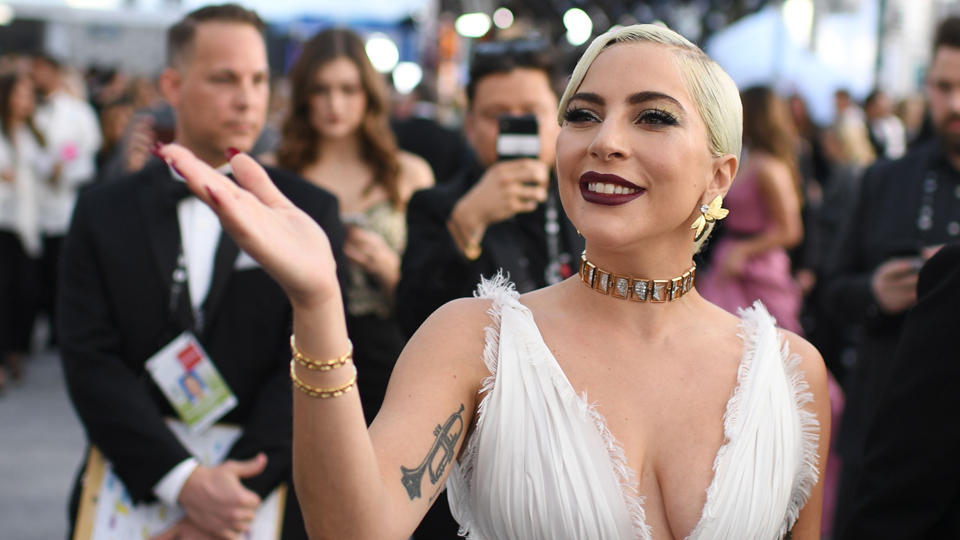 Lady Gaga arrived on the silver carpet in more restrained fashion than of late. And nailed it. Photo: Getty

With just the Oscars left to tick off in Hollywood’s awards season, stars threw everything at their looks for the Screen Actors Guild Awards at the Shrine Auditorium in Los Angeles.

That approach didn’t work for everyone. The SAGs silver carpet (held on Monday AEST) produced a mish-mash of styles, from pretty fabulous to unforgivably dull to offbeat.

Sequins, plunging necks, shades of pink and $5-a-metre lace were all a thing, with an unfortunate smattering of Year 11 formal shoes and some matronly updos.

Margot Robbie, who skipped the Golden Globe and Critics’ Choice awards, was a loser in her category but smashed it in the fashion stakes in head-to-toe Chanel that called to mind a toned-down Cleopatra.

Singer Kate Nash looked like someone gave her carte blanche in a kid’s craft box and she muttered ‘be zany, be zany’ as she cut loose with a hot glue gun and beads. She also looks unfeasibly happy with her bag.

After putting people to sleep with her Critics’ Choice safe navy dress, Amy Adams woke us back up with a sophisticated, fun, structured gown that was a perfect foil to the sea of frou frou pastels.

In a red satin gown (great colour on her), Rumer Willis brought the drama. But maybe too much of it. The dress needed running in and the overall effect was a touch Joan Crawford.

Serial train lover Lady Gaga pulled things back for the SAGs, and it worked. Her Dior dress meshed classic cinched waist and full skirt with contemporary fraying and a choker that didn’t look tacky. How is that possible? Burgundy lips and nails were just right.

Was Sophia Bush angling for the lead in a Princess Mary biopic? Diabolical lady hair, bad Morticia Addams cape and fabric that makes you itch looking at it. Podium finish for most unnatural look of the night.

Bohemian Rhapsody’s Lucy Boynton was both ethereal and gothic, the clever girl, in a floral jacquard dress with spotted tulle overlay. Love it or hate it, it was one of the biggest high fashion statements of the night.

Catherine Zeta-Jones increasingly looks like she’s auditioning for Dancing with the Stars. Those sandals are the pits.

Lupita Nyong’o abandoned her signature princess look and went totally modern and fabulous. Everyone hates a see-through skirt but this one was next level, with the sexy tuxedo bodice. Bravo.

Glow’s Britt Baron looked like her mum did a sewing course at the local strip mall and offered to make her something nice.

Betty Gilpin’s tiered silver column dress was so unreal it didn’t matter that she teamed it with an expression that said, “I am a bad-tempered robot and I’m not even sure where I am”.

Crazy Rich Asians’ Fiona Xie was escorted off the silver carpet and into a nearby creche. Hey kids, the fairy entertainer is here.

Ellen Wong (Glow) was slinky in an ombre sequinned gown.

Emily Blunt’s Michael Kors owed everything to its oversized ruffle detail and her innate queenliness. The frills created a social media stir courtesy of people with nothing better to do than see lady parts everywhere.

Alison Brie got the memo that bows are big this year. Except she maybe interpreted it too literally.

The pantsuit fad is done, but Emma Stone still wore the trousers. Her Louis Vuitton one-shouldered embellished shirt with severe pant was party on the top, business on the bottom. Super chic.

Sandra Oh, this Jenny Packham made me want to fix your weird hair and dress you in something less fussy and more kick-ass. Call me.

Gemma Chan must have been thrilled when she did her last last-minute mirror check. Beautiful. Don’t ever take it off.

The Handmaid’s Tale Madeline Brewer surely lost a bet with someone who made her wear a cheap nightie from an adult store. Hideous – those sleeves and that frill. Great make-up though.

Elisabeth Moss has never met a strapless dress she didn’t immediately want to wear to an awards night. This is one of her best, but she’s teetering on needing to break out from the ingenue look.

Barry’s Kirby Howell-Baptiste wore a dress designed for a guaranteed Oscar winner and a pussycat bow in her hair. Too much.

Not so Glow star Shakira Barrera, who made a statement in a ‘Free Nicaragua’ ensemble that was, oddly enough, the only political statement on the night.

Mandy Moore was quietly elegant and loudly dull in an embellished sheath dress with side split that nobody has ever worn before.

Yara Shahidi appeared to be inspired by the SAGs statue behind her, just with more tulle. Julia Roberts will say otherwise, but there’s something innately wrong about pants under a skirt.

Constance Wu slayed with her fabulous dress but again, the bedazzled cheap-looking shoes should have been kicked to the kerb.

Sydelle Noel looked like she’d stepped off a 1970s album cover or from the same nightwear shop as Madeline Brewer. Awesome colour dress.

Michelle Yeoh, there’s a time for feathers and sequins and sheer panels and glitzy bags. It was about seven years ago.

Crazy Ex-Girlfriend’s Rachel Bloom looked like she’d lost the will to live before she got dressed. Dated hair, ‘greige’ colour, needed a press. In the bottom three of the night.

Rachel Brosnahan won a stack of gongs but not for her fashion. Pretty, bland, done before, the sort of dress brides choose for their bridesmaids if they don’t want to be outshone.

Robin Wright teamed junkie hair with a dress reminiscent of a Glomesh handbag or the tops the models wore on Sale of the Century in the 1980s.

Gayle Rankin was original and slightly punk in a girlie way. The rocking horse bag is a change up from the glitter minaudiere but smacked of a souvenir she picked up at a German Christmas market.

Danai Gurira was pure glamour. If you have a thing for feathers, this is how they should be done.

Best and worst dressed at the SAG Awards 2019