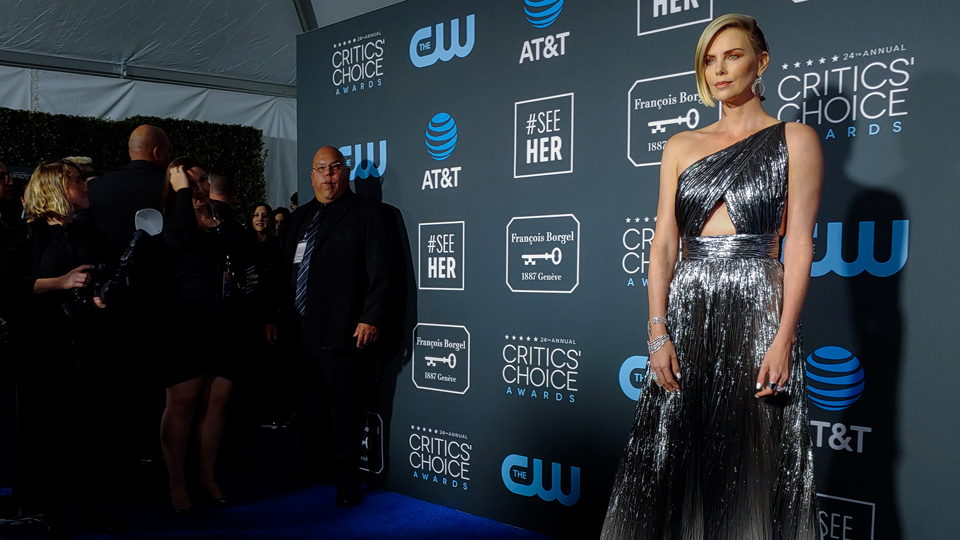 The Critics’ Choice Awards saved the best for last when Lady Gaga and Glenn Close tied for best actress at the end of the night.

Close won for The Wife and Gaga for A Star is Born.

“I’m so thrilled, I can’t tell you,” Close said, while a weeping Gaga – she tripped on her way to the stage and spilled water on herself – hugged her.

The singer-turned-actor waved away the music that played at the end of her speech when stretched her spotlit moment too long: “It’s OK, I can still do this with a piano background.”

Unusually, it wasn’t the only tie of the awards on Sunday night (US time) at the Barker Hangar in Santa Monica: Amy Adams (Sharp Objects) and Patricia Arquette (Escape at Dannemora) also drew for best actress in a limited series.

Model Chrissy Teigen didn’t win an official award, but took home the honorary gong for best confected drama after being kicked out from behind a bar as her amused husband John Legend watched on.

Teigen admitted she was hungover after partying hard with Kim Kardashian and Kanye West at Legend’s 40th the night before.

“Yes this is a fancy problem,” she tweeted on Sunday.

One thing that might have cheered up Teigen? She was on point with her Maison Yeya dress, with white, black and palest pink being the most dominant colours on the blue carpet.

Mandy Moore almost got away with the side cutouts because of her belt and perfect Morticia Addams hair.

Pose’s Indya Moore was near perfection in a pleated dress that was both totally demure and super sexy. But the headband was suss.

Poppy Delevingne was classic and dull in Oscar de la Renta. The criss-cross back was fabulous so she should have walked backwards.

The satin-look pantsuit with cigarette leg may also have had its day, Rachel Brosnahan. A touch down-on-their-luck ringmaster.

Elizabeth Olsen took things to the dark side in a plunging mini that looked more date night than awards night.

Laura Dern shimmered in black sequins and undone hair. The belt elevates it from having bargain-bin potential to pretty great.

Claire Foy looked worried her one-shouldered halterneck jumpsuit might be tricky to wrangle in the bathroom. Rightly so. Worth it though.

Nicole Kidman was one star who went for black and white in an sculptural Armani Prive dress with half-up hair and Cleopatra eyes.

Olivia Munn had apparently come from a flamenco beach party in polka dots that said clown more than class.

Julia Roberts’ love affair with a pant and skirt combo continued. She might need to sit down and talk to someone in a safe space.

Sandra Oh: I long to go to the disco with you. Coolest chick going around without trying. Excellent hair.

Nina Dobrev was widely panned for her scarlet lace, which may have failed Joan Rivers’ old Fashion Police test: Would someone be moved enough by this to want to tear it off you for salacious reasons?

Kirby Howell-Baptiste, you are my new style spirit animal.

Lucy Boynton looked like a renaissance bride ready for bed on her wedding night. Quite beautiful and eccentric, but it’s a lot.

Maggie Gyllenhaal came as an aristocratic extra from The Crown.

Amy Adams as Joan Collins circa 1982.

Who said print is dead? Not Judy Greer, who made a statement.

Crazy Rich Asians’ Awkwafina proved there’s no such thing as too many sequins.

Amid the fashion honours, there were also notable awards winners. Roma, Christian Bale,The Favourite and Gaga all won two.

BEST ACTRESS IN A COMEDY: Olivia Colman, The Favourite