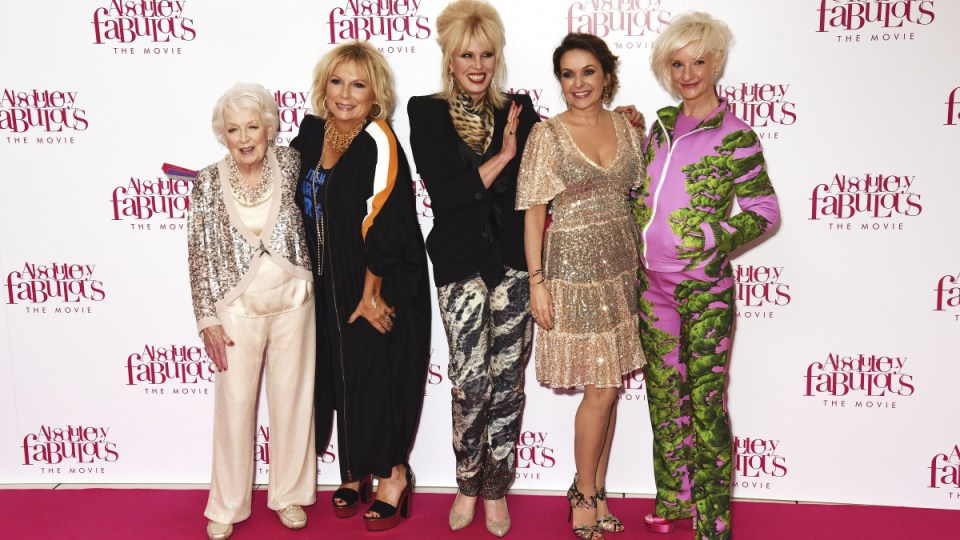 June Whitfield (far left) with the Absolutely Fabulous cast for the movie premiere in 2016. Photo: Getty

The star enjoyed a career stretching back to the 1940s, including roles in the Carry On films and the long-running sitcom Terry And June.

She was made a dame in the 2017 Birthday Honours for her services to drama and entertainment in a career spanning eight decades.

The star is also well known for playing the mother of Jennifer Saunders’ character Edina Monsoon in the hit BBC show Absolutely Fabulous.

Best line ever: I tried it once & didn't like it!! #TerryAndJune#carryonabroad pic.twitter.com/x2435KGAZD

“Her spectacular career is unparalleled in its longevity with seven decades of being a key element in numerous high profile and successful shows.

“She was the go-to female comedy performer of her generation and was always in demand from the cream of British comedy. She led the way for female comedy and we owe her enormous respect.

Actor and comedian Miranda Hart tweeted to say that Dame June’s death was “so very sad”.

She added: “I once sent a letter to many actors as a budding (I mean desperate) comedy actor to ask for sponsorship for the Edinburgh Festival.

“Dame June replied. Fifteen years later when I met her she had all my letters and the notes of the show she sponsored.

Television producer Jon Plowman, who worked on episodes of Absolutely Fabulous and the 2016 film version, tweeted to say he was “very sad” to hear that Dame June had died.

He wrote: “There was no one with more warmth or a better ability to just ‘place’ a line, always an act of utter precision. Hit after hit! Take it from Here, Terry and June, Absolutely Fabulous over seven decade. A great loss.”

Actress Julia Sawalha, who played Dame June’s straight-laced granddaughter Saffy in Absolutely Fabulous, said: “Thank you Dame June Whitfield for teaching me my craft with such grace and dignity.

“I always wanted you to know how in awe of you I was, however, you were always far too humble to accept my adoration.

“You were a great source of inspiration to me. Bye-bye Gran.”