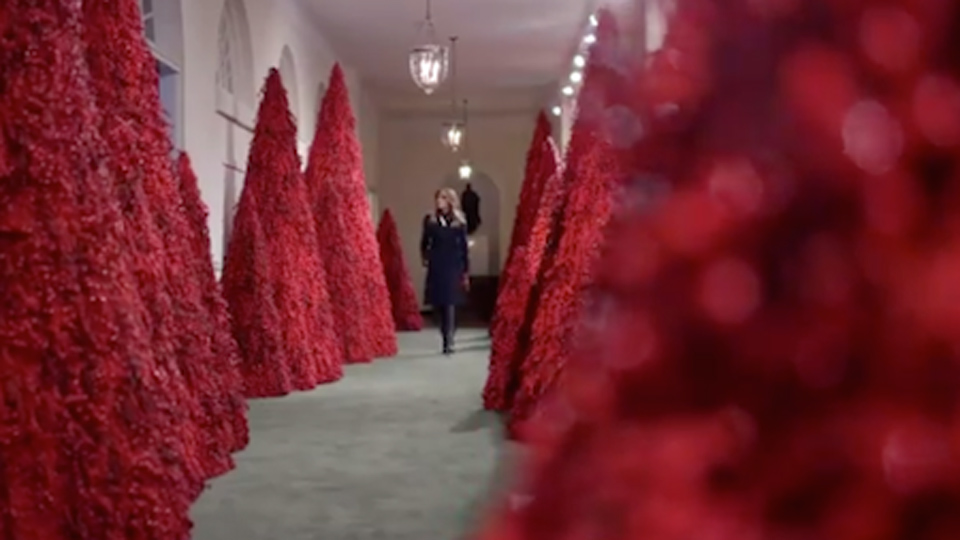 Melania Trump has again given the world an early festive gift with the unveiling of the 2018 White House Christmas decorations on Monday (US time).

Last year, Mrs Trump’s Christmas theme relied heavily on an indoor forest of witchy white trees and shadows that suggested Voldemort was about to come back.

It saw the White House dubbed “the most terrifying domestic space in America”.

For her second crack at it, FLOTUS has again gone back to the super creepy well. This time, she’s lined the East Wing hallway with a phalanx of undecorated red trees.

The 40 topiary-style trees have captivated people online with their colour and general air of menace.

The crimson theme continued elsewhere, with 14,000 red ornaments hanging on 29 trees in the Cross Hall and Grand Foyer.

To showcase her work, Melania kept up her now-traditional Christmas act of releasing an expertly-produced video during which she runs an eye over the decorating feats.

This year, looking like a Ralph Lauren ad come to glossy life, Melania is seen inspecting the decorations in a shrobed coat and – in a few select scenes – a pair of emblematic red gloves.

The People’s House @WhiteHouse is ready to celebrate Christmas and the holiday season! pic.twitter.com/oejKW3mC15

A special musical piece that is equal parts elevator music and aspirational commercials for retirement villages plays while Mrs Trump occasionally reaches up to tweak a wayward bauble.

Speaking of, the camera captures two ornaments that have special meaning to Melania and her US President husband Donald Trump, 72.

First, there’s a soccer ball bauble in honour of Mr Trump’s fondness for the world game. It’s also perhaps a Christmas homage to Vladimir Putin, who in July gifted Barron Trump, 12, with a soccer ball that was rumoured to contain a special transmitter.

There’s also one inscribed with “Be Best”, the name of Melania’s public awareness campaign.

A highlight that might inspire creative types to try this at home is a wreath made from Be Best pencils.

“This is a joyous time of year when we decorate the White House for the Christmas season,” said the First Lady in a non-religious statement.

“Our theme honours the heart and spirit of the American people. Thank you to the many volunteers and staff who worked hard to decorate the halls of the People’s House in Christmas cheer.”

According to the White House, the colour represents the stripes found on the presidential seal, signifying valour and bravery. Not everyone saw it that way, with memes inspired by the Christmas visuals popping up instantly.

“So Melania decorated the White House for Christmas – with blood red trees right out of The Shining: Holiday Version,” noted one Twitter user. A second said she was subtly sending out a “Code red”.

Others compared Mrs Trump’s expensive vision to the cloaks in The Handmaid’s Tale and it was noted the “Hell on Earth Christmas tree aren’t very subtle.” 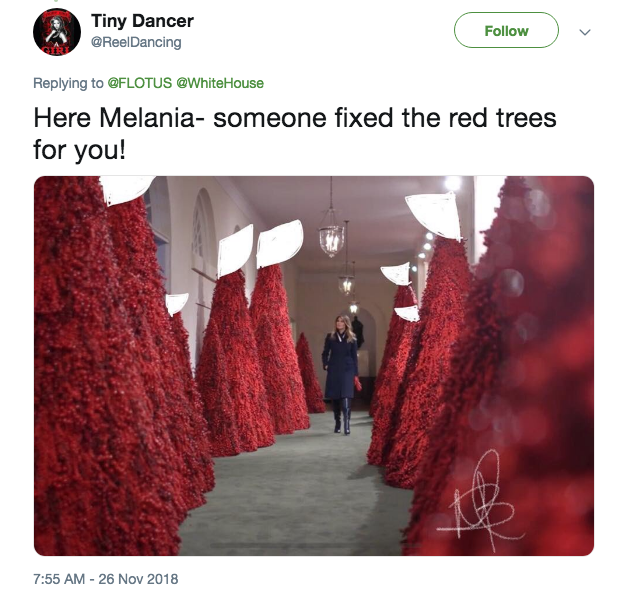 The first lady, 48, kicked off the decorations game plan as early as August, according to a White House statement.

Apart from the unusual trees, there are plenty of commemorative touches in line with the “American Treasures” theme, including gingerbread versions of the National Mall, the Capitol, the Lincoln Memorial, the Jefferson Memorial, the Washington Monument and the White House itself.

In the Blue Room, a 5.4-metre Fraser fir tree hand-selected by a special tree association and cut from a North Carolina farm is decked with more than 150 metres of blue velvet ribbon embroidered in gold with each state and territory.

“On behalf of my family, we wish everyone a very Merry Christmas and a Happy New Year,” Mrs Trump said.