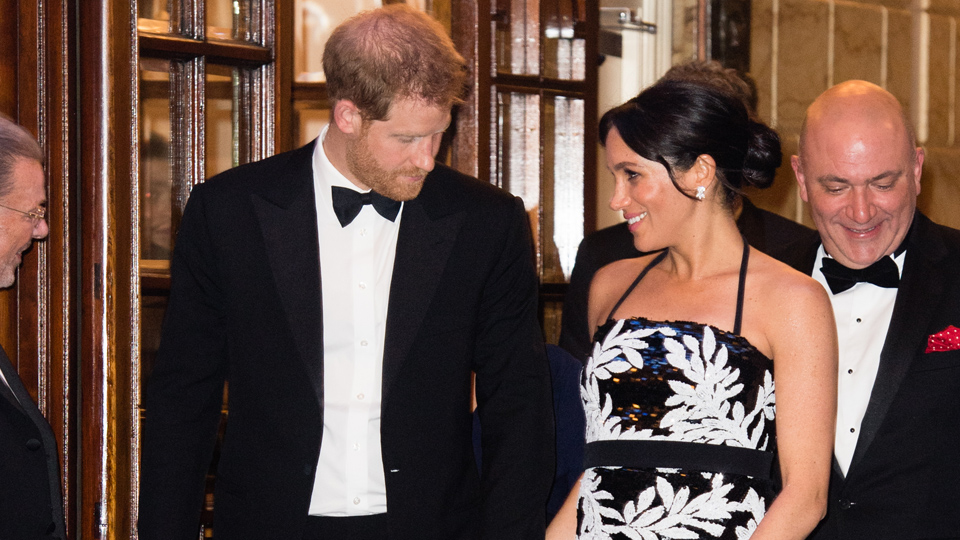 G'day baby: Harry and Meghan at the Royal Variety Performance at the London Palladium on November 19. Photo: Getty

Iconically bogan Australian names Kylie and Shane could be on the shortlist for Meghan Markle and Prince Harry’s first baby.

That’s the inside mail from the unborn royal’s grandfather, Prince Charles, who is perhaps a secret fan of singer Kylie Minogue and cricketer Shane Warne.

“My son Harry tells me that during their recent tour of Australia, he and his wife were offered countless thoughtful suggestions for the naming of their forthcoming baby,” Charles said.

“Just between us, I suspect that Kylie and Shane may possibly make the shortlist.”

The Prince of Wales, perhaps still on a relaxed high from his 70th birthday celebrations on November 14, made the dad joke on Thursday night (UK time) at a reception celebrating the centenary of Australia House in London,  Australia’s oldest diplomatic post.

But Charles, who was watched by his wife the Duchess of Cornwall, 71, said two other names were probably less like to make the cut for Baby Sussex.

“Ladies and gentlemen, I would not hold your breath for Edna or Les.”

Comedian Barry Humphries, best known for his TV and stage alter egos of Dame Edna Everage and Sir Les Patterson, was among the guests, as were author Kathy Lette and actor and dancer Adam Garcia.

Harry and Meghan, who wed in a multicultural and celebrity-studded ceremony on May 19 at Windsor Castle, are expecting their first baby early next year.

Since their busy royal tour of Australia, Fiji, Tonga and New Zealand last month which saw the jet-lagged pregnant duchess waking at 4am to do yoga before long days in the spotlight, the couple has done just a handful of public engagements.

Wearing a burgundy dress and coat by Club Monaco with Givenchy ankle boots, Meghan – who whipped on an apron – made a visit on Wednesday to help cook 200 meals for locals at the Hubb Community Kitchen in west London.

One of her pet projects, the kitchen is now open seven days a week thanks to funds raised by the Together: Our Community Cookbook for which Meghan, 37, wrote the foreword.

Over 71,000 copies of The New York Times bestselling book have been sold since its September launch.

Across town the same day, Kate Middleton was also out and about. The Duchess of Cambridge, 36, dropped in to a neuroscience lab to learn how children develop emotionally and socially.

Meanwhile, at the Australia House reception Charles – who went to Geelong Grammar School as a teenager – spoke of his “deep and abiding” affection for Australia.

After unveiling a new portrait of himself by Australian artist Ralph Heimans, the prince described Australians as “frank, generous, courageous, resilient and above all great fun”.

Humphries, 84, said he appreciated the prince’s own sense of fun, calling his name jokes “wonderful. He spoke very, very well. I have never heard him better.

“It was a special event for we Australians and it is in a building that is unique.”

Australian artist Ralph Heimans painted a portrait of The Prince of Wales, which was unveiled tonight at @AusHouseLondon, in honour of HRH’s 70th birthday. pic.twitter.com/75wpTl6VA7

Australia House, the home of the Australian High Commission in the United Kingdom, was officially opened by King George V in August 1918.

Humphries described it as a treasured “home away from home for Australians”.

Meghan and Harry could name their baby Kylie or Shane