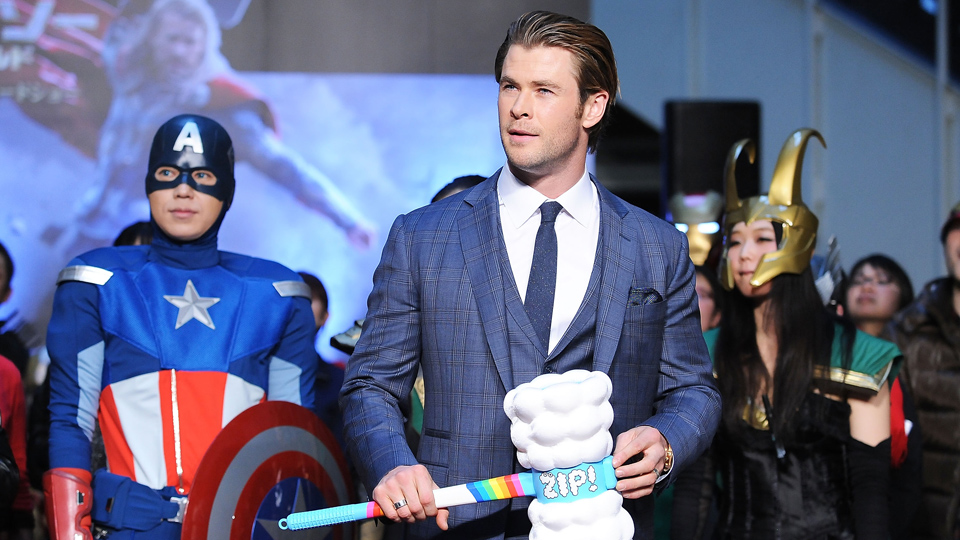 Take that, DiCaprio: Chris Hemsworth at the Tokyo premiere of Thor: The Dark World in 2013. Photo: Getty

A-listers are such an exclusive group that they like to hang together to talk buying tequila companies and public good deeds. But not, it seems, if you’re Leonardo DiCaprio.

The Oscar winner snubbed fellow Hollywood heavyweight Chris Hemsworth not once, but twice, when the pair were bunking down in suites in the same five-star hotel.

The story of Hemsworth being given the cold shoulder by DiCaprio was told on Thursday by the Australian star’s personal trainer Luke Zocchi on Nova FM’s Fitzy and Wippa Show.

“Poor Chris. We were on a press tour for Thor 2,” recalled Mr Zocchi.

“We were in Japan, we were staying at the Ritz Carlton and DiCaprio was there with his whole posse. There was, like, 10 of his crew there.”

“Chris was reaching out to [DiCaprio’s] publicist going, ‘Get Leo, I want to have a beer with him,'” said Mr Zocci.

Hemsworth’s surprise at not being able to score buddy time with DiCaprio was compounded a couple of days later, when he saw his fellow actor across the hotel lobby and tried to catch his attention.

“I remember Chris waving and I remember turning and DiCaprio’s marching through the lobby with 15 dudes and he just walked straight past Chris,” Mr Zocchio told the radio pair.

In six years, Mr Zocchi has trained his childhood friend for 13 movies. Hemsworth showed off the regimen, which includes lifting and high intensity interval training three to four times a week, on Instagram on November 14:

The character I’m playing at the moment is ex-military so I’ve been mixing up my training working with a few super humans with military backgrounds – the focus is on strength, speed, mobility and little to no rest to build endurance. Feeling goooooooood!Also been working on the sound I make after side kicking the heavy bag yeoooooooow 💪💪👍👍🤙🤙😁😁 #giveitacrack

The spurning of advances may be something new for DiCaprio, who has a reputation for enjoying being surrounded by friendly faces.

In December 2014, it was reported that The Wolf of Wall Street’s leading man left a Miami club with 20 women in tow.

According to the New York Daily News, Leo partied into the wee hours at an Art Basel event in South Beach with singer Joe Jonas, now the fiance of Game of Thrones‘ Sophie Turner.

When Leo – an environmentalist whose well-documented jetset lifestyle leaves a considerable carbon footprint – had had enough, he reportedly rounded up every woman in the VIP area and sailed off with them.

“He was overflowing with models everywhere. The Jonas brother looked scared.”

It wouldn’t be much balm to Hemsworth’s feelings that the American star has famously travelled the world for the past couple of decades with a pack of trusted bros that New York called “glorified man purses”.

According to a profile in the magazine back in 1998, Leo’s crew went with him to work, acted as “unofficial” bodyguards and “even carried DiCaprio’s cash”.

On the February 2016 night his role in The Revenant finally won him a best actor Academy Award, DiCaprio tore up the Vanity Fair after party with actor friends Lukas Haas and Tobey Maguire.

According to the Daily Beast, the men passed their night with old-school “ritualistic” chanting.