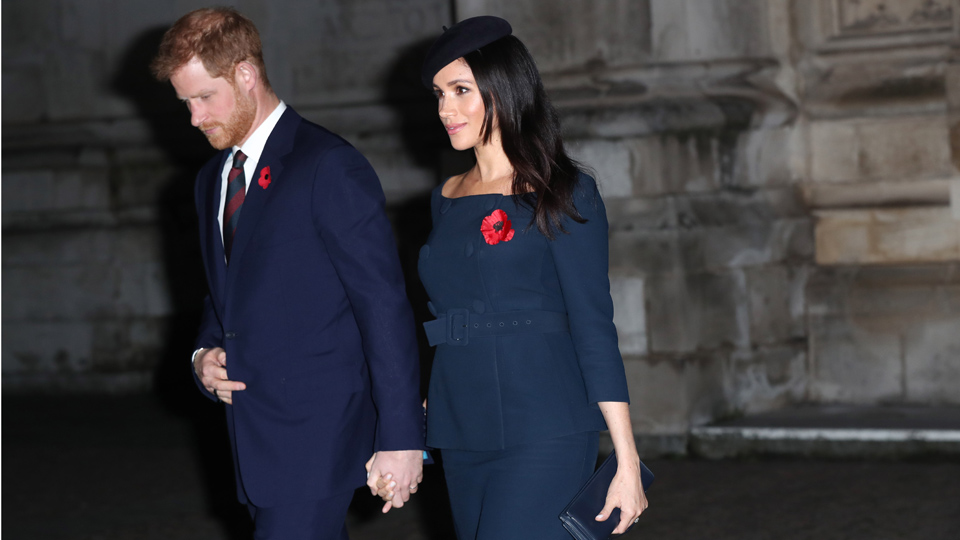 A twinning Duke and Duchess of Sussex and what they call "our little bump" on November 11 in London. Photo: Getty

Exactly six months into her new life as a royal, the artist formerly known as Meghan Markle has mastered multiple arts intrinsic to a happy life as a Windsor: Dressing for a royal tour, forging a bond with the monarch and confident public speaking.

She’s also had to endure wearing nude stockings, ‘tiaragate’ and problems with the help – more of that later – and there’s one thing about her husband Prince Harry that is driving her nuts.

In the BBC documentary Prince, Son and Heir: Charles at 70, Harry came clean about his life-long “obsession” – drummed into him by his father – of turning lights off when he leaves a room.

“I don’t know if your wife does it but my wife certainly goes, ‘Well, why turn the lights off? It’s dark’,” Harry told brother Prince William on camera.

Going public with his thriftiness is one thing, but Harry, 34, may be less keen to share if reports are true that his personal finances may soon come under scrutiny thanks to his marriage.

The problem? The taxman.

Despite knowing people in high places, the duchess “cannot start the process of becoming a UK citizen until she is married three years”, royals expert Marlene Koenig told Time.

“And when she has acquired British citizenship, she will need to make a decision on whether or not she renounces her US citizenship.”

In the meantime, Meghan, 37, will still have to pay tax in America – one of only two countries that taxes expats – on any income earned or allowances received, according to various media reports.

She has a personal fortune of $6.8 million from her former $616,000-a-year Suits contract, according to Fortune. While she no longer draws a permanent salary from the legal drama, she gets royalties from reruns.

That’s her business. But in an unprecedented turn of events, all royal proceeds enjoyed by Meghan, 37 – jewels, couture wardrobe, rent-free home at Kensington Palace – could also possibly be in the taxman’s sights.

“We’re looking at a level of financial exposure the royal family has never had to face before,” royal aides were quoted as telling The Sunday Express.

Prince Harry’s income could be scrutinised, including the annual $526,800 he draws from the $35 million trust funds set up by Princess Diana and the Queen Mother.

The duke pays income tax on that allowance. But now that Meghan has access to the money, it could count as hers, too.

“It’s the royal household’s worst nightmare … Everything has to be declared,” said the aides.

“That means a level of fiscal openness and scrutiny the royal family are not used to.”

Fans of the pregnant duchess can rest assured Meghan won’t be hunched over a bar heater at Kensington Palace, trying to fill out tax forms. In-house money whizzes will be handling it, leaving their new recruit to get on with the PR business of being a glamorous mother-to-be.

Even pregnant and jet lagged, the inexperienced duchess barely skipped a beat on her tour with Harry of Australia, New Zealand, Fiji and Tonga last month.

☔ On a wet day at the spectacular Abel Tasman National Park, The Duke and Duchess of Sussex learned more about its conservation programmes with @docgovtnz Ranger Andrew Lamason, met local iwi and children involved in conservation projects. #RoyalVisitNZ #NewZealand #AbelTasman

But there are reports her energy levels and perfectionist nature are testing some palace staffers.

An alleged royal insider told the Mail on Sunday Meghan starts her day at 5am and “bombards” staff up to seven times a day with requests and ideas on shaping her role.

Not everyone loves Meghan being her best her.

It’s been reported that three aides have quit since Harry and Meghan’s May 19 wedding, including a personal assistant to the duchess, according to The Daily Mail.

A palace source said the “hugely talented” staffer, identified only as Melissa, “played a pivotal role in the success of the royal wedding”.

UK tabloid The Sun claimed earlier this month the “difficult” former actor has “clashed” with Kate Middleton, 36, over the treatment of staff.

“She has very high standards and is used to working in a Hollywood environment,” a royal insider was quoted as saying.

The veracity of the reports was not confirmed by Kensington Palace. Neither were reports earlier this month that Meghan and Harry both threw tantrums before their wedding over which tiara she would wear.

The Times reported that it “understood” Meghan wanted to wear one set with emeralds, but it was ruled out because its provenance was uncertain.

According to The Telegraph, there were “temper tantrums” when Meghan was told to choose another, leading to a “very heated exchange” witnessed by the Queen and her dresser Angela Kelly.

Quoting a “well-placed royal insider”, The Sun said the incident “prompted” the Queen to tell Harry, “Meghan cannot have whatever she wants”.

Meghan gave her side of the story in a personal recording done for a new royal wedding exhibit at Windsor Castle, calling the selection of her tiara at Buckingham Palace “an incredibly surreal day”.

Meghan’s six months as a duchess: Problems with the help, Harry and the taxman