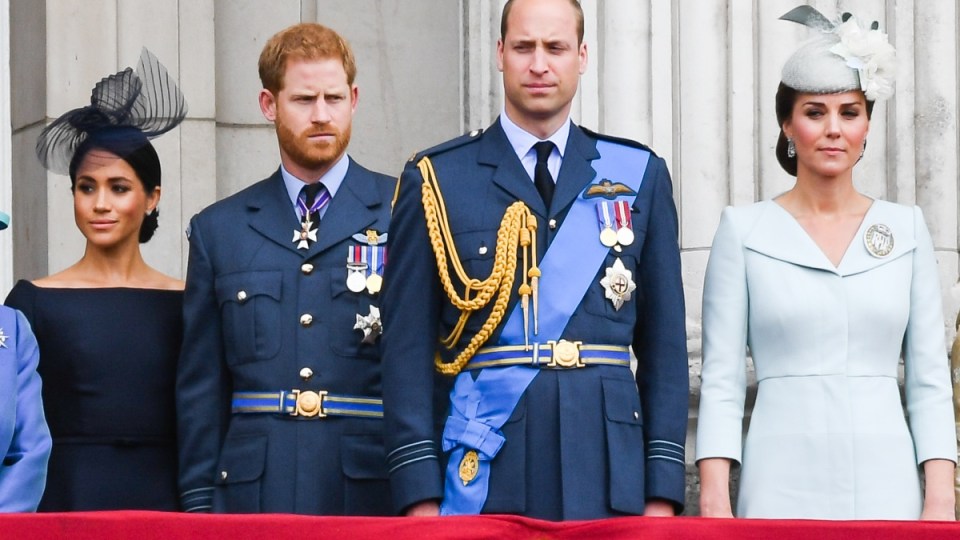 Since Prince William and Kate Middleton wed in 2011 and became the glamorous Cambridges, they’ve been inseparable from Prince Harry.

All young, rich and famous, their business and private lives are literally forever intertwined. They all live at Kensington Palace – Harry admittedly in the more modest Nottingham Cottage while Kate and William have the fancy Apartment 1A – and also work together, thanks to their joint Royal Foundation Trust.

It’s not just William who is close to Harry. He and sister-in-law Kate are best friends; she was one of the first royals to be introduced to Meghan Markle and the pair have often been photographed laughing together at family functions.

Three months before Harry married actress Meghan in May, the trio let her join their band. The royal fab four made their first public appearance on February 28, sitting on stage together and talking about their shared future projects at the Royal Foundation Forum.

But now, with Meghan and Harry expecting their first baby, there’s buzz the band could be breaking up.

“The arrival of Meghan has changed the dynamic of the relationship in a fairly significant way,” royals author Sally Bedell Smith told People magazine.

“It is inevitable and practical because it gives Harry and Meghan some freedom to build up their own collection of interests and charities.”

The onetime Suits star’s personality may also be a factor, according to Ms Bedel Smith: “Meghan has very strong views on what she is interested in and that may be what Harry shares, but not what William and Kate share.”

Added the royals expert, “I think it really is just a shift in priorities and interests. William is a husband and father of three and his focus is primarily on them, and Harry will soon be a father.”

The idea of the foursome disbanding was first raised by UK newspaper The Sunday Times, which said William, 36, and Harry, 34, were considering splitting their joint “court” into two separate offices.

The story claimed the move could happen after Meghan, 37, gives birth early next year.

Kensington Palace had no comment on the report, which said William, as eventual heir to his father Prince Charles, will forge a different path to the more liberated Harry and Meghan.

Certainly, the Duke and Duchess of Sussex showed they were in harmony as an independent  twosome during their tour last month of Australia, New Zealand, Tonga and Fiji.

Bending royal protocol, they were constantly physically affectionate during their engagements, holding hands on the Opera House steps, on Bondi Beach and sweeping into official dinners in black-tie best.

Now in her second trimester, Meghan – who said before her marriage she planned to “hit the ground running” to support women’s issues when she became part of the Windsor family – was a royal revelation when she was on the job.

While Kate, 36, rarely makes speeches of more than a few carefully rehearsed sentences because she is anxious about fluffing them, supremely confident Meghan is the opposite.

"Bravo New Zealand for championing the right of women to vote 125 years ago." — The Duchess of Sussex, as she and The Duke joined PM @JacindaArdern and @GovGeneralNZ Dame Patsy Reddy to celebrate the 125th anniversary of women's suffrage in New Zealand. #RoyalVisitNZ pic.twitter.com/zpFhyPiE8r

Used to learning lines and being on song in front of cameras, she made an unprecedented three speeches during the tour with her husband, including a strong endorsement of feminism during a celebration of the 125th anniversary of women’s suffrage in New Zealand.

She also started putting her own stamp on the couple’s social media presence.

Since she shut down her personal accounts after her engagement a year ago, Meghan has relied on the palace’s communications experts to get across her and Harry’s message across. But in Sydney on October 27, she officially returned to social media.

The duchess shared a snap of Harry rehearsing his speech for the Invictus Games closing ceremony. A source told The New Daily Meghan did more than just photograph her man and actually drilled him in his lines until she was happy with the delivery.

Harry then jumped on the bandwagon, taking and sharing a photo of his wife cradling her baby bump under a giant tree in New Zealand.

A message from The Duke and Duchess of Sussex: “Thank you New Zealand for the most wonderful last week of our tour. It has been a privilege to meet so many friendly Kiwis. Australia, Fiji, Tonga and NZ – we leave feeling inspired and reminded of how every single one of us can make a difference.” ‘The rain that refreshes the parched ground, is made up of single drops’ – Kate Sheppard #commonwealth 🇳🇿🇦🇺🇫🇯🇹🇴 📷 The Duke of Sussex

Any separate offices and social media accounts probably don’t also mean the foursome will break up their foundation, under which they run their flagship mental health campaign, Heads Together.

“They have brought many charities working in the same sector together to empower them and lend their positions,” Ms Bedell Smith told People.

“But they will increasingly follow their own respective interests.

“Each of them will continue the very strong representative of the Queen in carrying out tasks and assignments that she, and probably their father, wants them to do.”

Not-so-fab four: Harry, Meghan, Kate and William could be breaking up