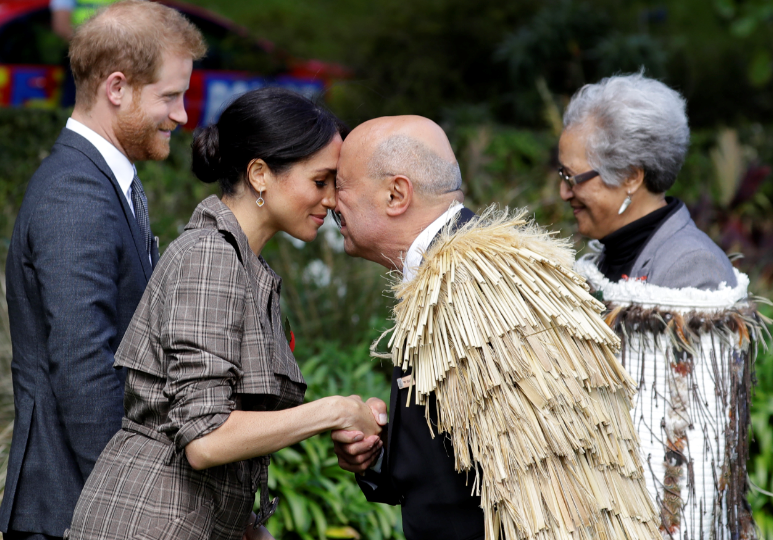 They love a sunburnt country and can’t wait to return for more of that unique Australian warmth and welcome that made Harry and Meghan’s Downunder jaunt such a huge success.

It started with the announcement that the Duchess of Sussex is pregnant, hit an emotional high point at the Invictus Games and concluded as it began with smiles, hugs and a public enthusiasm for the royal couple that just couldn’t be satisfied.

With New Zealand the final stop on a 16-day tour that took in Australia, Fij and Tonga, the couple departed Sydney with the thanks of the  Governor-General, Prime Minister and NSW premier still ringing in their ears.

Representing the NSW premier was state Planning Minister Anthony Roberts who said the couple told him they adored Australia.

“Almost three years to the day I was here to meet Prince Charles with my week-old baby who is almost three now,” Mr Roberts said.

It was a windy goodbye for the couple, with Meghan wearing a silken burgundy dress and peach suede heels and Harry in a dark grey suit.

Harry and Meghan boarded a Royal New Zealand Air Force plane for the flight to Wellington just after 10am on Sunday.

Several members of the New Zealand Invictus Games team were on board the flight, which was met on arrival by Prime Minister Jacinda Ardern on Sunday afternoon.

They wound up their official events in Australia at the Sydney closing ceremony of the Invictus Games for war-wounded veterans that Prince Harry founded.

The royal couple joined the 12,000-strong crowd on Saturday night in clapping and cheering throughout the two-hour long ceremony that included performances by Perth rock outfit Birds of Tokyo and the gospel singers from the US-based Kingdom Choir who performed at Meghan and Harry’s wedding in May.

The closing ceremony was the final event on the royal couple’s official itinerary for their 10-day visit to Sydney, Dubbo, Melbourne and Fraser Island.

The Invictus Games was the major reason for the first overseas tour of the royal couple, but they also focused their engagements on the environment, mental health and youth development.

There were several highlights which melted the hearts of many Australians including the times the couple broke protocol giving regular hugs to well-wishers, including war widow Daphne Dunne and a five-year-old Dubbo schoolboy who tugged at the prince’s beard.

They were also openly affectionate with each other and managed to charm everyone they met.

During their four days in Aotearoa, the Duke and Duchess will visit a kiwi breeding centre, see some of the country’s most majestic environs in the South Island’s Abel Tasman National Park, and even join in a gumboot-throwing contest.