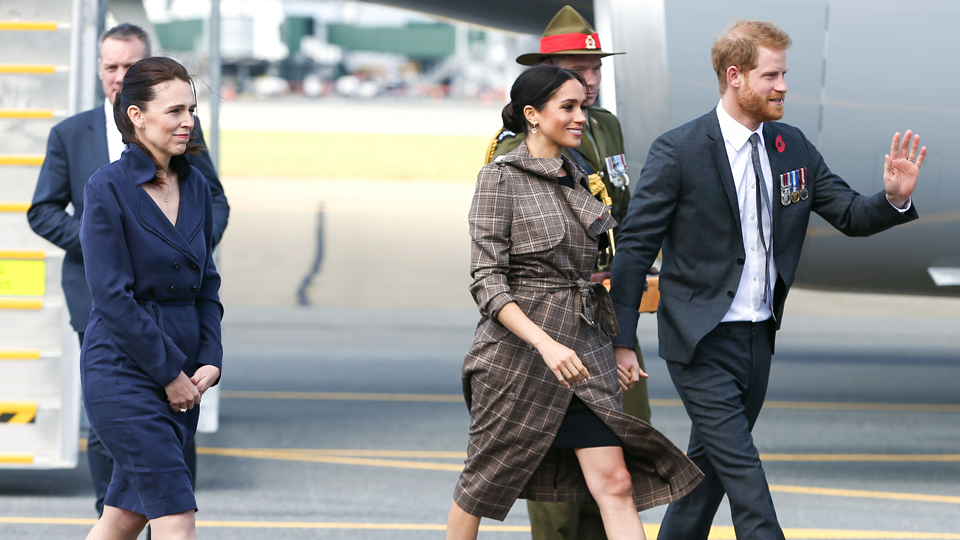 New Zealand PM Jacinda Ardern greets the Duke and Duchess of Sussex on the tarmac in Wellington. Photo: Getty

When she gave birth to daughter Neve in June, Jacinda Ardern said it was “mind blowing” to receive warm wishes from Meghan Markle and Prince Harry. On Sunday, the (baby) boot was on the other foot when the New Zealand PM got to congratulate the royals on their own impending blessing.

Meeting the Duke and Duchess of Sussex on the tarmac at a Wellington airport in the afternoon, a beaming Ms Ardern shook hands before chatting to Meghan and ushering her towards the terminal.

Both women had got the brief on what was needed for the windy weather: a trench coat (Meghan’s by New Zealand designer Karen Walker, worn over an ASOS maternity dress) and firmly anchored hair.

Climbing the stairs of their Royal New Zealand Air Force plane in a similarly gusty Sydney earlier in the day, Meghan found herself in strife.

She had to drop Harry’s hand – the newylweds have barely let go of each other on their first international tour – to simultaneously tamp down her loose hair and her Hugo Boss burgundy dress, which she changed out of during the flight.

Also on the flight were members of the NZ Invictus Games squad.

The PM soon posted the royals’ arrival to Instagram, where one follower said Ms Ardern had baby Neve with her at a VIP lounge at the airport.

A warm but windy welcome to Wellington!

Earlier this month, she said she was uncertain whether to send congratulations when the Sussexes announced their baby news in Sydney, or wait until their face-to-face meeting.

“It will be really lovely to be able to do that in person,” she told a New Zealand breakast TV show on October 16.

Asked if she would pass along any parenting advice to the mother-to-be, Ms Ardern laughed.

“Oh, no, no. One thing you learn is that everyone has advice, and I loved that everyone wanted to share their tips and tricks,” she said of her own experience.

“But not everyone will necessary want advice.”

With her partner Clarke Gayford as baby Neve’s full-time stay-at-home parent, Ms Ardern did agree she could recommend that Harry be a hands-on dad.

“Why not? They both obviously have a lot of duties. I’m sure they’ll be doing a bit of co-parenting and that’s great.”

The PM had her fingers crossed the busy traveling duchess, 37, wouldn’t get morning sickness, “because otherwise it feels like you’ve got constant motion sickness, which isn’t pleasant,” she told Newshub.

After the airport meeting, the royals were whisked away to a traditional Maori welcoming ceremony on the lawns of Government House, where they both expertly pulled off a hongi, the famous nose kiss of New Zealand.

Meghan’s technique? Close your eyes and do a Mona Lisa smile.

When a local group performed a haka, Harry appeared to ape the moves, crouching down in front of the performers.

The Māori Welcoming Party performs a Haka imitating the hauling of a canoe ashore, known as Haka Pōwhiri, the Dance of Welcome. #RoyalVisitNZ pic.twitter.com/9pRCnUU5D7

Cultural activities done, the couple laid a wreath at the Tomb of the Unknown Warrior at Pukeahu National War Memorial Park, then received calls at Government House from the Leader of the Opposition and Ms Ardern.

The Duke and Duchess of Sussex arrive with Prime Minister @JacindaArdern for a reception hosted by @GovGeneralNZ Dame Patsy Reddy at Government House. #RoyalVisitNZ pic.twitter.com/PmF93kXwzT

A polished, word-perfect Meghan made her third speech of the tour at the reception, scoring cheers from the crowd when she began with a formal Maori greeting before getting more political than most royals do.

“Women’s suffrage is not simply about the right to vote for women, but also about what that represents, the basic and fundamental human right of all people including those members of society who have been marginalized,” the former actress said.

“In the words of your suffragette Kate Sheppard, all that separates, whether of race, class, creed or sex, is inhuman and must be overcome.”

"Feminism is about fairness”👏🏻👏🏻👏🏻👏🏻 pic.twitter.com/1ELhftxVAs

When Harry and Meghan met Jacinda