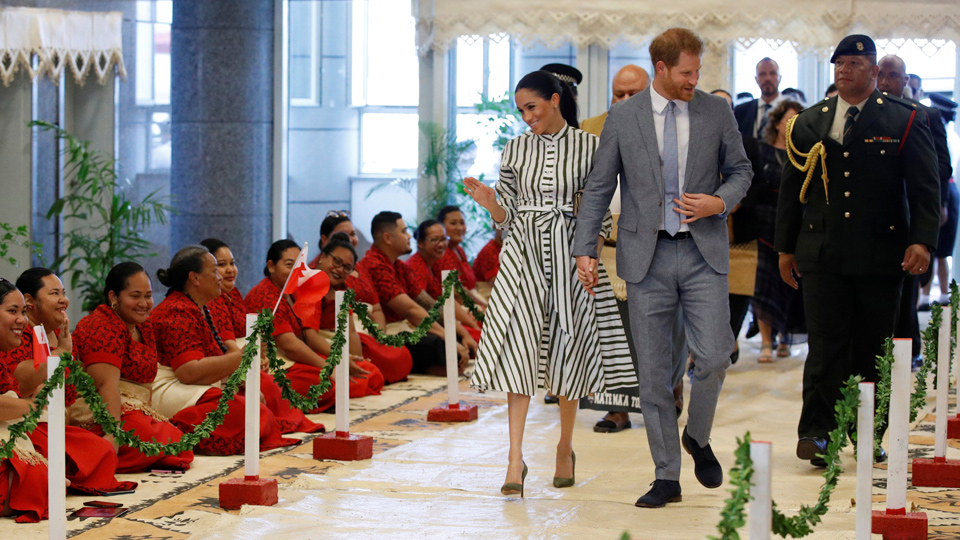 The Duke and Duchess of Sussex at St George's Government building on October 26 in Nuku'alofa, Tonga. Photo: Getty

If their flight from Tonga goes smoothly, Prince Harry and Meghan Markle are due back on Australian soil about 3.30pm on Friday.

The almost-four hour flight from the Pacific island nation would have meant the Duke and Duchess of Sussex could kick back after a hectic morning.

Still to come on Friday night: the royal expectant parents will be guests-of-honour at the Australian Geographic Society Awards in the Grand Ballroom of Sydney’s five-star Shangri-La Hotel.

Harry, 34, is scheduled to make a speech, and he and Meghan, 37, will present youth awards to honour achievements in conservation and adventure – right on brand for the Sussexes.

Another change in time zone – two hours – could be tough on Meghan, who is said to be at least four months’ pregnant and has been turning out, fabulously styled, for long days and nights of engagements.

On Thursday evening – recovered from ‘tag gate’, when she stepped off the plane with a swing tag still on her red dress – the duchess stepped out for an evening reception and dinner at the country’s Royal Palace in a white Theia evening gown and serious diamonds.

Last week, taking part in an ‘anti-bad vibes circle’ on Bondi Beach, the former Suits star told a fellow participant she was waking up early on tour to do yoga because she’s having trouble sleeping.

According to the Daily Mail, she told another mother-to-be, Charlotte Waverley, “that pregnancy was like having jet lag.”

Added Ms Waverley, “It’s a bit of a double whammy for her, she said, as she has both the baby and the jet lag to contend with.”

The couple’s day kicked off with a morning meeting with Tonga’s prime minister and Cabinet ministers, with Meghan (carrying a Prada bag) in a striped shirt dress by Paris-based Melbourne designer Martin Grant.

It’s the fourth time she’s worn a Grant design on the tour.

But the duchess’ fashion was overshadowed by a little boy, who flaked out on the floor waiting to greet the royals at a government building. Another pair of children got a smile from Meghan because of their hand-drawn sign: ‘Free hugs’.

After half an hour the parents-to-be headed met with local royal Princess Angelika at an exhibition celebrating Tongan handicrafts and tapa cloths.

They were greeted with leis and traditional taovala – a Tongan half-skirt worn over other clothes – which both seemed to get a kick out of. An animated Harry appeared to do a little jig as a group of singers and dancers did their thing.

Meghan did a quick costume change for her next engagement, fronting up to a visit to a college and rainforest – where she and Harry unveiled the Queen’s Commonwealth Canopy – in a mid-length blue dress by US designer Veronica Beard.

UK royals correspondents including ITV’s Chris Ship raved about the Tongan stopover, saying it was a highlight of the tour. And for sports fans, it dished up one particular special and unexpected treat.

The 34-year-old taekwondo athlete gained fame and sparked memes at the 2016 Rio Olympics as Tonga’s shirtless flag bearer. Earlier this year he did the double, competing in skiing at the Sochi Winter Olympics.

Now he’s added meeting Harry and Meghan to his CV.

What a night! Was an honour meeting Prince Harry, Meghan and their amazing team. Harry’s speech was 👌🏽 #Day2