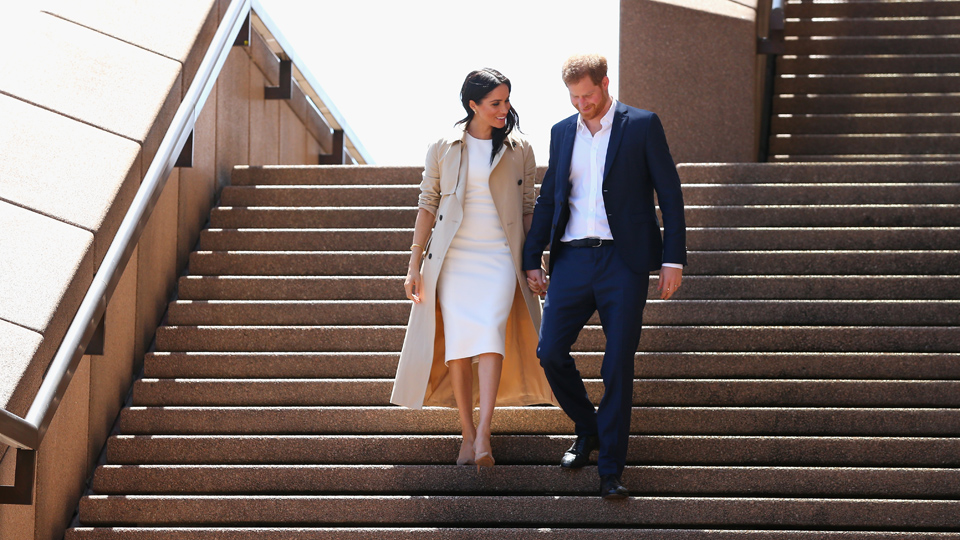 Take it as gospel, in a giant walk-in wardrobe somewhere in the White House, US First Lady Melania Trump is shaking in her signature Christian Louboutins.

Since she became FLOTUS, Melania’s thing has been literal dressing. She owned it from the get-go, from her Tiffany-box blue inauguration suit – an homage to Jackie Kennedy and glitzy wealth – to her Gucci cheongsam in China and her leopard-print pumps.

But now, the former model’s world championship belt has been stolen by someone adding the title to her actual title.

With her debut royal tour still not done, the Duchess of Sussex, 37, has proved she can take literal dressing places nobody has been, adding a layer of virtue to mere symbolism.

Since kicking off her itinerary with husband Prince Harry, 34, on October 16, the former Suits actor has played her role of caring, glamorous royal workhorse to perfection.

Among her crowning achievements? Low-key, but the black, skinny jean she wore with an oversized blazer, white shirt and practical boot to Dubbo on October 17.

Let’s deconstruct the look: the jacket was from her friend, Serena Williams’ fashion line – there’s a plug for a pal that money can’t buy – and the $200 jean from Australian label, Outland Denim.

Launched in 2011 by Queensland couple James and Erica Bartle, the company directly helps survivors of sex and human trafficking in Cambodia.

The Meghan effect (she’s already worn the ethically correct jean a couple of times on tour, including with bag from local label Oroton on October 21) “is phenomenal. It means a lot to our girls in Cambodia that the duchess might wear the jeans that they made”, said Mrs Bartle.

On the first day of the tour, when the Sussexes hit a meet-and-greet at Admiralty House, Taronga Zoo and the Sydney Opera House, Meghan wore an $1800 cream, form-fitting dress from local designer Karen Gee.

She teamed the dress with – and this is where she is so darn good at this – diamond butterfly earrings and a bracelet that belonged to Harry’s late mother, Princess Diana, which he reportedly gifted to Meghan when she found out she was pregnant.

Wearing a label by a niche brand was a feminist triumph, showing Meghan is keen to support hard-working businesswoman such as Ms Gee, a mother of five whose site says all her clothes are made in Australia and have ethical accreditation.

The same day, Meghan switched up her heels for Rothy’s flats (which she also wore a couple of days later to the beach in Melbourne). Their significance? The pointed ballet shoes are budget-conscious and totally sustainable, their upper knits made from “post-consumer plastic water bottles”.

Other culturally, stylishly and morally sensitive nods? Sombre black for the opening of the ANZAC Memorial in Hyde Park and sneakers from Veja, a French company that claims ecological and fair trade conditions and works with co-operatives in Brazil.

That look was terrific but was eclipsed when Meghan went into defcon mode with her royal wardrobe game at a state dinner in Suva, slinking down a staircase with Harry in a Ginkgo cape dress by Safiyaa.

According to reports, the shade of the gown is a Fijian blue, worn in tribute to the country. Nice. The colour coding was a trick Meghan repeated when she arrived in Tonga – national flag colours, red and white – in a red day dress.

Except for the swing tag left on the red dress, this woman’s travel wardrobe has been perfection. Hats off, duchess.

How Meghan has taken down Melania in the literal dressing stakes