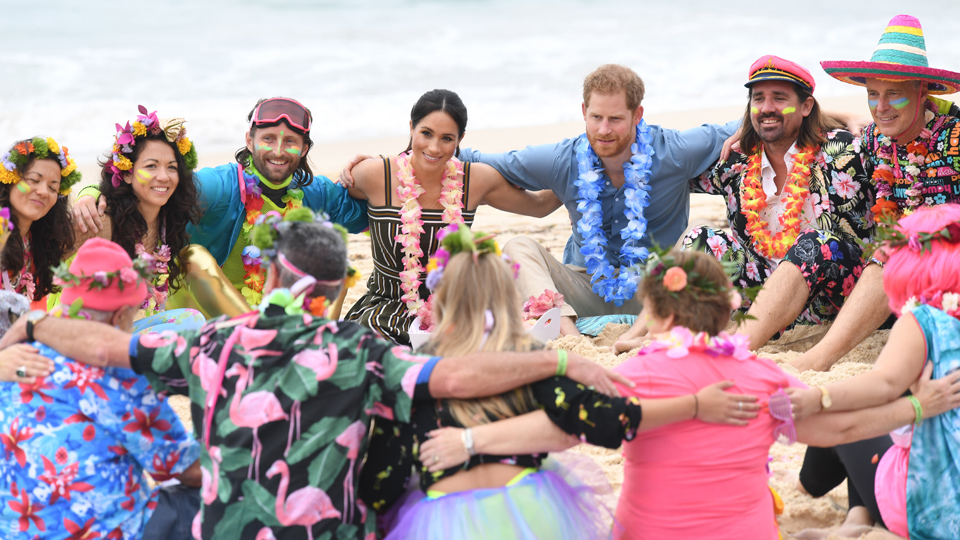 Namaste! The Duke and Duchess of Sussex sit in on the 'anti-bad-vibe circle' at Bondi Beach. Photo: Getty

Proving she might be the most inspiring person ever, Meghan Markle reportedly woke at Admiralty House, Kirribilii, to practice yoga at 4.30am to kickstart day four of her royal tour with husband Prince Harry.

Her chakras aligned, the pregnant duchess, 37, then got even more spiritual, joining with Harry and a local surf group in what was called an ‘anti-bad vibes circle’.

The touchy-feely addition to Harry and Meghan’s day saw them sitting on yoga mats on Bondi Beach, arms draped around the members of OneWave, who talked about mental health with the visiting royals.

Dress code was Fluoro Friday, but the Sussexes didn’t get the memo. Meghan, who cradled her baby bump in an olive and brown $1615 Martin Grant maxi sundress, did kick off her Castaner espadrilles to mesh with the earthy vibe.

When the royals arrived about 8.30am, they were handed floral leis by OneWave co-founders Grant Trebilco and Sam Schumacher to loop around their necks in the spirit of groovy inclusion.

One of the few in the circle who spoke to Meghan was Ten’s The Loop host Liv Phyland, who shared the snippet about the duchess’ early start to the day.

“When you share stories about mental health … it can turn people that you just met into best mates in seconds because you’ve been through struggles and shared them. We had good banter.”

The health initiative founder said he tried to get Harry on a surfboard “but we ran out of time.” Still, the prince waxed a board and he and Meghan were presented with one as a souvenir.

Other presents on the day: an oversized teddy bear and a bunch of carrots.

The latter was a mystery but might inspire the duchess, who allegedly made banana bread to take to Dubbo on Wednesday, to head back to the Admiralty House kitchen and make a carrot cake. 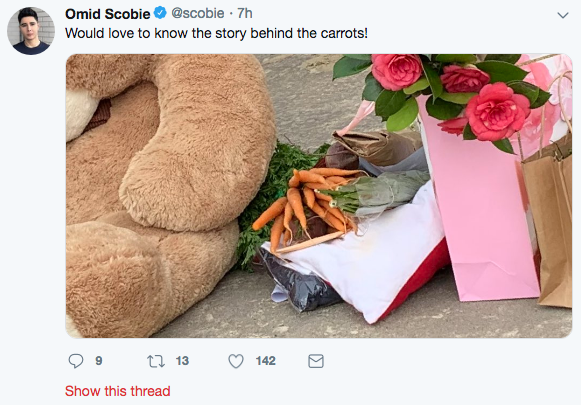 Heavy fog blanketing Sydney early in the day didn’t stop a big crowd gathering to welcome Harry and Meghan. Not found among the throng was Sydney resident Jane Priest, who greatly enhanced the royal family’s beach experience in 1979, when she planted an unexpected smooch on Prince Charles at Cottesloe Beach in Western Australia back in 1979.

After Bondi, where Harry went unkissed by strangers, the pair visited Macarthur Girls High School in Parramatta to talk about their passion projects, social justice and youth empowerment.

Both did a quick costume change along the way, with Harry putting on a sports coat and Meghan slipping into a sleeveless Roksanda navy dress.

💃 A beautiful performance at Macarthur Girls High school, which The Duke and Duchess of Sussex are visiting to to see their inspirational work being done by students in human rights, social justice and women's empowerment. #RoyalVisitAustralia pic.twitter.com/eu4xhLDm4z

In the afternoon, the prince climbed Sydney Harbour Bridge with Prime Minister Scott Morrison to hoist the flag for Harry’s Invictus Games, which start on Saturday.

On hand was arguably his biggest fan, 98-yera-old war widow Daphne Dunne, whose embrace with Harry earlier this week was an emotional highpoint of the tour so far.

The prince and his wife were then scheduled to meet Opposition Leader Bill Shorten, followed by a face-to-face with Mr Morrison.

The ‘anti-bad vibes circle’, baby bump and a social climb: Harry and Meghan work it in Sydney