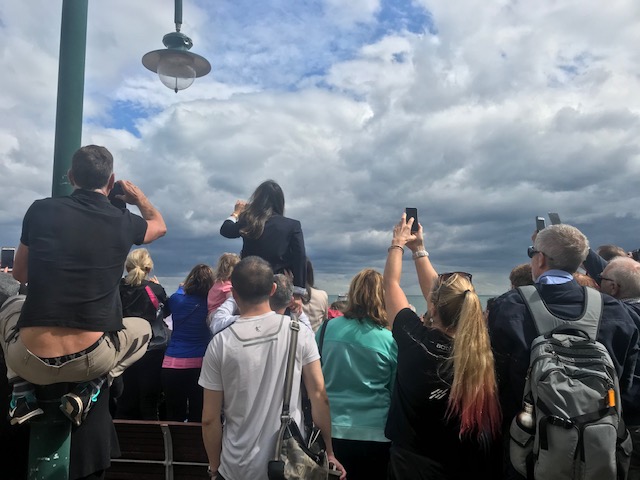 The view of the royals from the cheap seats at South Melbourne beach on October 18. Photo: Kate Halfpenny

What happens if you look up the itinerary of a royal tour, see the beloved Prince Harry and Meghan Markle will be performing 15 minutes from your office, and decide on a whim to check out their form?

There’s a bit more to the story, but the short answer is: prepare to be disappointed.

The plan was only hatched when TV networks screened the Duke and Duchess of Sussex landing in Melbourne on October 18.

Roads were shown being closed lest their Highnesses be subjected to a vulgar red light. Their trip to Victoria, with more cops, choppers and police than a Michael Bay movie, was being paid for by taxpayers.

It was my Commonwealth right to partake, and I was wearing reasonably sensible block-heeled Chloe boots and a Markle-esque black jean. Why not? Action stations.

The Uber dropped us near Government House, where Harry and Meghan would hop out of their Holden and do their schtick.

Truly fervent royals devotees had been lining the barricades since dawn and – armed with plastic tiaras, flags and eyes boggling as if they had thyroid disorders – were impossible to penetrate. It was harder to get to the front than at a One Direction concert … six years ago.

“Don’t touch me,” snapped one matron as the crowd surged forward when buzz spread that Meghan and Harry were almost upon us.

One of the most motivated fans was Nola Ellis, from Devon Meadows.

When she was 15, and the reigning Junior Miss Victoria, Nola met Princess Diana, handing her a koala and hugging her.

“I gave her a round coin from the year I was born and she got a 50 cent piece off someone and handed that back,” said Nola, who was clasping a replica of the coin Diana touched. (The original is in her jewellery box.)

“I’m really pushing to get to Harry and give it to him and say, ‘This was your mother’s’,” she said.

Violence wasn’t necessary, although Nola was good to her word, squeezing to the front and biffing the coin at an unsuspecting Harry, screaming at him to pick it up.

All up, the Sussexes – looking just like their photos, for those interested – were visible for about two minutes. It wasn’t enough to gauge the cut of their jib.

The published itinerary was frustratingly vague, mentioning a lunch and cooking class at an inner-city centre. A colleague had a hot tip the royals were headed to Charcoal Lane, Mission Australia’s social-enterprise restaurant in Fitzroy.

Bingo. Police tape, barricades and an as-yet small crowd. We grabbed a spot opposite, confident of joining Harry and Meghan in that high-five thing they do when hand-shaking is outré.

In the crowd was youth work student Grace Hood, 26. Fifteen minutes earlier, she had been sitting on Charcoal Lane’s stoop eating a chicken and mayo sandwich when police moved her on.

“And I said “How much?’, and they said, ‘It’s not worth it and you won’t get to meet the royals’. So then I knew what was happening.”

Word quickly spread that Harry and Meghan were heading to the ‘hood’ and the crowd swelled to thousands. Banker Morag Clayton, from Eltham, reserved a spot for daughter Alice, 18, who ran part of the way from her school muck-up day dressed in a dinosaur suit.

“We really do love all the young royals,” said Alice, who called Meghan “an inspiring woman. She’s done so much already for herself, for diversity”.

Alice, along with everyone, was thrilled when the royals pulled up. But the cheering throng was ignored as Harry and Meghan viewed street art then disappeared into the restaurant without a backward glance.

“I ran here to see them. I don’t think we even got much of a wave from Harry, only from Meghan.”

Nobody left. There was communal angst and debate. Was there time for a toilet or food break? Surely Harry and Meghan would say hello after their lunch of wild boar, saffron risotto and barramundi?

Nup. A giant black van moved in front of the crowd, blocking the view. Two hours later, the royals got in their car and left for South Melbourne beach, after the briefest crowd acknowledgement.

What a dud. By then, the mission was a grim one. Harry handshake or bust. Off to the beach, where the royals were already on the sand. There was a brief glimpse of red hair behind countless backs of heads and held-up phones, then another fast exit in the Holden.

Lesson learned. Next royal tour, plan ahead. Or just look at the professional photos. The verdict, from a longtime royals fan: not nearly enough bang for our taxpayer buck.

Two hours next to a dinosaur and no wave: A normal person’s royal day chasing Meghan and Harry