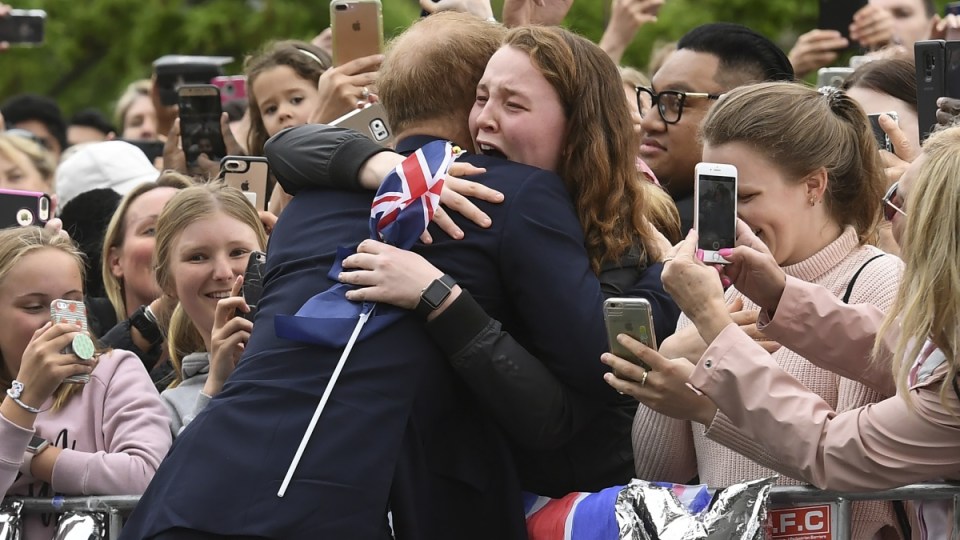 An emotional India Brown gets a special moment with Prince Harry. Photo: AAP

The Duke and Duchess of Sussex shook off a delayed flight and a clogged freeway to wow thousands of people on their one-day stop in Melbourne.

By the time Prince Harry and Meghan Markle arrived at Melbourne’s Government House on Thursday morning, many had been waiting for them for several hours.

But the young royals did not disappoint when they arrived – splitting up to meet the crowd and spending half an hour walking up Government Drive.

Among the throng of Royal watchers was 18-year-old India Brown, who was singled out for special attention from the prince after he saw her sign emblazoned with “Been here since 4am, loved you since I was 8”.

“I have loved that family since I was eight and followed them around the world, and it was such an opportunity and I went for it.

“I didn’t expect it to happen because it against protocol.”

At times, the crowd broke into chants of “C’mon Harry C’mon, C’mon” and screams when the pair showed affection towards each other.

The couple were inundated with gifts from well-wishers, including many presents for the baby due in 2019. They also stopped to engage with many of the young families in the crowd, including five-and-half-month-old Harriet Bonaddio and her mum Jessica.

The royals were then greeted by Victorian Governor Linda Dessau ahead of a reception to meet 350 young Victorians behind several innovative and entrepreneurial endeavours.

Afterwards, they joined 150 women playing football, netball, cricket and other sports on the lawns of Government House as part of the This Girl Can program. The Duchess was persuaded – despite her designer kit and stilettos – to join in with a handball.

Then it was off to social enterprise cafe Charcoal Lane in Fitzroy, for a tour of the kitchen and a late lunch with Australian flavours.

The menu featured an entree of mushroom and quinoa nest and chargrilled kangaroo, and a main course of wild boar, saffron risotto and barramundi.

By that stage of the day, however, the tight schedule and the delayed start was putting pressure on the Sussexes and their entourage. A crowd of hundreds lined the street outside Charcoal Lane, where the couple had been due to arrive just before 1pm and stay for an hour.

They didn’t arrive until 2.40pm, meaning there was no chance of a second walkabout. The rush left many royal followers frustrated at the snub.

“Rubbish,” one woman told News Corp. “I thought they would stop and talk to some people.”

Another said she waited two hours and only saw them from across the road for half a second.

“It was disappointing,” she said.

The royal couple’s day was to finish with a short ride on the world’s largest urban tram network, a visit to Albert Park Primary School and to South Melbourne Beach. Harry and Meghan were to return to Sydney on Thursday night for another full day of engagements on Friday – including climbing the harbour bridge.