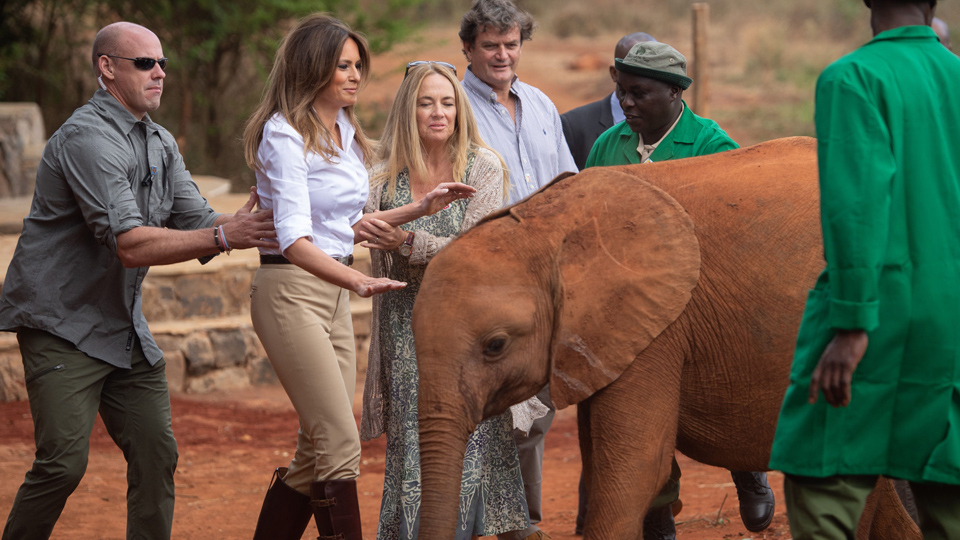 A secret service agent steadies Melania Trump after an elephant bumped her in Nairobi on October 5. Photo: Getty

Melania Trump’s spokeswoman has publicly fired back at rapper T.l. for his most recent music video, which features a First Lady lookalike dancing naked in a room that looks like the Oval Office.

“Like it or not, she is the First Lady and this is the White House,” Stephanie Grisham, Melania’s communications director, said in a statement to CNN and other media outlets.

“It’s disrespectful and disgusting to portray her this way simply because of politics.

“These kinds of vulgar attacks only further the divisiveness and bias in our country. It needs to stop.”

Last week, during her solo trip to Africa, Mrs Trump told ABC News, “I could say I’m the most bullied person in the world. One of them, if you really see what people are saying about me.”

Ms Grisham had earlier attacked the rapper, 38, on her official Twitter account on Saturday, tagging him in a comment about the Melania doppelgänger clip: “How is this acceptable?”

She also called for a boycott on T.I.

Released last Friday but only attracting White House ire on Tuesday (US time), the controversial video shows T.I. – real name Clifford Harris – starring as himself on a set that looks like the Oval Office.

The video shows footage of President Donald Trump, 72, leaving the White House in chopper Marine One. Straight after, a woman enters the President’s fake office, wearing a parka emblazoned with ‘I really don’t care do u?’.

Mrs Trump wore the same much-derided and debated Zara jacket during a trip in June to Texas to meet migrant children separated from their parents at the US-Mexican border.

In the video, the Melania lookalike then strips off the parka and gyrates naked on the desk, stroking T.I.’s tie.

The pair then leave together and are shown spray-painting over Mr Trump’s portrait.

When T.I. – an outspoken critic of Mr Trump – posted the minute-long video to his social media accounts, he captioned it, “Dear 45, I ain’t Kanye”.

The mocking reference was to fellow rapper Kanye West, 41. At a bizarre face-to-face last week with the commander-in-chief, West elaborated at some length on his support for Mr Trump.

He showed at 1600 Pennsylvania Avenue with more than words: He was toting at least six boxes containing pairs of Yeezys, the athletic shoes he created for Adidas, according to The Washington Post.

The President appears to have something of an open door for the West family after welcoming Kanye’s wife Kim Kardashian West, 37, to the White House in September.

The storm over the demeaning rap video came a day after the Trumps were caught in an actual downpour, and Mr Trump was caught on camera hogging an umbrella while his wife was left in the rain.

The couple had left the White House to visit hurricane-torn Florida and Georgia, and Mr Trump nipped off to praise Melania’s ABC News interview.

His move left him holding the umbrella, and Mrs Trump without shelter. The one thing Mr Trump did cover her with was praise. “She did a great job on television the other night,” he said.

He then talked up his own performance on 60 Minutes: “And I didn’t do so bad either.”