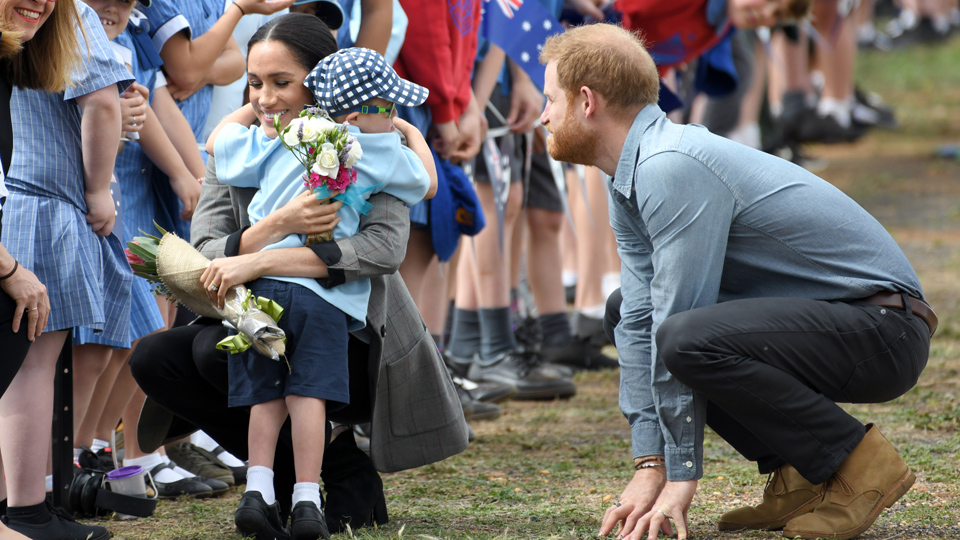 Schoolboy Luke Vincent, 5, hugs the Duchess of Sussex in Dubbo on October 17 as Prince Harry is amused. Photo: Getty

As if their itinerary wasn’t enough of a damp squib – with its overload of activities non-royals would do only if hosting an exchange student – Prince Harry and Meghan Markle literally had a washout in Dubbo on Wednesday.

The duke, 34, took to a podium at Victoria Park to speak to a poncho-clad crowd as the heavens opened after what the NSW Bureau of Meteorology called a “severe thunderstorm warning”.

The largest storm was “north-west of Dubbo” at the same time as the community event, said the BoM.

The irony? The Sussexes were in the NSW township – one of the state’s driest areas – to discuss the drought with locals.

Severe #Thunderstorm Warning issued for #heavy #rainfall for the northern ranges and central west slopes. The largest storm is currently located just northwest of #Dubbo. Keep up to date at https://t.co/Ss766eSCrL pic.twitter.com/GGoxrp2yqc

With rain pelting down and soaking Harry’s shirt, Meghan herself held an open umbrella above them as he spoke. The pair looked almost obscured by the inclement conditions in TV footage of the event.

It was all too much for Chris Ship, an ITV royals reporter who is part of the British media contingent for the 16-day tour. He abandoned his post and fled the scene to seek shelter in a Seven Network van.

I’m in @Channel7 watching the most appalling rain in #dubbo. It’s worse than the UK there ☔️ #RoyalVisitAustralia pic.twitter.com/8QiaNTuvtH

Harry was made of sterner stuff, sticking to his prepared script about the drought and the mental and emotional impact it is having on farming families.

In what was essentially a half-time speech, the prince poured it on, calling Australians “honest, hardworking and as tough as they come”.

He told the cheering rural throng their “resilience, sense of humour and commitment to the land” make them “unique”, and – in a Baz Luhrmann-esque flourish – said the “rich traditions” of the outback are “legendary.”

Assured Harry, “You are the backbone of this country.”

The royal couple – who are expecting their first baby – held hands as they looked at the event’s stalls, which included Buy a Bale, Drought Angels, Headspace and the Country Women’s Association.

Earlier in the day, the Sussexes headed to Mountain View, a property that has been affected by the drought.

Meghan, according to reports, brought a plate: A loaf of banana bread she had personally baked the night before in the kitchen of Admiralty House in Kirribilli.

A Twitter post from Rebecca English of Britain’s Daily Mail showed the duchess’ alleged loaf nestled with sandwiches and slices on a picnic table.

Now in her second trimester, the duchess made a beeline at the farm morning tea for Ruby Carroll, 13 months.

“She told us Ruby is very cute and said she is doing really well with her pregnancy,” said mother Emily Carroll.

The glamorously casual royals also fitted in a visit to the Royal Flying Doctors’ Service, where they heard emotional stories from people whose lives have been saved by the service and unveiled the fleet’s new plane.

“I didn’t even think about curtseying,” said Melissa Storer, whose daughter Keiley, three – a former RFDS patient – handed over a posy of gerberas and daisies to Meghan.

When the duchess pulled a white flower from the bunch and returned it, Keiley was devastated, according to AAP: “Oh no, my posy.”

She wasn’t the only kid to steal the royals’ thunder in Dubbo.

When Meghan and Harry’s light plane flight from Sydney landed, children armed with Australian flags jumped up and down. Among them was Luke Vincent, 5.

Luke greeted Harry by stroking his beard and gave Meghan an impromptu hug, his photo then flashed around the world by agencies.

It was reported little Luke thought the bearded prince was Santa.