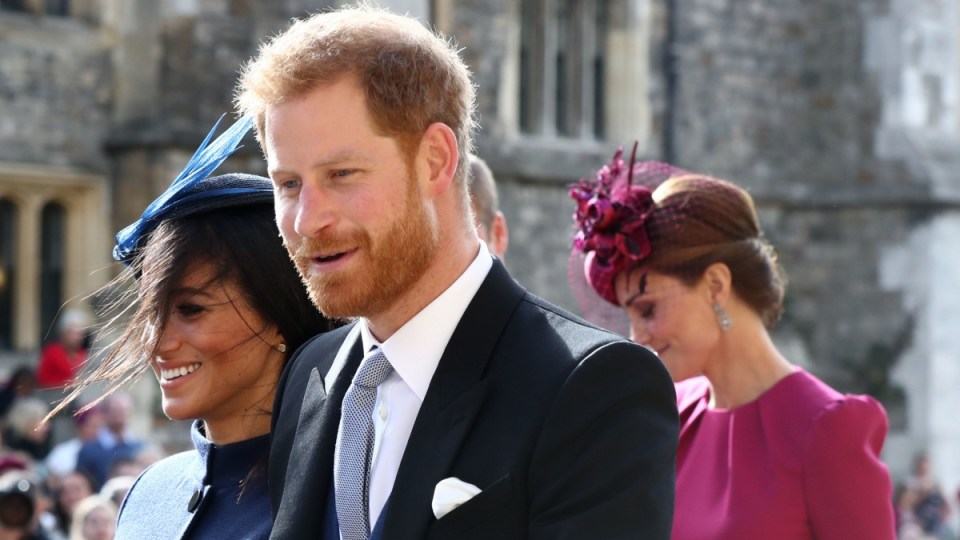 Oh baby! The Duke and Duchess of Sussex with Kate Middleton at Windsor Castle on October 12. Photo: Getty

Waking at Admiralty House in Kirribilli on Tuesday for the first day of her royal tour of Australia with husband Prince Harry, Meghan Markle will know the announcement of her baby news will dominate headlines no matter how cute the koalas she cuddles.

The Duchess of Sussex, who married into the royal family five months ago, is expecting her first baby, Kensington Palace announced hours after Harry and Meghan touched down in Sydney on Monday.

The palace confirmed pregnancy rumours that have created headlines since September 24, when Meghan wore a peplum top to play netball then chose a succession of black outfits and non-fitted coats for royal duties and Princess Eugenie’s October 12 wedding.

The baby, who will be seventh in line to the throne, is due in the northern spring of 2019.

“Their Royal Highnesses have appreciated all of the support they have received from people around the world since their wedding in May and are delighted to be able to share this happy news with the public,” the palace tweeted.

The Queen, Prince Charles, and Harry’s brother Prince William and his wife Kate Middleton are “delighted” for the couple, Kensington Palace said.

A royals source told People magazine that Meghan, 37, is “feeling well” and has had her 12-week ultrasound.

The loved-up couple’s whirlwind baby news is in keeping with their relationship. They started dating in July 2016 after a blind date and went public three months later.

They were engaged in November 2017 and married six months later.

Meghan’s mother Doria Ragland issued a statement through Kensington Palace: “Ms Ragland is very happy about this lovely news and she looks forward to welcoming her first grandchild.”

On the couple’s arrival in Sydney, pregnancy speculation was rife on social media after the duchess emerged from the long-haul flight from London covering her stomach with purple folders.

Before the couple arrived, the exclusion of Meghan from Harry’s upcoming Sydney Harbour Bridge climbing expedition did nothing to quell baby speculation, given the duchess is an exercise junkie who loves running, hiking and yoga.

The timing of the announcement when the couple is away from home is possibly down to the Sussexes not wanting to steal Princess Eugenie’s pre-wedding thunder.

Senior members of the royal family who mingled with Harry, 34, and Meghan at Eugenie’s Windsor Castle wedding congratulated the couple in person, according to reports.

Fans of the couple reacted quickly on social media, saying “That coatdress [at Eugenie’s wedding] was a dead giveaway” and “Well, that didn’t take him long”.

Harry and Meghan have spoken openly about wanting junior Sussexes.

When asked in their post-engagement interview with the BBC, the prince said “of course” when asked about baby plans.

“You know, one step at a time. Hopefully we’ll start a family in the near future.”

In March, on a royal outing, they met a husband-and-wife team who make hypoallergenic baby products, according to People.

Said Meghan, pointing to the product range, “I’m sure at some point we’ll need the whole thing.”

The expectant couple will kick off their 16-day tour on Tuesday with a welcome from Governor-General Sir Peter Cosgrove and a visit to Taronga Zoo and the Sydney Opera House.