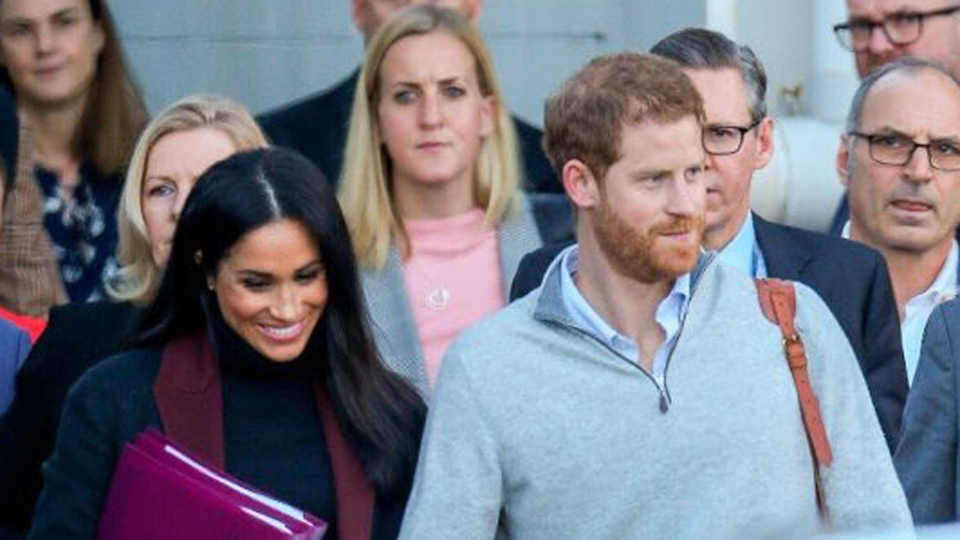 The Duke and Duchess of Sussex at Sydney airport on October 15 after their flight from London. Photo: Twitter

The Duke and Duchess of Sussex’s royal tour of Australia kicked off on Monday morning with a plane farce, a hard rubbish PR disaster and conspiracy theories involving stationery.

The blanket television coverage of Meghan and Harry’s arrival at Sydney airport saw commercial news crews train cameras on a British Airways plane as it landed about 6am.

The plane was then shown sitting on the tarmac for nearly half an hour as TV breakfast news hosts gamely tried to pad while waiting for something real to happen.

Networks replayed the plane landing again and again, until it was realised the royals had arrived on a Qantas A380 about 7am, reportedly from Singapore.

Even British tabloids were fooled.

Qantas declined to comment to media, but sources told The Sydney Morning Herald that Harry and Meghan were in good spirits during the journey, and were “excited about coming to Australia”.

It is believed the pair flew in one of the A380’s 14 first-class suites.

Meghan and Harry eventually emerged from the airport via a VIP back door about 7.40am, in a brief appearance before they were hustled off in a police motorcade.

The prince, 34, who has been a regular visitor to Australia since his 2003 gap year here, didn’t stand on ceremony. He dumped his shoulder bag into the boot of a white Holden sedan and slammed it shut himself.

#BREAKING: We've received our first sighting of the Duke and Duchess of Sussex in Sydney! Welcome to Australia Prince Harry and Meghan Markle! #9Today pic.twitter.com/t8TKmqSmgQ

Meghan, who flashed a smile at media before ducking into the official car, was in her new favourite head-to-toe black: polo neck, coat with burgundy lapels and skinny pants.

But it was her most prominent accessory – a couple of big purple plastic folders – and not her casual travel wardrobe that sparked comment.

Larry Emdur, co-host of Seven’s The Morning Show, posted a question to Instagram about why the duchess would be carrying the chunky stationery items for her first-ever appearance on Australian soil, instead of handing them off to a flunkey.

“I don’t want to start any trouble but can someone give me one, just one, reason Meghan would even carry a folder, let alone carry it like that?” asked Emdur.

I don’t want to start any trouble but can someone give me one, just one, reason Meghan would even carry a folder let alone carry it like that ? #askingfortherestoftheworld #welcometoaustralia #ourfavouriteroyalsever

Social media users jumped on the bandwagon, asking if the TV host was repeating rumours – fuelled by the wearing of coats and peplum tops – that the duchess, 37, is pregnant five months after her wedding.

Rebecca Gibney, star of Seven drama Wanted, was blunt: “Preggers”, she wrote, with an emoji of an expectant mother.

Others were more circumspect. “She thinks she’s still on the set of Suits going to court,” wrote one. Others speculated Meghan was boning up on the flight on Australian customs and people she’ll be meeting.

The folders were big enough news for People magazine to note about Meghan that “the 20-plus-hour plane ride from London would have provided her plenty of time to brush up on the tasks ahead.”

Thanks to their motorcade clearing roads, the royal pair dodged all rush hour traffic en route to Kirribilli, where they were greeted by a small crowd and hard rubbish dumped on nature strips for a council collection.

Streets littered with household junk greet Harry and Meghan as they arrive in Sydney https://t.co/Q2CvcVt1Zc pic.twitter.com/Kt4SkmW3xD

The duke and duchess have an entourage of 10: Private secretaries Samantha Cohen and Amy Pickerill, three communications staffers, a program co-ordinator, a digital journalist, an orderly, a hairdresser and a personal assistant.

Meghan, it has been noted, is travelling without a makeup artist.

The royals are expected to mooch about Admiralty House for the day, resting after their trip before their first full day of engagements on Tuesday.

They will be officially welcomed by Governor-General Sir Peter Cosgrove before visiting Taronga Zoo and the Sydney Opera House.

They have 76 engagements across 16 days in Australia, Fiji, Tonga and New Zealand. The tour coincides with Harry’s passion project, the Invictus Games, which run in Sydney from October 20-27.

A plane farce and stationery conspiracy: Welcome to Australia, Harry and Meghan