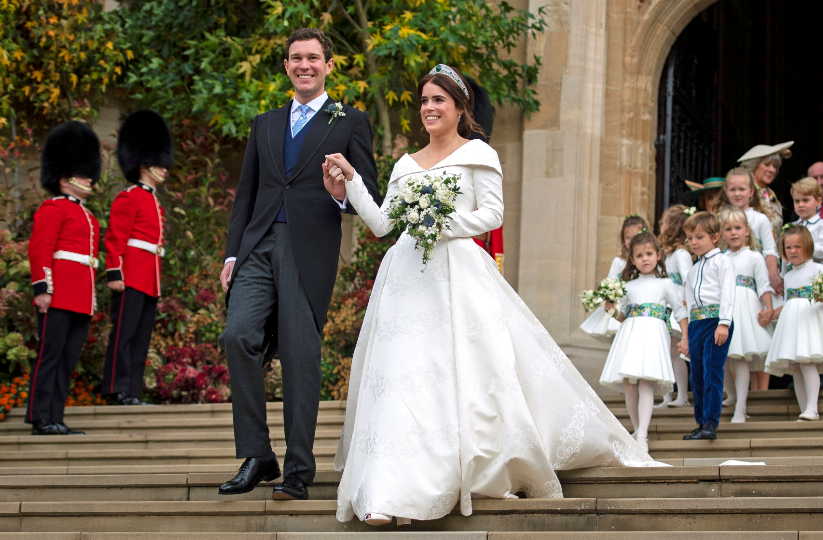 Despite confessing that nerves were “creeping up” in the days ahead of her wedding, Princess Eugenie serenely smiled – despite high winds and tripping on her own dress with her satin Charlotte Olympia heels – as she made her way into St Georges Chapel just after 11 am on October 12.

Escorted by her father, Prince Andrew, Eugenie, 28, wore a gown by British-based label Peter Pilotto, featuring a folded neckline that draped into a full-length flowing train.

According to the Palace, the back-baring design was at the specific request of the bride, who had surgery at the age of 12 to correct scoliosis.

At the altar, Casamigos Tequila brand ambassador Jack Brooksbank sucked in deep breaths as he stood next to brother Thomas.

As his bride approached (her “something borrowed” the Greville Emerald Kokoshnik Tiara, lent to her by the Queen) Brooksbank, 32, removed his glasses and blinked back tears.

Looking on, mother-of-the-bride Sarah Ferguson (who a source told People had been “very involved” in the wedding plans) was animated, waving to pals as she took her place in the front row between ex-husband Prince Andrew and oldest daughter, maid-of-honour Beatrice (in Ralph & Russo).

The trio sat in front of Queen Elizabeth, Prince Philip and Prince Charles (minus Camilla, Duchess of Cornwall, who was unable to attend due to what were politely described as “official duties”).

Prince William and Kate Middleton (in Alexander McQueen) held hands behind them while Prince Harry and a Givenchy-clad Meghan chatted with Princess Anne.

The event marks a new age of acceptance for the Duchess of York (who wore a dress by local Windsor company Emma Louise Design) after she was left off the guest list for William and Kate’s wedding in 2011 and then snubbed from Harry and Meghan’s second reception in May.

Aside from 30 members of the royal family, among the 850 guests packed into the chapel were a slew of celebrities: Kate Moss, Demi Moore, Liv Tyler, Naomi Campbell and Cara Delevingne.

Ricky Martin, Ellie Goulding and Robbie Williams, whose daughter Theodora, 6, led a posse of pageboys and flower girls that included five-year-old Prince George (at one point was busted picking his nose) and Princess Charlotte, 3, into the chapel at the start of the ceremony.

Still, all eyes were on the happy couple as they snuck side glances and loving looks at each other throughout the proceedings, then shared a laugh as Brooksbank struggled to slide on Eugenie’s wedding ring.

During a reading taken from St. Paul’s Letter to the Colossians by Jack’s cousin Charles Brooksbank, the pair seemed to be in their own world as they inspected each other’s new wedding bands.

A reading from The Great Gatsby by F. Scott Fitzgerald by maid of honour Beatrice, 30, shed more light on the couple’s bond. The passage describes the title character, Jay Gatsby and his smile:

“It was one of those rare smiles with a quality of eternal reassurance in it,” she read. “It understood you just as far as you wanted to be understood, believed in you as you would like to believe in yourself.”

The quotation mirrors Eugenie’s own sentiments about her partner of almost eight years: “Jack’s the kind of guy, you know when you’re lost at a party, and you can’t find anyone to talk to, and you start panicking, and you need help?” Eugenie said during her pre-wedding interview with UK’s ITV.

“He’ll scoop you up and talk to you and make you feel a million dollars.”

As they exited St Georges, down steps adorned with seasonal foliage and flowering branches sourced locally from Windsor Great Park, Eugenie and Jack shared their first kiss as a married couple before climbing into a horse-drawn coach for a trip through Windsor High Street, cheered all the way by thousands of well-wishers.

The newlyweds were feted by a lunch hosted by Queen Elizabeth at Windsor Castle, featuring a five-tier red velvet and chocolate wedding cake, followed by a black-tie evening reception at Royal Lodge.

The party is set to continue on Saturday afternoon with a festival-style event complete with a fairground and food stalls.

“I’ve not been kept out of all the planning. I get to decide some things,” Brooksbank said. “I’m in charge of drinks, and we’ll be serving Casamigos.”