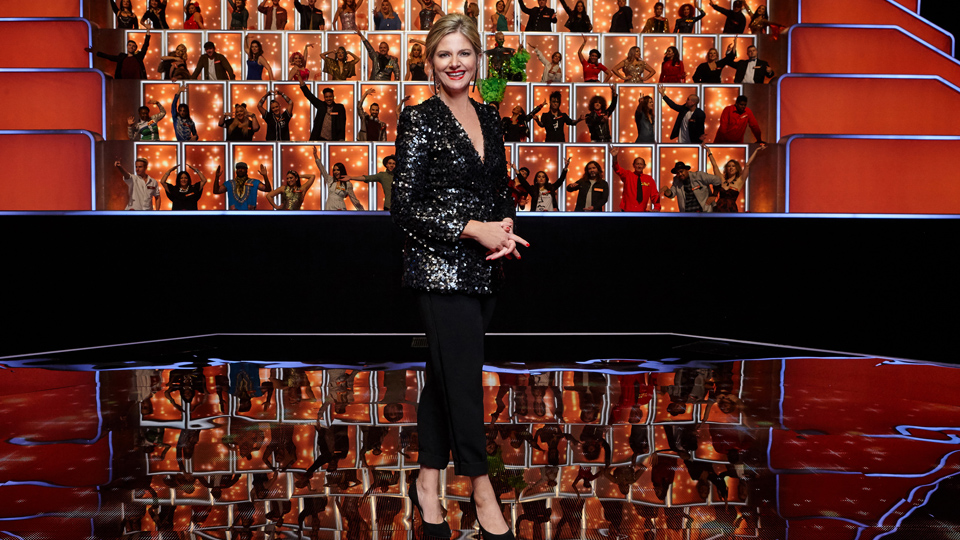 "I was up for a challenge," said Julia Zemiro of signing up for Seven's All Together Now. Photo: Seven Network

“I’m an ABC, SBS girl,” says the French-born performer over coffee and a toasted sandwich in Sydney.

“When this came up, and my agent said ‘It’s a singing show’, I thought, ‘Oh no, that’s not gonna happen. Do we need another singing show?’”

Watching the original UK version— featuring contestants scoring points by getting 100 judges with musical backgrounds standing and singing along— changed her mind.

“We need a world where we sing together more as opposed to individuals just plugged into their own devices,” Zemiro said.

Besides, “I know my skill is interacting with people and bouncing off others and instead of having the six people I have at RockWiz or the one person I have on [ABC interview show] Home Delivery, I’d have 100 people.

“I was up for a challenge.”

Zemiro, 51, reckons her discernment has defined her lasting career. “I’ve said no to lots of things. You’ve got to,” she told The New Daily.

“You don’t want to get well-known for things that are shit. Some things would make me so embarrassed to be a part of. I often think, ‘How would I explain this decision to people I respect?”

Early in her performing career, Zemiro made a deal with herself. “I said, ‘If by 40 we haven’t got something that’s paying the bills, we should do something else, shouldn’t we?” she said, laughing.

As a graduate of the Victorian College of Arts Drama School, she had worked steadily— touring with the Bell Shakespeare Company followed by turns on Totally Full Frontal, Good News Week and a number of movie roles— but hosting the SBS music trivia show “showed my personality and my quick wit and my ability to be nice to people,” she said.

“That opened the Eurovision door, it opened a radio door, corporate work— everything. That show is why I’m doing All Together Now.”

While she credits RockWiz for her professional chops, she concedes the gig may have also altered the path of her personal life.

“That’s definitely a ‘sliding doors’ moment,” said Zemiro, noting she was “a bit of a workaholic” before meeting her partner, Danish businessman Carsten Prien, on a plane five years ago.

“If I hadn’t got RockWiz, who knows? I might have had children, and I’m a bit sad about that, but that’s how things panned out.”

These days there’s more balance. Her downtime means “no shoes, no makeup, bike riding and cooking” in the NSW Southern Highlands with Prien, who works in the building industry.

Marriage, however, isn’t on the cards. “I find it a little odd in front of so many people saying how you feel about someone. That does make me feel a little uncomfortable,” she said.

“He knows how I feel about him. I know how he feels about me.”

Still, “that’s not to say that someday when we’re 65, and we’re somewhere interesting, and there’s a beach … it’ll be a barefoot situation, in some kind of sundress I should imagine. By the water.”

Looking back, there are no regrets. “Those sliding door moments are great to think about, but you really don’t know the alternative,” Zemiro mused.

“But you can control things to a degree by saying no.”

A bonus? With a six-storey set to climb, “running up and down I’d switch into a cheeky sand shoe, and I felt so free and comfortable,” she said. “My energy levels went through the roof— and I got fitter by the week!”

Best car sing-along song: “Josh Pyke, Middle of the Hill and Private Education. You can harmonise. The words are difficult. Its like you’re singing the Beatles but you’re not.”

Most melancholy song: “Bonnie Raitt’s version of I Can’t Make You Love Me. When she says ‘Turn down the light’,  you can see her walking through that room and going to lie down next to someone – and we’ve all experienced it – you know it’s over. It’s not even melancholy, that’s just full on crying.”

Best party banger: “I’m quite fond of Walk This Way by Aerosmith and Run DMC. I’m a bit of a ‘head dancer’. I went to my stepson’s Year 11 ball and I have not danced like that in an age. The next day I could not move my neck.”

Most romantic song: “It’s from Eurovision. L’essenziale by Marco Mengoni.  I can’t speak Italian fluently at all, but I did learn all the words and I would sing it and we would dance to it. It’s our song, but no one will know it.”

Julia Zemiro on life, love and her favourite songs