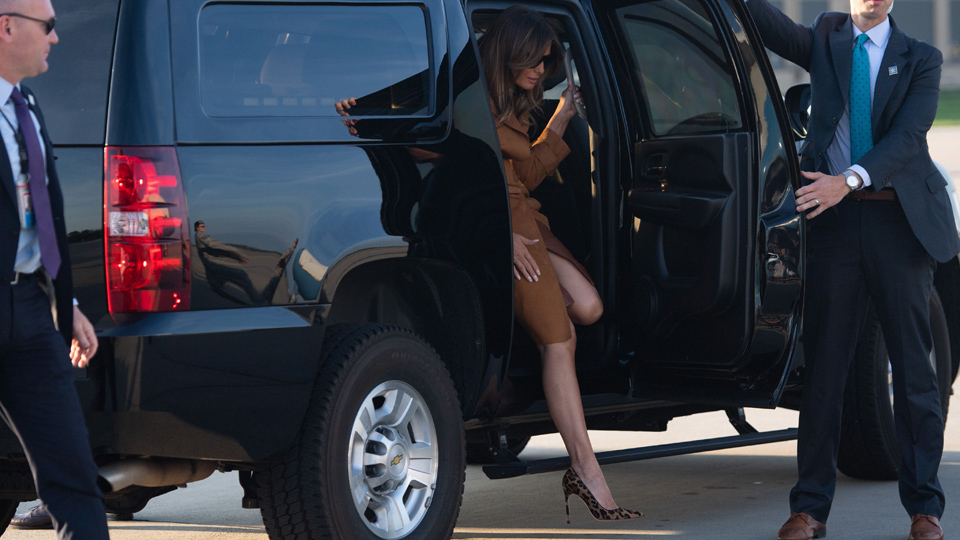 Melania Trump makes a Maryland air force tarmac a fashion runway as she leaves for Africa on October 1. Photo: Getty

Stepping onto her plane Executive One at an air force base in Maryland on Monday (US time), Melania Trump kicked off her first major solo trip as US first lady with one of her famous literal fashion statements.

Mrs Trump, displaying a sense of humour as much as a sense of style, wore towering leopard print heels with a tan trench and great blowout as she flew off, bound for Africa.

Striking a note of independence from the get go, FLOTUS avoided tarmac goodbyes and was unaccompanied by her husband, President Donald Trump, and their son Barron, 12, who are staying in Washington.

But Mrs Trump, 48, farewelled Americans with a personalised gift.

In an exuberant tweet, Melania used seven hashtags to convey her excitement about African sojourn. She accompanied it with a special PR video showing her doing good deeds for her ‘Be Best’ platform.

Sleeves of her white shirts rolled up, she stalks onto podiums, does problem-solving, nods sagely on panels and plays teacher, all while gentle background piano music is playing.

We are taking off for #Africa! So looking forward to visiting #Ghana #Malawi #Kenya & #Egypt as I take #BeBest international. #FLOTUSinAfrica2018 pic.twitter.com/8P7r0evXcU

In a speech in New York City last week, Mrs Trump said promoting ‘Be Best’ is a major reason for her African trip. She’s scheduled to visit schools and hospitals over six days, although her exact schedule is still under wraps for security reasons.

The itinerary, according to reports, was chosen so Mrs Trump could mix business with sightseeing. In Egypt, for example, she will probably visit the country’s most famous tourist site, the Great Pyramids.

Planning for the trip began last year and Mrs Trump worked with the Secret Service to pick countries that ticked security boxes and offered tourism options.

The first lady on safari is an option, according to reports, and the schedule might mean she abandons her signature Louboutin heels for chic flats once it’s wheels down.

“Morocco was considered, but abandoned in the end because Mrs. Trump was wary that the entrance for her that was being talked about might strike some as too grand and ceremonious,” according to The New York Times.

It gave no further details of what the mode of entrance might be, but what is known is that once she lands in Ghana’s capital Accra, Mrs Trump isn’t planning on acclimatising for long.

“She had a vision in mind of what she wanted to see and wants to hit the ground running,” her White House communications director Stephanie Grisham said.

The question has been asked whether the PR skills shown in Mrs Trump’s video will be put to use in terms of trying to massage the image of her husband’s administration in Africa.

Last week Mr Trump ejected globalism at the United Nations. In January, CNN claimed that while speaking behind closed doors about illegal immigration, the President dismissed “s–thole countries”, with an implication toward Africa.

But Ms Grisham hosed down the suggestion that Mrs Trump was a goodwill envoy for the President.

“She is interested in Africa because she has never been before and knows that each country will have its own unique history and culture,” Ms Grisham said.

Kate Anderson Brower, author of a book on first ladies, told The New York Times it’s “therapeutic” for presidents’ wives to leave Washington as often as they can.

“I am very curious to see if Melania’s trip will be effective,” she said.

“This White House is in desperate need of another story line.”