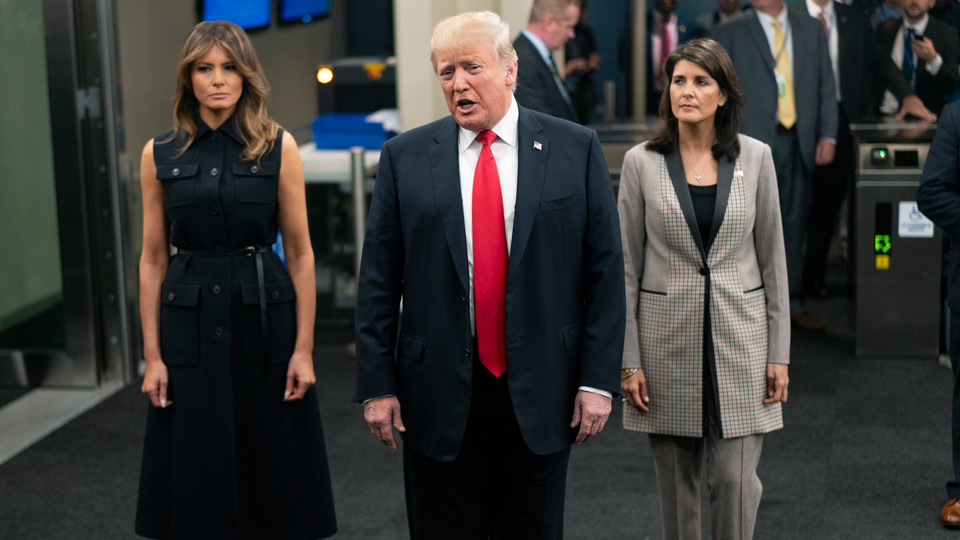 Melania and Donald Trump with Nikki Haley at the United Nations General Assembly in New York on September 25. Photo: AAP

Walking into the United Nations General Assembly in New York on September 25 with her husband, US President Donald Trump, Melania Trump was chic in a black Dior shirtdress with matching signature heels.

And that expensive, appropriate wardrobe choice was enough to spark the latest literal dressing theory about Mrs Trump.

As first reported by US news and entertainment site AOL and followed by other outlets including Harpers Bazaar,  the pared-back dress convinced some commentators that it was a crack at Mr Trump’s negative stance on the ‘MeToo’ movement.

The president took to Twitter on September 21 to vigorously defend Supreme Court nominee Brett Kavanaugh, who has been accused of assault by three women.

Which is where the tailored Dior comes in. Black, a colour Mrs Trump has saved in the past for visits to the Vatican or similar sober occasions, is aligned with ‘MeToo’.

At the Golden Globes in January, the red carpet was a sea of black after Hollywood stars were asked to wear it as a symbol of solidarity with sexual harassment and assault victims.

But the question is, was Melania just wearing a conservative, classic dress because it was appropriate for the occasion, or was she sending a message?

Twitter weighed in, with users commenting on everything from FLOTUS’s style to her accent, social conscience and marriage:

Melania Trump could become an American hero within seconds by uttering just 4 words:

"I believe these women"

How do you want to be remember, @FLOTUS?

Certainly in the past, her wardrobe choices have been statement-making and even subversive, from the pussy-bow blouse, white pantsuit and infamous controversial Zara slogan jacket.

But this time, it seemed a long bow, not least because at the UN, Mrs Trump was openly supportive of her husband.

When President Trump was met with laughter when he told the UN General Assembly that “in less than two years, my administration has accomplished more than almost any administration in the history of our country,” his wife didn’t see the joke.

She fought his corner in an unusual public display of solidarity.

As she was leaving the building, Melania was what she thought of the speech. Smiling at reporters, she said, “Fantastic.”

.@FLOTUS Melania Trump calls President @realDonaldTrump's speech "fantastic" on her way out of the U.N. pic.twitter.com/YPbDguL4AS

Whatever the truth about her black dress, Mrs Trump was clearly on message on Wednesday (US time) when she announced details of her tour next week to Africa.

The trip is Melania’s first extended solo overseas foray. At a reception for spouses of foreign leaders and others taking part in the UN General Assembly, she made brief remarks on her plans to emphasise child welfare in Ghana, Malawi, Kenya and Egypt.

“October 1 will mark the first day of my solo visit to four beautiful and very different countries in Africa,” Mrs. Trump told dozens of guests.

“Each of us hails from a country with its own unique challenges, but I know in my heart we are united by our commitment to raising the next generation to be happy, healthy and morally responsible adults.”

Thank you to all who attended my #UNGA reception today! Looking forward to working with @USAID to take my campaign #BeBest to Africa next week. Together, we can do great things on behalf of the next generation. pic.twitter.com/OG99wwP5Aj