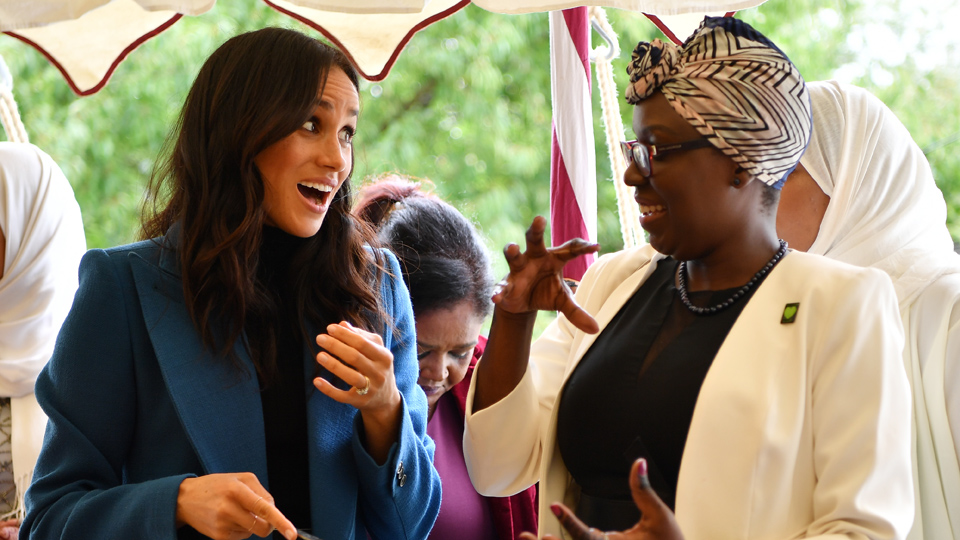 The Duchess of Sussex cooks lunch at her Kensington Palace cookbook launch on September 20. Photo: Getty

The Duke and Duchess of Sussex have clearly designated day jobs – to be British royals – but on Meghan’s first solo outing they both had a crack at other occupations.

First up, posing for a photo with his wife and mother-in-law Doria Ragland at the Kensington Palace launch of the duchess’s community cookbook project, Harry put aside the professional prince thing to turn hairdresser.

When a gust of wind picked up Meghan’s loose hair, the duke, 34, quickly leapt into action.

Standing behind his bride of four months, Harry seemingly instinctively tamped down her hair in a gesture hailed in headlines as “gentlemanly”. The prince also briefly snuggled his chin into Meghan’s shoulder.

Meghan, 37, looked slightly taken aback and said “sorry” to Harry, then turned and beamed at her husband for his hands-on approach to her ruffled hair.

When you just have to flatten down the wife’s hair on a windy day … pic.twitter.com/4E7L3iurB7

It wasn’t Harry’s only display of affection for the day. When greeting one member of the Grenfell community, whose recipes have been turned into the cookbook, he kissed the woman three times in quick succession.

Meghan, meanwhile, also greeted guests with enthusiastic hugs and kisses at the launch of Together: Our Community Cookbook. Even before the book’s release, it was a bestseller on Amazon.

"The power of food is more than just the meal itself — it is the story behind it. And when you get to know the story of the recipe, you get to know the person behind it." — The Duchess of Sussex. If ‘Together’ has inspired you, we’d love to hear about it. Whether it's cooking within your community, sharing food to help others through a time of adversity, or swapping much-loved recipes to bring you closer to your neighbours; share your stories about how food can bring people together using #CookTogether.

Wearing a skirt by her friend Misha Nonoo, Sarah Flint pumps and $2160 Smythe coat, Meghan took off her duchess’ hat and put on her chef’s one.

She expertly flipped chapatis and turned koftas on a barbecue while helping to prepare lunch for the guests.

Given she’s an expert with running lines, it was no surprise the former Suits actress nailed her first public speech since becoming an official part of the Windsor family.

“Working on this project for the past nine months has been a tremendous labour of love,” she told guests.

“I had just recently moved to London and I felt so immediately embraced by the women in the kitchen – your warmth, your kindness, and also to be able to be in this city and to see in this one small room how multicultural it was.”

Ms Ragland, a yoga instructor, flew out from Los Angeles earlier this week to support her only child at the event. Mr Ship claimed she introduced herself to people by saying, “I’m Meg’s mum.”

Reports she is planning to move permanently to London have not been confirmed by the palace, which did however include her in social media posts about the Thursday (British time) event.

🎉 The Duke and Duchess of Sussex and Ms. Doria Ragland are today celebrating the launch of ‘Together: Our Community Cookbook’ with the women of the Hubb Community Kitchen #CookTogether pic.twitter.com/MRGFjNJxM6

As for Harry and Meghan’s continued public affection for each other and others, it’s “atypical” but at their own discretion, a royal etiquette expert said.

“There is no protocol that says they can not show affection on official engagements, and this gesture makes them relatable and lovable to the public,” Myka Meier, founder and director of Beaumont Etiquette, previously told People.