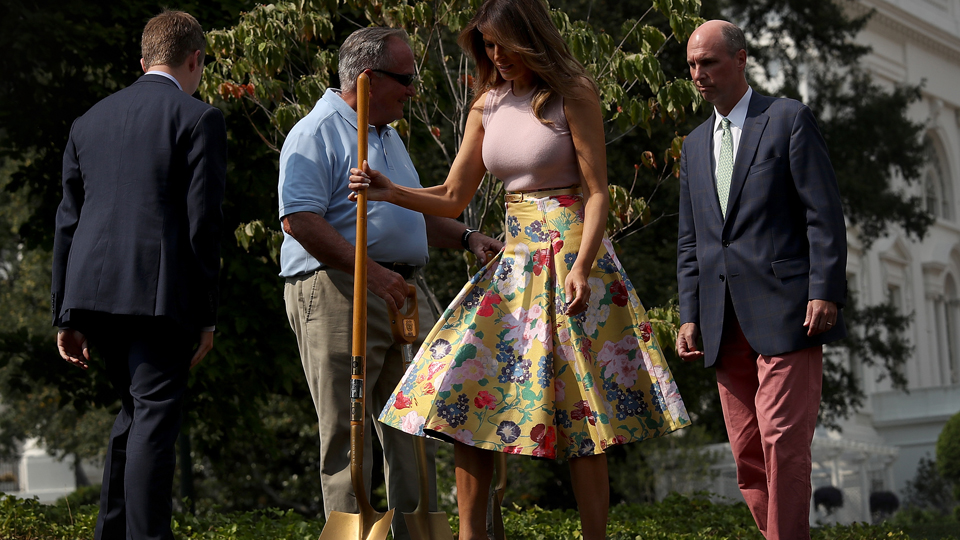 Melania Trump digs a hole for herself at the White House on August 27. Photo: Getty

Call it Melania Trump’s way of offering an olive branch of peace – or more evidence she’s digging metaphysical dirt on her husband.

On Monday, as storm clouds gathered over her husband because of his initial muted reaction to the death of Senator John McCain, Mrs Trump picked her way in pale pink Louboutin heels across the South Lawn of the White House.

Ready for a ceremonial tree planting, Melania, 48, was armed with a gold spade and invisible cloak of diplomacy.

On the surface, her mission was simple: To earth a sapling from the White House’s Eisenhower oak tree to replace one that blew down in March.

What might have been a fusty event “took on a note of tension,” reported The Washington Post, “as the First Lady again assumed the role of edge-smoother in chief.”

Melania as moderator? That was one take on it, and in itself suggested the First Lady is seen as more presidential and placating than the president, which might stick in his provocative craw.

Another was that Mrs Trump was, perhaps, once again very subtly doing what CNN and The Huffington Post last week called “trolling” Mr Trump.

After stepping gingerly through some wood chips, FLOTUS thanked the National Park Service for “doing an amazing job in keeping the White House grounds in beautiful shape”.

So, Melania is a fan of the NPS. Mr Trump isn’t.

I had the honor to contribute to the beautiful and historic @WhiteHouse grounds today by planting a sapling from the Eisenhower Oak. Thank you to @WhiteHouseHistory for organizing the #PresidentialSites and to the previous first family descendants who joined us today.

Tension began between his administration and the NPS on Inauguration Day in January 2017 when the National Park Service retweeted a post that unfavourably compared the crowd size at President Trump’s ceremony with that of Barack Obama’s 2009 inauguration.

The brouhaha kicked off a months-long investigation into whether NPS officials altered estimates of the crowd size. It ended with a finding they did not.

Whatever the truth about the tree planting, there was another indication the same day that Mrs Trump might take a different path to her husband on a matter of national importance.

While the president almost certainly won’t be among mourners at Senator McCain’s funeral after publicly disparaging the late politician, his wife may be.

The White House refused to confirm or deny speculation that Melania will go solo to the funeral at Washington National Cathedral on Saturday.

“We have made no announcements, so any reports you are seeing did not come from our office,” a White House spokesperson told People.

If she did go, it wouldn’t be a first.

In April, while Mr Trump was playing a round of golf, Mrs Trump – beaming at seatmate Mr Obama – was front and centre at the Houston farewell to former first lady Barbara Bush.

Certainly, where her husband’s social media tribute to Mr McCain had a photo of himself and an exclamation mark, Mrs Trump’s was more elegant, less about her.

“Our thoughts, prayers and deepest sympathy to the McCain Family,” she tweeted after Senator McCain died of brain cancer at the age of 81 on Saturday.

“Thank you Senator McCain for your service to the nation.”

Her most extraordinary example was wearing a $39 Zara jacket that read ‘I really don’t care, do u?’ to board a plane in June to visit children at border shelters in Texas. It was hailed as both tone deaf and a visual insult to Mr Trump for his immigration policies.

Four months later, the First Lady sparked international concern when she disappeared in May for nearly a month, without explanation.

Mr Trump, 72, joked that his wife – who also bailed out on him for his Singapore meeting with North Korean leader Kim Jong-un – had supposedly left him but also said she was “doing fine”.