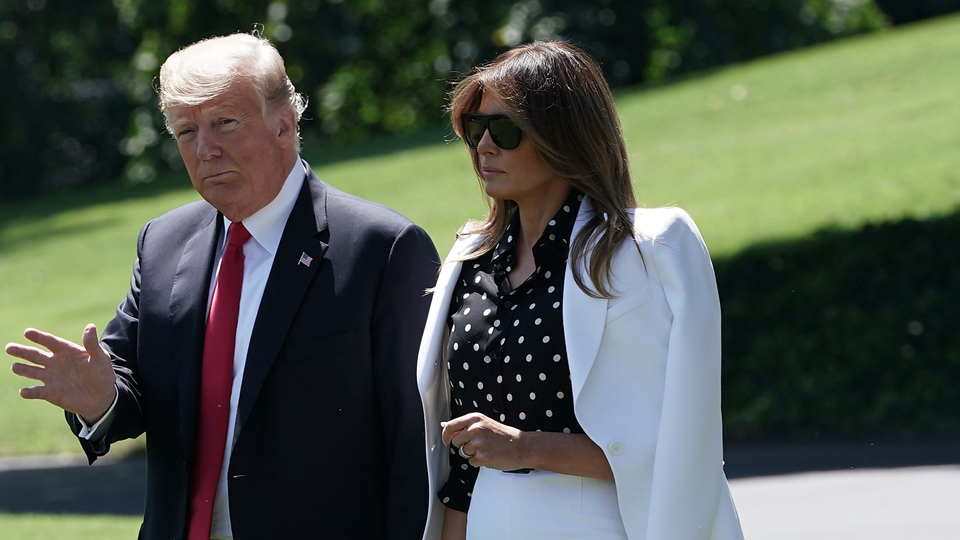 Who says they're not happy? Donald and Melania Trump leave the White House on August 24. Photo: Getty

Since her husband’s inauguration, the former model, 48, has been beset by global rumours that she is miserable with her husband.

The latest came last week, when former White House aide Omarosa Manigault Newman claimed in her new book that Mrs Trump is counting the days until Mr Trump’s term in office ends so she can leave him.

But Ms Daniels, real name Stephanie Clifford, said in an interview with British newspaper The Mirror the buzz is all just “a projection. Some people misplace sorrow and pity on another person”.

The public, she said, “should stop speaking for her. Maybe she’s happy”.

The “entire world”, added Ms Daniels, “would be interested to know what she feels. But if we never know, that is her right and I support it.”

Mr Trump has denied having an affair with Ms Daniels, who was paid $US130,000 ($177,000) hush money by the President’s former personal lawyer Michael Cohen to keep quiet about the alleged relationship. Ms Daniels is suing Mr Trump and Mr Cohen for defamation after they called her a “liar.”

After news of the secret payment and affair allegations broke, Mrs Trump cancelled a trip with the president to the World Economic Forum in Davos, Switzerland.

There was speculation among academics that it was a “subliminal message” to her husband.

Mrs Trump also made global headlines when she wore a Zara jacket emblazoned with ‘I Really Don’t Care, Do You?’ to visit children separated from their families by the Trump administration’s migration policies.

That claim was slammed by Ms Grisham, who said Mrs Trump and Ms Manigualt Newman, who was sacked from her White House job, “rarely, if ever, interacted” in the corridors of power.

Last week, outlets including The Huffington Post, Washington Post and CNN asked whether Mrs Trump was “trolling” her husband with some of her actions, the latest of which was an event she held on Saturday to celebrate the 102nd anniversary of the National Parks Service.

She thanked the service for its “commitment to this country”.

Meanwhile, a video clip of the Trumps getting off Marine One for a children’s hospital visit in Ohio on August 24 created the latest Melania conspiracy theory: that she was replaced by a body double after the real FLOTUS boarded the chopper in Washington.

Posted to Twitter by one user, the video was watched over 2.5 million times in two days and was widely picked up elsewhere.

“Not her. Not her posture, profile, poses. No sir, no way, no how,” said one user. Added another, “Do you think she escaped to Africa already?”

Is that… is that meant to be Melania on the left? pic.twitter.com/v7ih5GVrEG