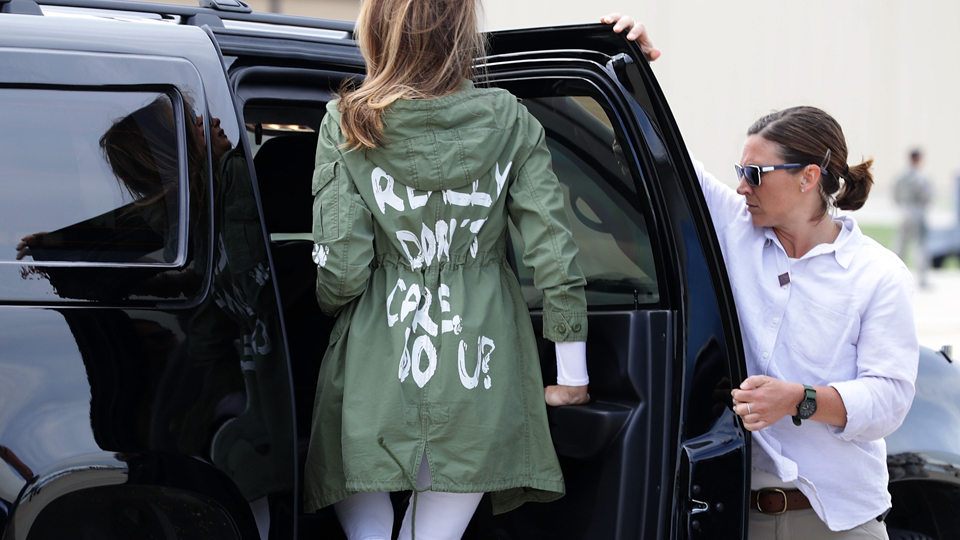 US first lady Melania Trump climbs back into her car in her slogan parka after her Texas visit on June 21. Photo: Getty

Melania Trump’s more controversial style choices – including the pussy-bow blouse she wore to a 2016 debate and her infamous slogan jacket – are designed to toy with her husband, according to a former White House senior aide.

The book – which has already created sensational headlines, including a denied claim that Donald Trump ate a piece of paper – is to be released on Tuesday, US time.

Ms Manigault Newman found fame working with Mr Trump on The Apprentice then served as director of communications for the White House Office of Public Liaison before being fired in December 2017.

“All of [Melania’s] style rebellions have served the same purpose,” she wrote in Unhinged, in an excerpt obtained exclusively obtained by the Daily Mail..

“I believe Melania uses style to punish her husband.”

In the book, she claims the first lady aimed to make the President “look foolish” when she wore a cheap Zara parka emblazoned with “I really don’t care, do you?” to visit children separated from their parents at a Texas immigration centre.

It was slammed as tone deaf by commentators, but the President’s Tweeted claim that his wife was referring to the “fake news media” was refuted by her communications director, Stephanie Grisham.

“It’s a jacket. There was no hidden message,” she said.

“It’s my opinion that Melania was forced to go to the border that day in June, essentially, to mop up her husband’s mess,” Ms Manigault Newman wrote.

Mrs Trump wore the jacket, claimed the fledgling author, to “hurt” her husband over his “zero tolerance” immigration policy.

The resulting attention set off “a controversy that he would have to fix, prolonging the conversation about the administration’s insensitivity,” wrote Ms Manigault Newman.

i want a girl with a short skirt and the wrooooooooooong jacket https://t.co/3Z8ADMtlUf

While the former aide is “sure” Mrs Trump has “compassion” for immigrant children, she claimed FLOTUS “gladly, spitefully, wrecked her husband’s directives to make him look foolish.”

Ms Grisham replied swiftly to the claims by Ms Manigault Newman, who did not present proof of her Melania theories.

“Mrs Trump rarely, if ever, interacted with Omarosa,” said Ms Grisham in a statement to People.

“It’s disappointing to her that she is lashing out and retaliating in such a self-serving way, especially after all the opportunities given to her by the President.”

She questioned Mrs Trump’s choice of a pink Gucci pussy bow blouse immediately after the Access Hollywood scandal involving Mr Trump, and the Hillary Clinton-style white pantsuit she wore to the President’s first State of the Union address.

“I believe Melania uses style to punish her husband,” she wrote.

Meanwhile, another of the claims in Unhinged found Mr Trump and his former lawyer Michael Cohen unexpectedly in the same camp on Monday (US time).

Mr Cohen tweeted that Ms Manigault Newman’s claim that she once saw Mr Trump eat a “sensitive” note from a lawyer in the White House is wrong.

“I saw no such thing and am shocked anyone would take this seriously,” wrote Mr Cohen.

LTo the many dozens of #journalists who called me, questioning @OMAROSA claim in her new book that @POTUS @realDonaldTrump took a note from me, put it in his mouth and ate it…I saw NO such thing and am shocked anyone would take this seriously.

Mr Trump, who is embroiled in a war of “credibility” with Mr Cohen, retweeted the tweet.b