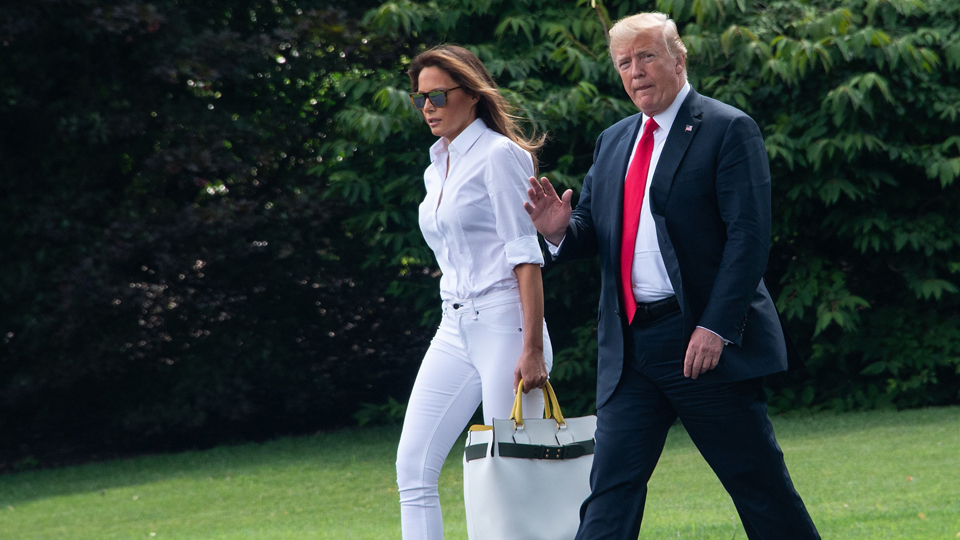 US First Lady Melania Trump and President Donald Trump board Marine One on July 27 for a getaway to New Jersey. Photo: Getty

Melania Trump’s spokeswoman has slammed a politician who called the first lady a “hoebag” who “works by the hour” on Twitter.

“To say such ugly words about a mother, a wife, and our first lady is not just a pathetic attempt at getting himself in the news,” Ms Grisham said.

She added that the comments represented the “hypocritical intolerance” towards the Trump administration.

Mr Roberts lashed out at Mrs Trump after the leader of a national organisation for young conservatives noted she has a markedly smaller staff than predecessor Michelle Obama.

Despite copping heavy flak for the tweet, he has refused to apologise or withdraw his comments.

There have been calls for him to be expelled from the social media platform.

When a user asked why the tweet hadn’t been taken down, Mr Roberts wrote, “Let the donations begin in 3 2 1…”

He later explained that Twitter hadn’t removed or moderated the tweet because “it did not violate” the platform’s rules: “It’s the whole first amdendment thing.”

Republican strategist Rina Shah told Glamour the incident underlined that political discourse in the US has “unfortunately for all of us, continued to sink to new lows”.

One Twitter user, Daniel Fischer, said while Donald Trump has “an absolute lack of class or integrity”, it doesn’t “give a pass to anyone else” to attack his wife:

Other users defended the first lady, who has an approval rating much higher than her husband’s: 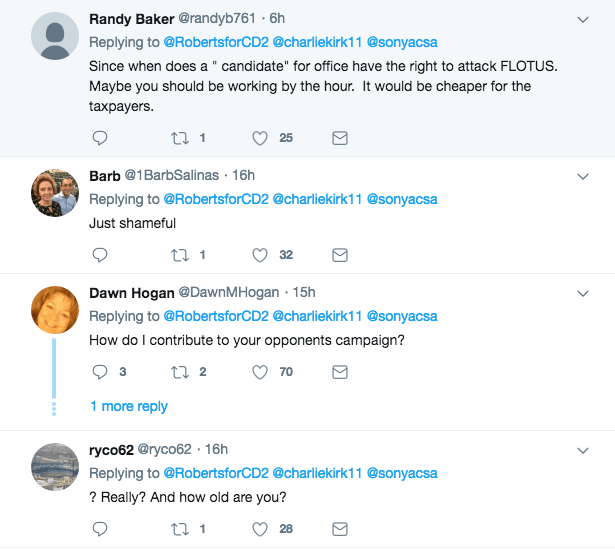 But one user asked: “Doesn’t Trump freely and openly use the name ‘Crooked Hillary’ all the time? Can someone explain why one is acceptable and the other isn’t?”

Last week, Ms Grisham was forced to fight Mrs Trump’s corner when The New York Times reported she isn’t allowed to watch what she likes on TV aboard Air Force One and is forced by her president husband Donald Trump to tune in only to Fox News.

Mrs Trump, she said, has full control over her remote control and can watch “any channel she likes”.

The clap back came after Ms Grisham was asked if Mrs Trump had seen the taped recording of her husband discussing a payment to former Playboy model Karen McDougal.

Ms McDougal claims to have had an affair with the President in 2006.

“Seems kind of silly to worry about what channel she watches on TV … or if she heard some recording on the news,” said Ms Grisham.