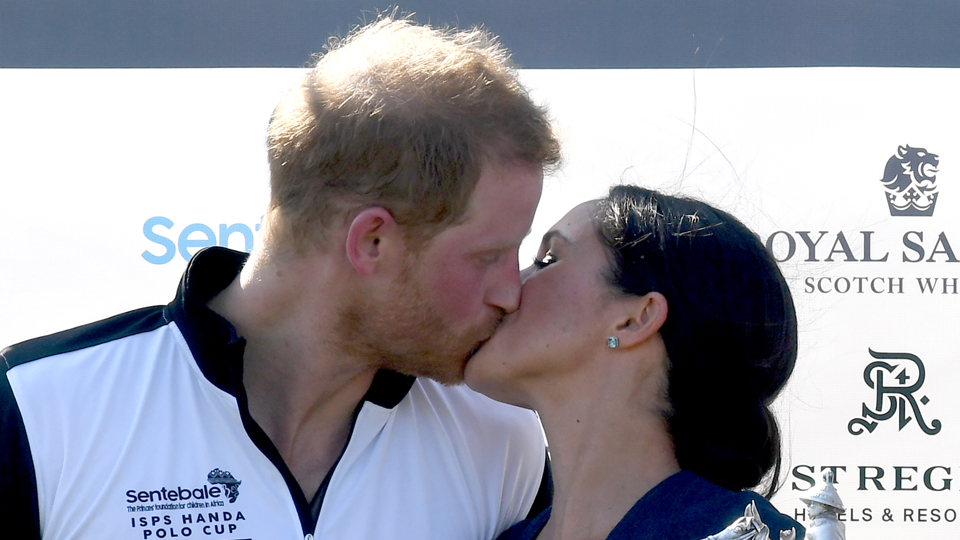 Summer love: The Duke and Duchess of Sussex celebrate at a Windsor polo match on July 26. Photo: Getty

Congratulating her husband Prince Harry after his team won a charity polo match on Thursday (British time), Meghan Markle handed over more than the trophy – she planted a passionate kiss on her man.

Figueras seemed keen to offer the trophy to Harry, but he was busy being affectionate with Meghan.

Since they first went public as a couple at the Invictus Games in Toronto last year, Harry and Meghan have made a habit of holding hands – even at royal events – but the kiss is a first, apart from their wedding day.

The charity match raised $1.7 million for Harry’s African-based charity Sentebale, which he set up in 2006.

What a day! We are absolutely delighted to have raised over £1 million for our work with children and young people affected by #HIV at the Sentebale ISPS Handa Polo Cup. #SentebaleISPSPolo pic.twitter.com/krU2bFji5V

The prince, 33, scored twice for his team, and scored again with his wife as they left the pitch at Windsor. Meghan, 36, rubbed Harry’s back as they linked hands.

The loved-up display was a throwback to the 1980s, when Harry’s parents Princess Diana and Prince Charles often had fun at polo matches.

Four days before Prince William’s birth in June 1982, the heir to the throne draped a protective arm around his pregnant wife, who that day came straight to the polo from Royal Ascot.

They would arrive together in a convertible sports car, Charles at the wheel, and would kiss when Diana presented the prince with trophies.

The pair shared pashes at Great Windsor Park, Cirencester and even Oman after polo matches.

Hitting a purple patch in late June 1985 – when Harry was nine months old – the pair kissed twice in two days at polo grounds.

Back in present day, Meghan drew admiration not just from Harry but from Figueras, who seemed a big fan of the Duchess of Sussex.

“She’s lovely, she’s wonderful. I’m very happy for her, for Harry,” the Argentinian, an ambassador for the Sentebale charity, told People of the former Suits star.

“They’re both lucky to have found each other and have this new chapter of their life.”

Asked if the couple are enjoying married life, he adds, “I think so. They seem very, very happy.”

The duchess, who in her single life was more inclined towards a neighbourhood yoga class than a society polo match, is learning more about the sport and has been several times this year.

“She said that she enjoyed the game,” Figueras said. Meghan watched with his wife, “which is wonderful because she could learn more about the game”.

The Duke and Duchess of Cambridge are also polo regulars, but are rarely affectionate in public.

At a July 2011 game in California, William leaned into his wife for a kiss, but she turned her face away at the last minute.