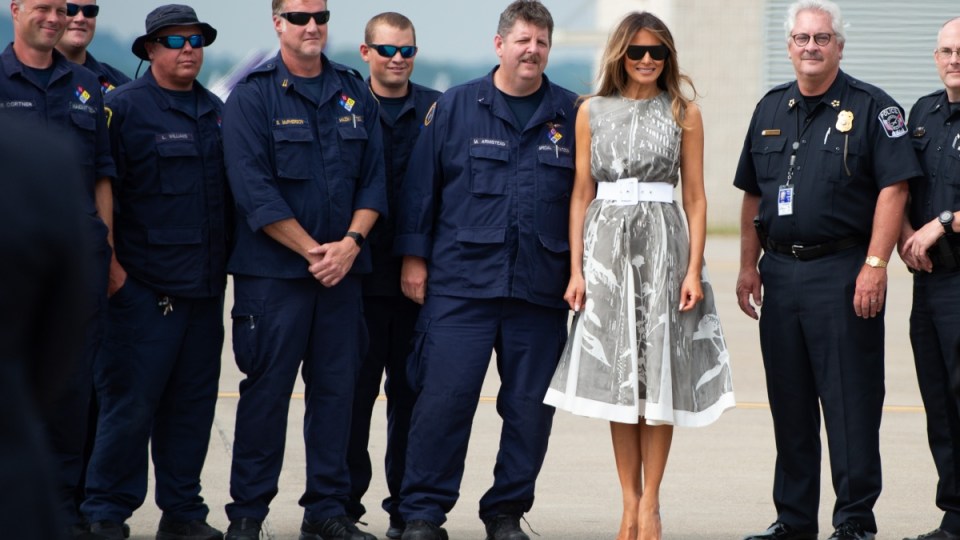 Melania Trump gets what she called a "warm welcome" from police in Nashville on July 24. Photo: Getty

Melania Trump’s spokeswoman has insisted the first lady has full use of her own remote control after reports the president was upset to find her Air Force One television tuned to CNN.

The New York Times claimed that Mr Trump insists all TVs on the presidential plane show only Fox News, and was apparently put upon when Melania was sprung watching a rival “fake news” station.

The incident, which the Times said happened during the couple’s trip to Europe this month, “caused a bit of a stir,” claimed the story.

But Mrs Trump can watch “any channel she wants”, insisted her communications director Stephanie Grisham.

The clap back came after Ms Grisham was asked if Mrs Trump had seen the taped recording of her husband discussing a payment to former Playboy model Karen McDougal.

Ms McDougal claims to have had an affair with the now-president in 2006.

“Seems kind of silly to worry about what channel she watches on TV … or if she heard some recording on the news,” said Ms Grisham.

The East Wing staffer said the focus should be on issues the first lady is keen to shine a light on, including neonatal abstinence syndrome.

On Tuesday, Mrs Trump visited a Tennessee hospital to discuss the wellbeing of children with NAS, which is a group of problems that occur in newborns exposed to addictive opiate drugs before birth.

“Did you know that every 15 minutes a baby is born with NAS?” Ms Grisham told media asking about the McDougal payment recording.

“Maybe you’d like to talk about the 160,000 kids who skip school every day for fear of being bullied, or that 280,000 students are physically attacked in schools every month.”

#BeBest will continue to bring attention to NAS. A very big thank you to @VUMCchildren & staff for an informative & moving visit. It is a joy spending time w/ such courageous kids & to witness the strength of families who must deal with these tough situations.

According to CNN, “there is no question” that Melania, 48, has given her blessing to her spokeswoman’s often fiery statements.

In June, Ms Grisham pulled no punches when the president’s lawyer Rudy Giuliani said Mrs Trump “believes her husband” about allegations he had a 2006 affair with adult star Stormy Daniels.

Ms Grisham’s biting response? “I don’t believe Mrs. Trump has ever discussed her thoughts on anything with Mr Giuliani.”

She can’t stick her nose outside. She’s much more constrained than I am. ”

Mrs Macron, who has met Mrs Trump mutliple times in Europe and America, called her “kind, charming, intelligent and very open” but said she “tries to hide” her character.

Certainly, Mrs Trump played a straight bat when she sat down silently at a roundtable discussion during her Tennessee hospital visit.

As doctors described the neonatal impacts of opioid abuse, Melania nodded and occasionally mouthed ‘thank you’, according to Time.

“Mrs. Trump is not one to seek out attention and does not do things simply for a photo op,” Ms Grisham told Time in an email.

Melania Trump is allowed to use her own remote control