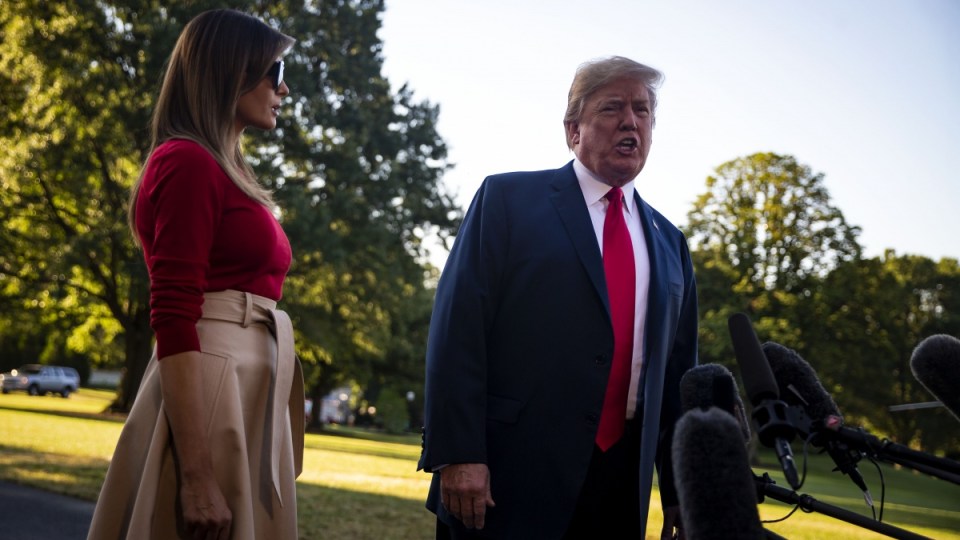 Back on the world stage for the first time since her kidney surgery in May, Melania Trump has kicked off her European tour with another literal fashion message – and a nod to Australia.

Leaving the White House for the first leg of her trip, the former model, 48, climbed the stairs to board Marine One in a cherry-red knit and khaki skirt by former Melbourne designer Martin Grant.

Now based in Paris, Grant launched his first eponymous ready-to-wear collection at 16 and snagged Naomi Campbell to walk in his first runway show in France. He is a former artistic director of a private label for Barneys New York, and has designed uniforms for Qantas.

But the talking point of Mrs Trump’s look for the start of her third trip to Europe since her husband took office was a pair of towering Christian Louboutin ‘So Kate’ pumps stamped with the word ‘Paris’.

According to luxe fashion site Matches, the $1225 shoes have “torn up pieces of the Parisian label’s signature re-lined paper shopping bags showcased under clear PVC”.

With toothpick red heels, the Louboutins “bring an iconic quality to after-hours dressing”.

For Melania, they were less cocktail, more your snazzy daywear, and signalled a return to carefully polished style after the PR disaster of last month’s $39 ‘I really don’t care, do u?’ Zara jacket worn to visit detained child immigrants.

“She just might’ve switched over to a ‘Why yes, I do care’ vibe,” The New York Post noted.

This time around, Mrs Trump is not actually going to Paris, but whatever the message, the statement Louboutins were switched for a second ‘safe for work’ look from the French shoe house during the Trumps’ flight to Belgium.

When they stepped off Air Force One in Brussels, Mrs Trump was wearing a belted Burberry trench, fixed expression and 10cm classic black leather heels.

Mr Trump is in Europe to attend the NATO summit before he and his wife head to Helsinki for talks with Russian president Vladimir Putin and to the UK for meetings with the British prime minister and the Queen.

The First Lady isn’t slated to make any formal remarks during the trip but it is “very important to her that she represents our country in a positive way abroad,” Ms Grisham said.

On Wednesday (European time) Mrs Trump’s itinerary sees her attending a spousal event in Brussels ahead of a formal dinner with NATO leaders.

The next day, the Trumps are scheduled to have dinner with Theresa May and her husband Philip May at Blenheim Palace. Mr May has bought a new suit for the occasion, Mrs May told the Sunday Times.

The glamour quotient will be upped even more on Friday, when the Trumps will meet Queen Elizabeth at Windsor Castle. Mrs Trump has done her homework, Ms Grisham said: “She learns all she can about the customs and traditions of the host country before every foreign trip.”

The President said in May 2017 his “magnificent and wonderful” wife is an asset on overseas visits.

“The countries of the world have a large number of disagreements, but they all agree with me on that one,” Mr Trump said.

“So everywhere we go, it’s the same old story. So, great job.”

Back on the world stage, Melania makes a pointed fashion statement