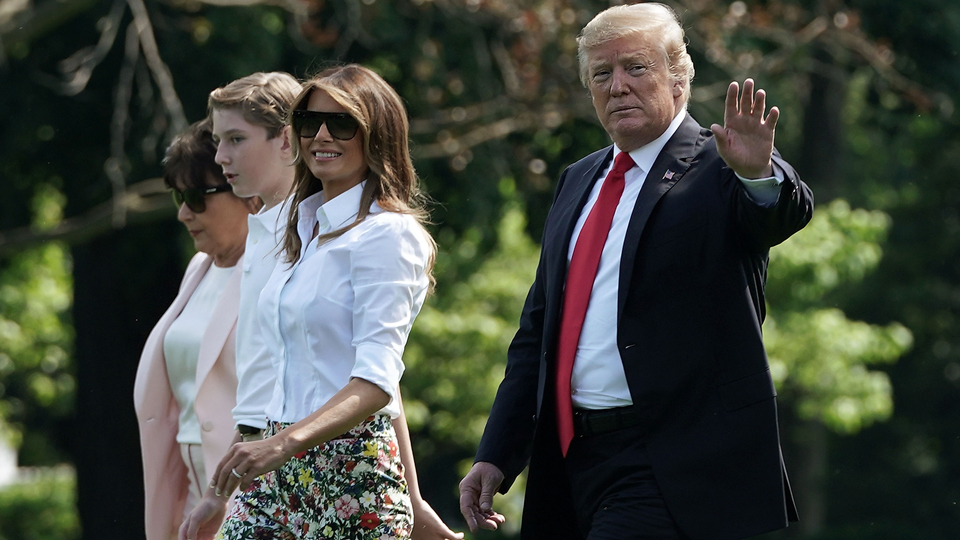 Since her husband became US president, Melania Trump has earned many thousands of dollars in royalties from a photo agency in exchange for photos to be used in “positive” coverage, an investigation has revealed.

President Donald Trump’s most recent financial disclosure reveals that in 2017 the First Lady earned between $A135,000 and $A1.35 million from Getty Images.

Under the agreement, major media organisations including Yahoo and Conde Nast have indirectly paid the Trump family, the investigation by media outlet NBC News revealed.

The deal with Getty, which sells photo subscriptions to news outlets,  required the photos be used in “positive” coverage only, something the photo agency didn’t reveal to other outlets.

Both Getty and the White House declined to provide “more precise figures” or give a full list of where the photos had appeared, according to NBC.

The pay day was for the use of any of a highly-stylised series of 187 photos of the Trumps shot by Belgian photographer Regine Mahaux in 2010, 2011 and 2016.

In one photo taken six years ago, Mr and Mrs Trump and their son Barron pose in their luxurious Trump Tower apartment high above New York.

Staring down the barrel of the camera, former model Melania is wearing – according to details provided to Getty – a one-shouldered Halston cape dress and Manolo Blahnik heels.

Barron, then aged six, is astride a life-size toy lion, with toy cars including a stretch limo at his feet.

One composite photo shows the future first lady floating inside a swan boat on a lake and swinging from a chandelier.

“I like working with the family’s image. It speaks to me. It inspires me,” Mahaux, who took Melania’s official White House portrait (which is public), told a French news outlet in 2017.

Critics noted Melania was profiting from the news industry her husband regularly attacks as “fake”. Others compared Mrs Trump’s activities unfavourably with those of former first ladies.

One posted former nude shots of Mrs Trump to Twitter, asking, “How much does FLOTUS make from these photos?”

Where are the people who screamed about Hillary Clinton potentially selling the WH and using it for personal gain?

Celebrities frequently earn royalties from photos of themselves but according to NBC, it’s “very unusual for the wife of a currently serving elected official” to do so.

Mrs Trump is not the only First Lady to earn money during their White House stints, but her predecessors have donated the entire proceeds to charity.

Vice-President Mike Pence’s wife, Karen, said profits from her children’s book would be donated to a children’s hospital and an anti-sex-trafficking charity.

Last year the president’s daughter Ivanka Trump said she would give most of the advance and any future royalties from her book Women Who Work to charity.

The deal was signed before Mrs Trump became First Lady, and the White House declined to comment on whether any proceeds have been given to charity.

NBC said it found at least a dozen outlets including Marie Claire, Vanity Fair, Russian Elle and House Beautiful that have paid to use Mahaux’s restricted images.

NBC’s Nightly News used the images in a segment on Melania that aired in July 2016 during the Republican National Convention.

An NBC News spokesperson said NBC did not agree or sign a statement that the image would be used for positive coverage, and was never informed that a portion of the royalties would go to the Trump family.

In a standard photo contract, photographers are paid royalties but models are not.

Getty Images told NBC News that the details and amounts of payments to the Trumps are covered by confidential agreements. “Everything is legal,” Mahaux told NBC.

Royalties from Getty Images do not appear in any of the financial statements submitted by Mr Trump in the three prior years.

‘Everything is legal’: Melania Trump rakes in six figures from a glossy photo deal