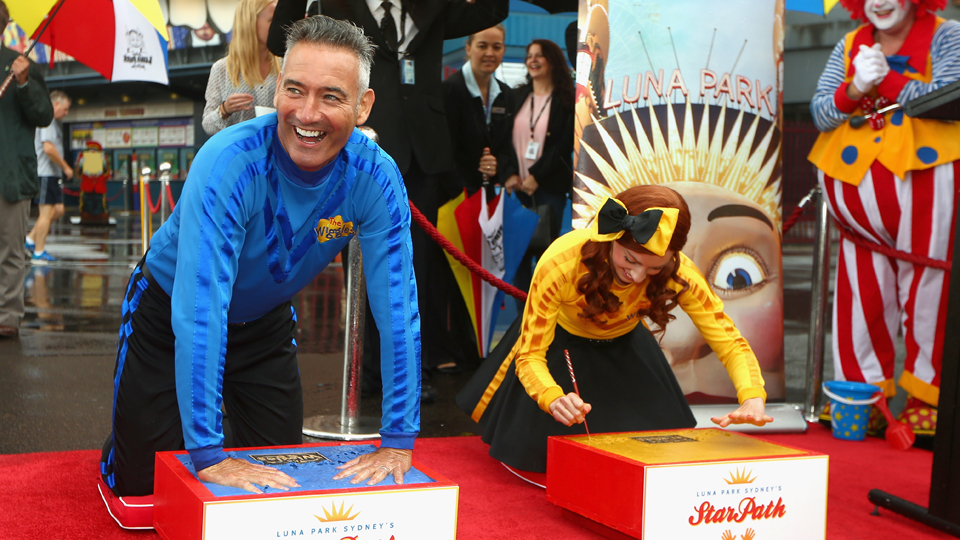 Australian entertainer Anthony Field, best known globally as the Blue Wiggle, has reassured his millions of little fans he’s fine after being taken to hospital in Boston on Tuesday (Monday US time).

Field, 55, came off second best in a collision with a revolving door. His injury was severe enough to see him stretchered to the Tuft Medical Centre.

But the father of three seemed in good spirits, sharing a photo of his bandaged nose, which needed stitches.

Big thank you to the ambos and Doc Rice at the Tuft Medical Center in Boston! 12 stitches in my nose after walking the wrong way into a revolving door! #thewiggles

Field, whose estimated personal worth is $20 million, gave a shout out to the ambulance workers “and Doc Rice” who treated him.

“Twelve stitches in my nose after walking the wrong way into a revolving door.”

Earlier on the day of Field’s mishap, the Wiggles had finished a 12-city, 17-date tour of the United States. Looking like they were having a hoot, the band shared photos of themselves performing and sightseeing at the Empire State Building.

The day before his accident, Field tweeted that he had risen at 2am to “watch the Tigers play the Raiders” on his phone in Long Island, New York.

Lots of fun rockin “Fruit Salad” yesterday thanks to the great crowd in Westbury NY!#thewiggles

The door incident is the latest health scare for Field, who launched The Wiggles in 1991 and has steered the band to its place at the top of the children’s entertainment tree.

For four years from 2005, The Wiggles topped Business Review Weekly’s list of highest-earning Australian entertainers. In 2009, they raked in $45 million.

Field is the only remaining original member of The Wiggles.

In January, he revealed he was experiencing “vision problems” after being snapped wearing an eyepatch at an Australia Day concert.

In a reportedly unrelated matter, the Sydney star told Anh Doh on the ABC’s Anh’s Brush With Fame last April that he has fought depression since he was a teenager.

“As the years rolled on I started feeling bad about myself,” he revealed on the show.

“When you’re in that zone, you feel like you shouldn’t be on earth, basically. You’re a waste of time.”

Field, who first went public about his battle with clinical depression in 2007 to shine a light on the condition, explained that it made him feel isolated, despite his fame.

“You’re in a crowd with people and you feel like you’re the only person who feels like that. They don’t understand me. No one understands me. No one gets me.”

The beloved entertainer said that no matter how bad his depression was, he still loved performing.

“It’s just when you come off stage you were back to being, ‘Jeez!’ he said.

“I’d be in the dressing rooms bloody bawling my eyes out by myself, after you’d just played to, you know, a couple of thousand people.”

In 2003, Field married wife Miki, a former dancer and trapeze artist for The Wiggles’ shows.

If you or anyone you know is experiencing difficulties, help is available. Call the Lifeline 24-hour crisis support hotline on 13 11 14.

Floored by a door: Blue Wiggle Anthony Field rushed to hospital in Boston