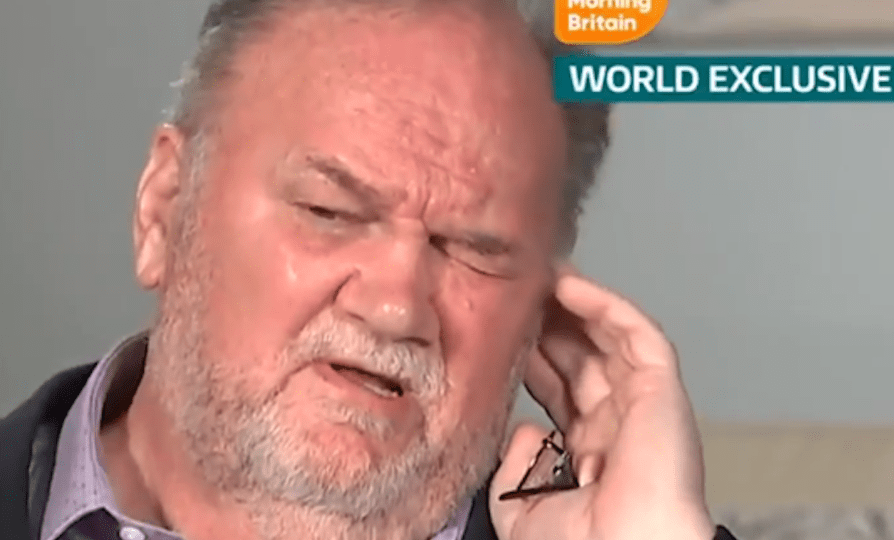 In a bombshell tell-all interview unlikely to have had the blessing of Kensington Palace, Thomas Markle has spilled insider details of his daughter Meghan’s relationship with Prince Harry, including baby plans.

He also recalled the one condition he placed on the prince when Harry rang Mr Markle in Mexico to ask permission to marry Meghan.

“Meghan told me first,” he said of the wedding plans, then “a couple” of phone calls later Harry – who he was told to call ‘H’ for security reasons – got on the line.

“I said, ‘You are a gentleman. Promise me you will never raise your hand against my daughter and of course I will grant you my permission’.”

Heart surgery the week before the May 19 wedding meant Mr Markle couldn’t travel to walk his daughter down the aisle of St George’s Chapel, Windsor.

Instead, he cried as he watched on television in a rented Los Angeles room as Prince Charles – who he has never spoken to – did the honours for “beautiful” Meghan.

“It was incredible watching her,” said “proud” Mr Markle, who said his daughter “had the sense” not to invite any family members except her mother Doria Ragland after “up to 60 Markles came out of the woodwork” asking to come to the wedding.

“I was very upset that it wasn’t me, but the whole world was watching my daughter. I was very happy about that,” he said.

“The unfortunate thing for me now is I’m a footnote in one of the greatest moments in history rather than the dad walking her down the aisle.”

WORLD EXCLUSIVE: Thomas Markle says he feels like a 'footnote in one of the greatest moments in history' after he was unable to attend his daughter's wedding to Prince Harry.

After being caught up in a paparazzi controversy the week before the wedding, Mr Markle made global headlines when he changed his mind several times about his attendance at the wedding.

He said he broke the news to Harry, Meghan and one of their security staff about definitely calling off his UK trip just before being admitted to hospital with heart problems for a second time.

“They were disappointed,” he said.

“Meghan cried, I’m sure, and they both said ‘Take care of yourself. We are really worried about you’.”

He told Good Morning Britain his new son-in-law is “great” and “an interesting guy”, even though they are yet to meet, and added Harry “made a great pick” in the former Suits actor.

Asked whether a “stork” had visited the palace yet, Mr Markle said Meghan has “wanted children for a long time. There’s got to be a child in the making there soon”.

He claimed Harry once told him to “give Donald Trump a chance”.

“I sort of disagreed with that, but I still like Harry. That was his politics,” Mr Markle said.

He also said the sixth in line to the throne appeared “open” to the idea of Brexit when they had a “loose” talk about it.

The interview drew mixed reactions on Twitter, with some users branding it “awkward” and others praising Mr Markle as a “lovely” man.

Feeling so sorry for the Duchess of Sussex this morning. Thomas Markle appears to have no concept of discretion. And I’m not sure I believe everything he is saying. @GMB

This interview is inappropriate, cringeworthy and just embarrassing, #itv #gmb you should be ashamed!!! #thomasmarkle

Wow @GMB Thomas Markle interview !!! What a lovely warm human being! No wonder Meghan is so beautiful!