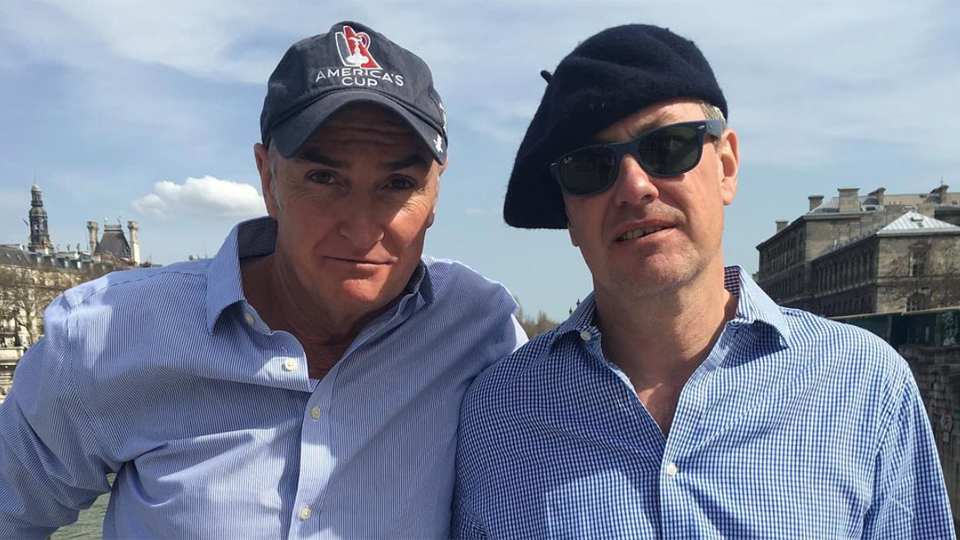 The couple are living the high life, based on their social media. Photo: Instagram

Fresh from welcoming a divorced American actor to its ranks, the royal family is soon to celebrate its first gay wedding.

Later this northern summer the Queen’s third cousin Lord Ivar Mountbatten will wed his “gorgeous beast” partner James Coyle in a “very small” ceremony at a country chapel on his Devon estate.

The couple announced their engagement on June 16 via an Instagram post, with Mr Coyle hefting a supercharged magnum of champagne: “As usual James has gone overboard with his purchases. You’re not a lord yet, Jimmy!”

Lord Ivar also announced on social media that, in a modern twist, his ex-wife Penny Thompson will give him away.

Ms Thompson said she is helping Mr Coyle, an airline cabin services director, organise the wedding and that they “have got on from the first 10 seconds of meeting each other”.

The pair will be inviting “about 120 friends” to the “party” after the service, said Mr Coyle, who told the Daily Mail: “There won’t be two men in tuxedos on a cake, white doves or anything twee.

“We’re not cutting cakes. We’re not having a first dance.”

Lord Ivar – the great-great-great grandson of Queen Victoria – agreed: “We’ll probably have cheese instead of cake.”

Explaining some of his romantic history to the Daily Mail, Lord Ivar said he still loved his ex-wife and that their wedding day in April 1994 was one of the happiest of his life.

The couple’s relationship blossomed in the 1990s when Ms Thompson helped Lord Ivar start an event management business. She knew when they wed he was attracted to men.

“I married Ivar with a completely open heart and an open mind about sexuality. I didn’t have any fears about it because I loved him, and love conquers all, doesn’t it?” she said.

While their marriage saw happy family holidays in Bermuda and long weekends with Joan Collins in the south of France, privately Lord Ivar was exploring his sexuality.

“Penny accepted me for who I was, so perhaps I relaxed and felt I could explore that part of me as our marriage matured,” he told the Daily Mail.

“I adored Penny … but I always describe it as trying to get a square peg into a round hole.”

In 2010, after 15 years of marriage, Ms Thompson left her husband, giving back the Mountbatten jewels and possessions: “I knew Ivar couldn’t be his authentic self unless I left.”

The peer, 55, came out two years ago. He reportedly met Mr Coyle at the exclusive Swiss ski resort of Verbier in March 2015.

“All my good friends have accepted James,” he said. “I basically told everyone, ‘I’ve found somebody — it’s a bloke.’ They just started laughing.

“Then they met James and one particular mate said, ‘If I was gay, I’d certainly go for him.’”

Future and former spouses. My daughters decided it was only right the Mum should walk me down the isle and give me away to James. Here’s hoping he won’t say no at the last minute. 😳 #verycoolex #readallaboutit #cantmakemymindup

When Lord Ivar told eldest daughter Ella about the wedding, “She said, ‘Oh Pap, it’s not a big deal’. That generation, they’re completely cool about the concept of this.”

A geologist and farmer, he said he felt he didn’t need to get married again because “I’ve been there, done that, and have my wonderful children”.

But he “really wanted to do it for James.” Mr Coyle said “there was no proposal, just an acceptance of this great love”.

Lord Ivar said while his close friend Prince Edward, godfather to his two eldest daughters, has a diary clash and won’t be at the wedding, he and his wife Sophie “adore James”.