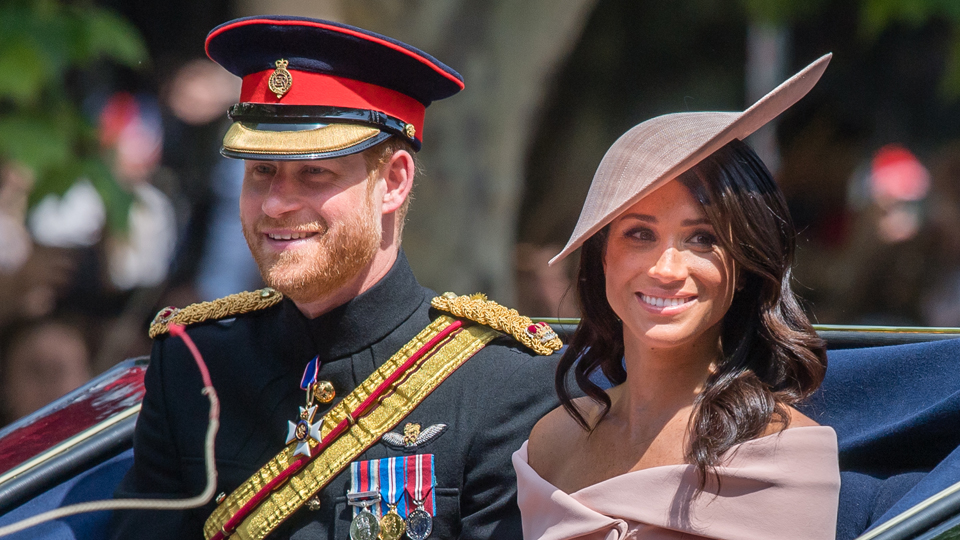 The Duke and Duchess of Sussex at May 9's Trooping the Colour after their secret honeymoon. Photo: Getty

Prince Harry and his new bride Meghan Markle will visit Australia in October during their first official overseas tour, Kensington Palace has confirmed.

The Duke and Duchess of Sussex, who married last month, will travel to Sydney for the 2018 Invictus Games – a Paralympics style event for defence veterans – of which Prince Harry is patron.

“Their Royal Highnesses have been invited to visit the Realms of Australia and New Zealand by the countries’ respective governments”, said the official announcement.

The Duke and Duchess of Sussex will undertake an official visit to Australia, Fiji, the Kingdom of Tonga, and New Zealand in the Autumn 🇦🇺🇫🇯🇹🇴🇳🇿

The tour will fall on the occasion of @InvictusSydney 2018. pic.twitter.com/BWlU14WM66

It hasn’t been revealed if they will travel elsewhere in Australia, but there has been buzz the pair has a standing invitation to spend time at a Noosa home owned by Meghan’s former Suits co-star Gabriel Macht.

The duke and duchess will follow in the footsteps of Prince Harry’s parents, Charles and Diana, whose first overseas tour after their marriage also took in Australia and New Zealand.

The royal couple will each receive a specially-crafted Akubra hat but it’s unclear if they’ll also make time to meet the two koalas joeys named after them at Sydney’s Taronga Zoo.

Kensington Palace said more details about the tour will be released “in due course”.

Meghan’s first tour is part of her induction into the royal family. She made her Buckingham Palace balcony debut after Saturday’s Trooping the Colour to help the Queen celebrate turning 92.

On Thursday, the former actress will hone her new royal skills with her first solo public outing with the monarch.

While earlier reports said the pair would be making a “roadtrip”, Country Living UK said the duchess and the Queen will travel 265 kilometres aboard the royal train to Chester, where they will open a bridge and have lunch.

“It’s all about the monarchy. She can’t expect Meghan to know everything without being shown.

“She doesn’t want 70 years of hard work to be for nothing,” added Seward.

“I’m sure she feels Meghan needs a steadying hand in these early days.”

Meanwhile, while Meghan is in work mode, Kate Middleton, 36, is spending her summer maternity leave having fun.

One Sunday, the duchess took Prince George, 4, and Princess Charlotte, 3, to cheer on husband and father Prince William, 35, at the Maserati Royal Charity Polo Trophy at the Beaufort Polo Club.

On the sidelines, Charlotte did handstands, danced in a pair of sunglasses and ran around the pitch with her big brother.

Kate – in a $68 Zara sundress and summer wedges – sat on the ground to watch her husband play, plonked Charlotte on her lap and broke into a run down a small hill.

During the afternoon, George created social media controversy by wielding a realistic toy gun that he appeared to point at other children.

This was the only disappointing thing about today’s polo match photos. I really don’t get toy guns – why play with things you should never have to use😥
Kate alone shouldn’t be blamed about this as we don’t know who owns the toys, but someone should have said that this is NOT OK. https://t.co/TC8qKN1ndd