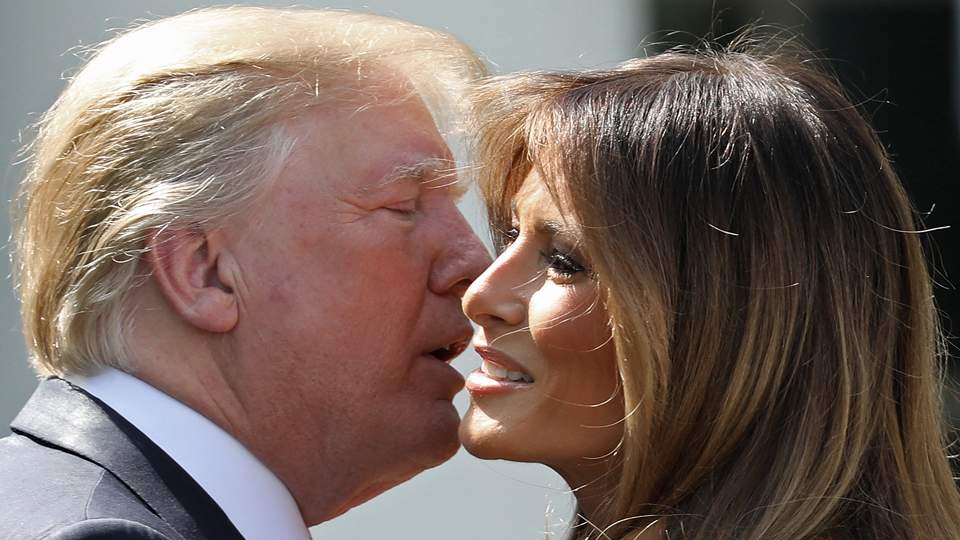 President Donald Trump kisses his wife Melania Trump at the May 7 launch of her Be Best initiative. Photo: Getty

Reports that first lady Melania Trump will join her husband at a closed-door, White House function later Tuesday (AEST) have done little to quell theories attempting to explain her 25-day absence from the public.

The White House schedule lists the Gold Star Families Memorial Day Reception as a closed-press event and says the first lady will be in attendance alongside President Donald Trump.

Shortly before it was reported she will attend the Gold Star function for families of soldiers killed in action, it was announced that Mrs Trump won’t be joining her husband for two high-profile overseas trips.

Despite it being a short flight away on Air Force One, she “will not attend” the G7 summit in Canada on Friday and Saturday, according to her communications director Stephanie Grisham.

Mrs Trump, 48, has also pulled the pin on accompanying the President for arguably his most important trip yet, his historic summit with North Korean leader Kim Jong-un in Singapore on June 12.

“There are no plans for her to travel to Singapore at this time,” Ms Grisham said of the first lady.

She stayed behind at the White House last Friday when Mr Trump and his children Don Jr, Ivanka and Tiffany and son-in-law Jared Kushner headed to the Camp David retreat for the weekend.

Also apparently absent from the family getaway was Barron Trump, 12, her only child with Mr Trump.

According to celebrity website HollywoodLife, Mrs Trump’s friends outside the White House are “genuinely” starting to worry about her.

“Nobody has heard from Melania over these past few weeks, and her cell phone has been switched off,” said a source.

“To have radio silence for this long is just strange. Something is going on, but nobody knows what. It’s definitely concerning.”

Where is @FLOTUS? And why was she in the hospital so long? Is she sick? Did she have a breakdown? Did @POTUS force her to get plastic surgery? Was the whole thing a scam? This is not a joke. These are legit Q’s abt America’s First Lady that remain unanswered. #Melania #Trump

WHERE ARE WHITE HOUSE LEAKERS WHEN WE NEED THEM?????!!! Where is #Melania???? Has she divorced him? Did she have major plastic surgery? Is she with her boyfriend on a vacation?? Has anyone seen Baron?

I can't believe they recast #Melania in the middle of the season. pic.twitter.com/i4nEgpj5vO

Am I the only one who thinks this weekend at Camp David is a family meeting to discuss the announcement that #Melanie, aka #Melania, has quit the shitshow?

Mrs Trump hasn’t been seen in public since May 10, when she and the President welcomed home three Americans released by North Korea.

Four days later, she was admitted to the Walter Reed Army Medical Centre for what the White House described as an “embolisation procedure” for a benign kidney issue.

Mrs Trump was reportedly expected to stay in the hospital for one night but ended up staying for five.

The President has been vague about his wife’s location and health, waving at an empty window last week at the White House when reporters asked about Mrs Trump.

In response to growing concerned buzz, a post to Mrs Trump’s Twitter account – its tone very similar to the signature social media style of the President – said she was “feeling great”.

I call upon any statement analysis experts who could (should) compare this tweet with previous Melania's previous tweets (although, of course, this would assume previous tweets were also written by Melania). Please retweet and share. #Melania #melaniamissing pic.twitter.com/ylUfzm9CW4

Earlier that day, Ms Grisham said the first lady had been working on projects including a picnic and having meetings with staff.

Conspiracy theories behind the Melania mystery have included that she is recovering from plastic surgery in private, that she’s fled to New York with Barron and that she’s holed up with special counsel Robert Mueller, co-operating with his Russia probe.

Another is that she’s in a secret location with Barack and Michelle Obama, dishing dirt for a tell-all project on her husband.

Friend who just retired from Secret Service has confirmed that Melania Trump has moved back to New York for the "foreseeable future" and will now cost us millions in additional protection daily.

He said that the agents assigned to her detail have been told to prepare.

But a CNBC reporter tweeted this week: ‘Not that this will deter the conspiracy theorists, but I saw the First Lady walking with her aides in the West Wing yesterday afternoon.’