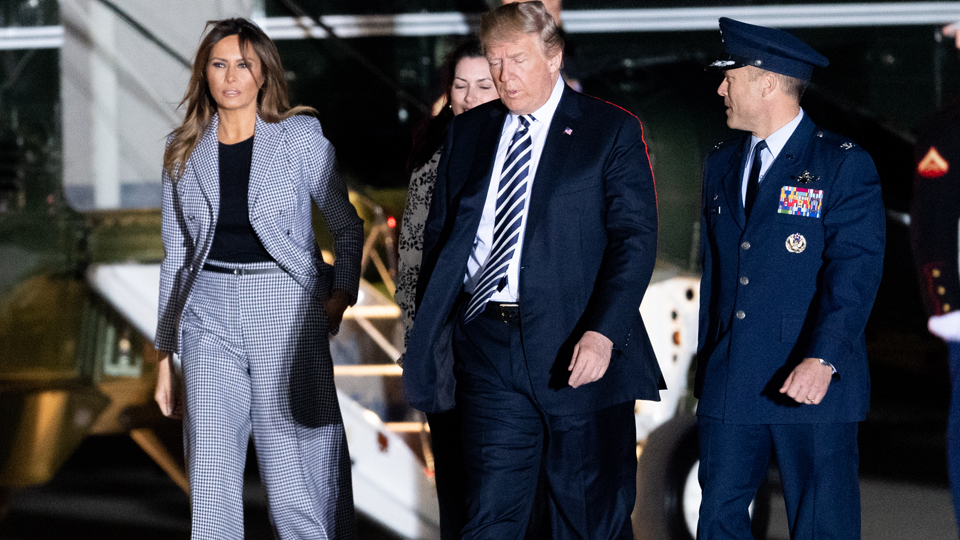 Melania Trump, at her last public outing on May 10, tweeted she is "feeling great". Photo: Getty

Melania Trump is back – but hardly anyone saw her.

The US First Lady, whose 26-day absence from public life sparked conspiracy theories about her whereabouts and concern for her health, reappeared with her husband President Donald Trump at an official White House reception on Tuesday (Monday afternoon US time).

“Melania had a little problem a couple weeks ago but she wouldn’t miss this for anything,” Mr Trump said, according to a tweet from reporter Jena Greene, who was in the crowd.

Media was barred from the private event but Ms Greene, who works for conservative news site Daily Caller, tweeted a video apparently showing Mrs Trump entering the packed East Room with her husband.

The footage showed Mr Trump, 71, escorting his wife, 48, to the front row then taking to the podium to address the crowd, which included more than 40 Gold Star families of American military personnel killed in action.

“Good to see her doing so well,” said Ms Greene, whose father was killed in Iraq in 2004.

First public appearance by @FLOTUS in just under a month at the Gold Star Families reception to ihht. Good to see her doing well. pic.twitter.com/p6pCB4UPbi

A person inside the room told CNN the President made a joke that fell flat about the First Lady’s extended absence from society.

Saying the media was asking, “Where’s Melania?”, Mr Trump riffed for about a minute or so about the speculation, which has included theories the First Lady had decamped with son Barron, 12, to New York or was recovering from plastic surgery.

The President laughed off rumours his wife had left him (“Isn’t that right, honey?”) before asking “Did she leave him?” and pointing to Mrs Trump in her VIP seat.

The attempt at humour was awkward, said CNN, “considering the event was to honour Gold Star families who have lost loved ones at war”.

Ms Greene said the crowd went along with the playful POTUS, who also reportedly talked about the strong economy:

@realDonaldTrump joked about the media’s speculation regarding Melania’s recent absence. He laughed off rumors of them breaking up, saying it wasn’t happening. “Isn’t that right honey?” He says to a room full of laughing Gold Star families

Mrs Trump followed up the outing by shared photos of the “celebration” with her 10.5 million Twitter followers. In one snap, Mrs Trump was visible next to her husband, but the social media site still lit up with what became a new theory.

Tonight @POTUS & I were honored to pay tribute to our fallen heroes. Thank you to the Gold Star families that joined us in celebration & remembrance. pic.twitter.com/6oSh1t88G7

As to what Melania’s “little problem” might be – she had what was described as a successful and uncomplicated medical procedure on May 14 – no further explanation was forthcoming from the White House.

Mrs Trump’s communications director Stephanie Grisham did say the lack of media photos or videos of Mrs Trump from the Gold Star event was a decision made out of respect for the military families.

Before the reception, amid ongoing memes and questions about her boss, Ms Grisham said the “nonsense” was fuelled by the media.

“Mrs Trump has always been a strong and independent woman who puts her family, and certainly her health above all else, and that won’t change over a rabid press corps,” Ms Grisham said.

“She’s confident in what she is doing and in her role, and knows the rest is just speculation and nonsense.”

It was announced on June 3 that Mrs Trump had pulled out of two important overseas trips with her husband, this weekend’s G7 summit in Canada and the June 12 meeting in Singapore with North Korean leader Kim Jong-un.

Probing why Mrs Trump would be a no-show for the marquee meetings, NBC claimed it could be as simple as wanting to avoid post-surgery blood clotting on flights.

“But for the left, there’s a lot of appeal to the idea that the First Lady has essentially been held hostage by her husband’s presidency — unable to get away from him or the public spotlight — while he embarrasses her,” the media outlet reported.

“The disappearance of a first lady means the White House is playing without a full roster for now.”

Body found in Victorian creek, amid further flood warnings
‘Horrific’: Mother to be charged over motorway stabbing
Australia’s Cambage takes break from WNBA
Iran denies attack on Salman Rushdie
Giuliani targeted in election criminal probe
No Kyrgios in Australia’s Davis Cup charge
Would you leave your kids in a different class on a plane?
Today's Stories