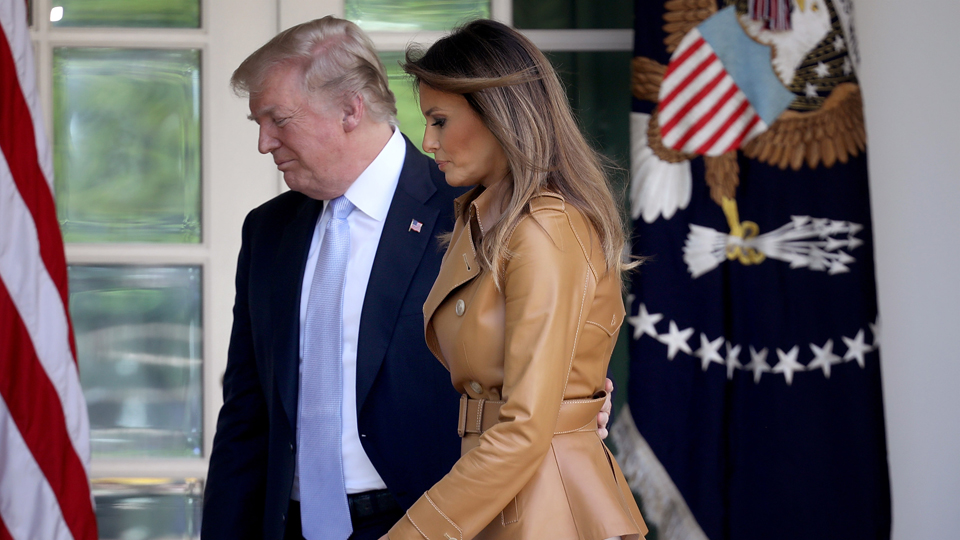 One of Melania Trump's last public outings was with husband Donald Trump at the White House on May 7. Photo: Getty

Amid conspiracy theories about her whereabouts, Melania Trump has taken to Twitter to assure the world she is safe and well.

Mrs Trump was last seen in public 22 days ago. She had a routine hospital procedure four days later.

The Washington Post noted it is an “unusually long absence” for even the most private of first ladies.

But Mrs Trump broke her silence on Thursday (Wednesday US time) to assure doubters and concerned souls that “I’m here at the White House [with] my family”.

At the same time, Melania, 48, took a swipe at the media:

I see the media is working overtime speculating where I am & what I'm doing. Rest assured, I'm here at the @WhiteHouse w my family, feeling great, & working hard on behalf of children & the American people!

It was reported Mrs Trump was presumably sending her message from the first family’s second-floor private quarters at the White House, but her reassurances sparked more anxiety among her followers.

Some pointed out similarities in the First Lady’s message and the social media style of her husband. Old tweets sent by the President using the words “working overtime” were retweeted, and the signature exclamation mark favoured by Mr Trump was noted.

The story laid out speculation that the First Lady was holed up in New York, tied up co-operating with special prosecutor Robert Mueller or laid up recovering from cosmetic surgery.

It was also suggested Mrs Trump was bunkered down with Barack and Michelle Obama, helping them write a juicy book about her husband.

The truth is less exciting, according to the First Lady’s spokeswoman Stephanie Grisham, who has consistently denied the rumours.

She said Mrs Trump was busy planning a picnic.

Melania is “doing really well”, Ms Grisham told People magazine, adding the First Lady has “been involved in several internal meetings with staff all last week, and that continues this week”.

With her staff, Mrs Trump has “been going over initiatives and other long-term planning for events such as the Congressional Picnic and 4th of July”.

But Ms Grisham would not say exactly when the First Lady would reappear.

Melania was last seen on May 10, when she and her husband welcomed home three Americans freed from North Korea.

She broke cover the day before that – via Twitter – to say her “heart goes out” to victims of the Santa Fe school massacre, and also sent a Memorial Day tweet on May 28.

In the absence of Melania, Mr Trump, 71, roped in daughter Ivanka, 36, to help out with a White House sports and fitness day event on Wednesday.

Mr Trump was vague when asked by reporters at the White House last Friday about his wife’s health and whereabouts.

“She’s doing great. Right there,” the President said, reportedly pointing at a window towards the second floor.

“She’s doing great. She’s looking at us, right there”.

The Post said: “Reporters turned to look at the spot he indicated, but there was no sign of the First Lady.”