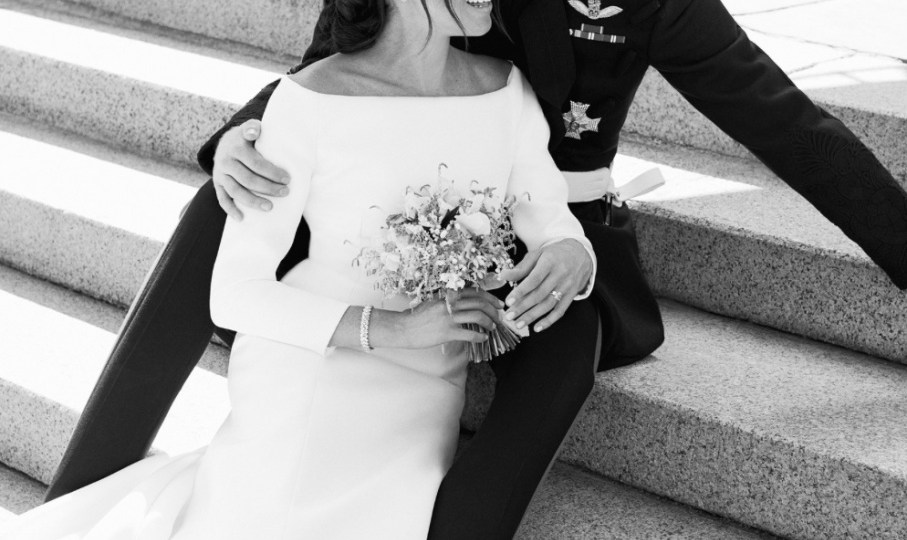 Prince Harry and Meghan Markle sit on the steps on the East Terrace of Windsor Castle. Photo: Twitter/Kensington Palace

Lubomirski said the intimate black and white photograph of the Duke and Duchess of Sussex at Windsor Castle after Saturday’s royal wedding came after an “exhausted” Meghan slumped between Harry’s legs on the Rose Garden steps.

The fashion photographer told reporters on Wednesday he quickly asked the bride and groom to perch on the steps for some candid shots.

“After the set up shots we went to the reception and I said if the couple had any energy after that, we were going to go into the Rose Garden and take some intimate quick shots,” he said.

“We went out there and had about three and a half minutes to take some quick shots because everything was running like clockwork.

“The sun is setting right just over the top of Windsor Castle just behind them, it was just the most serene, beautiful light, they’re in love, walking around this beautiful garden.

“I said just before you go in, let’s sit down on these stairs, and she just slumped in between his legs.

“They were just laughing because they were joking about how they were exhausted and finally it was over.

“They just looked at each other and they were just laughing, and it was just this beautiful moment.

“It was just one of those magical moments, when you’re a photographer and everything falls into place.”

“I didn’t want it to feel like a sports team photo or an army photo, regimented and linear,” he said.

“So we talked about how we could break it and get some rhythm and asymmetry into it and it all came down to very little tiny things – nothing crazy.

The Duke and Duchess of Sussex with the Bridesmaids and Page Boys, taken by photographer Alexi Lubomirski in the Green Drawing Room of Windsor Castle. #RoyalWedding pic.twitter.com/nFaPQSIzVl

“In terms of how we were placing people — we wanted some people sitting, some people standing, kids on parents laps and that was a huge thing to get that realness out of it.”

Lubomirski said on social media in was “an incredible honor and privilege to document the Duke and Duchess of Sussex’s inspiring journey of love, hope and family; from the engagement photos, all the way through to the official wedding and family portraits on Saturday.

“This has been a beautiful chapter in my career and life, that I will happily never forget. Thank you to everyone at @kensingtonroyal and @theroyalfamily,” he posted on Instagram.