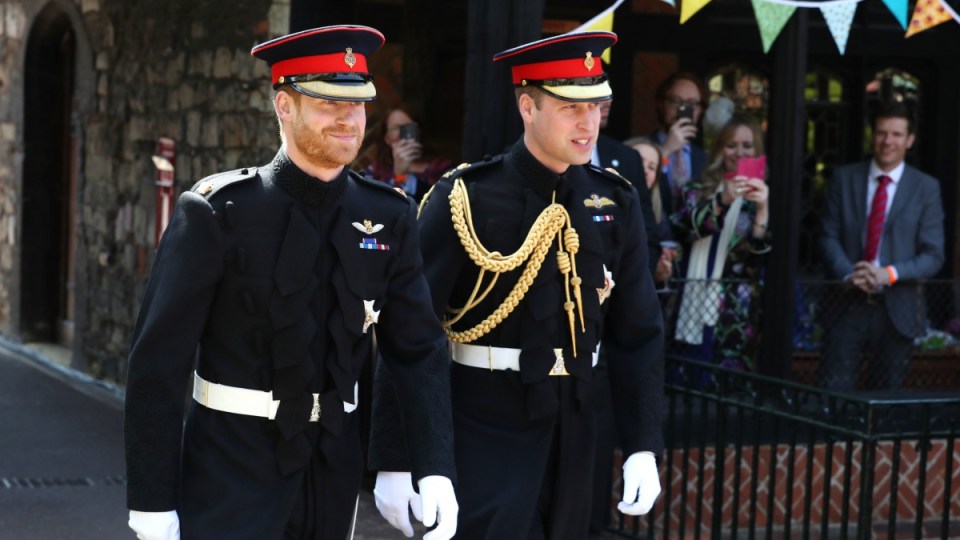 Princes Harry and William were in synch en route to St George's Chapel for the royal wedding on May 19. Photo: Getty

The day after their wedding – estimated to have cost a fraction under $57 million – Prince Harry and Meghan Markle are back home at their two-bedroom cottage at Kensington Palace to start married life.

And even as they’re unpacking their bags from their Windsor Castle sojourn, more details of their exclusive second reception’s “chilled festival vibe” are leaking out.

Among them: Prince William’s “naughty” and “moving” best man speech.

William had a lot of material to mine – Harry’s 2012 nude romp in Las Vegas perhaps top of the list – and a source said his words were “allegedly payback” for Harry’s own ribald speech at his brother’s 2011 wedding to Kate Middleton, according to the Express.

Still, he “managed to strike the right balance between hilarious and solemn”, the source said.

The solemn part included paying tribute to his and Harry’s late mother Princess Diana, whose striking aquamarine cocktail ring was on Meghan’s right hand at the party.

He said “she would have been proud of her younger son”, said the source.

William, 35, was also genuine in his praise for the new Duchess of Sussex, reportedly calling her was “the best thing that had ever happened to Haz”.

He also welcomed her to the family “as the sister he never had”.

The comments were made in a joint speech made by William with Prince Harry’s best friend, Charlie van Straubenzee.

“They teased Harry about his growing bald patch, and Wills said it would become as bad as his”, one guest told the Mirror.

William wasn’t the only one to impress the guests at the late-night soiree.

Harry, 33, also took to the microphone and gave what was reportedly a “rip-roaring speech” in which he “gushed” about his new wife and said he was excited about “spending the rest of his life” with Meghan, 36.

According to reports, Harry told friends: “You are the people that make ‘me’ me in my Harry life, which as you know is the backbone to Prince Harry.

“Now I’m going to hand over to my far better half.”

That brought Meghan to centre stage, said the Mirror, which claimed she thanked the royal family for making her part of their “firm” and ended her “emotional” short speech by declaring, “I have found my prince.”

Instead of a slow dance first number, the newlyweds went upbeat, opting for Whitney Houston’s I Wanna Dance With Somebody.

They are said to have invited all of their 200 guests to join them for the song.

George Clooney, enjoying the evening with his wife Amal, was a busy man, dancing with Meghan and Kate Middleton, according to The Daily Mail.

Meghan’s unofficial matron of honour, stylist Jessica Mulroney – mother of three of the small bridal attendants – posted a sneak peek of how glamorous the night was.

Magical weekend with a handsome fella

Among the post-dinner entertainment was an ode to Meghan’s American heritage when the classic drinking game beer pong was played – and a clear champion emerged.

“Serena Williams played beer pong like it was tennis,” The Sun reported.

“Everyone had so much fun with it.”

One surprise guest? Meghan’s rescue beagle, Guy, who reportedly hitched a ride to Windsor with the Queen.

According to UK media, Guy – who Meghan adopted from a Canadian shelter in 2015 – was front and centre at the reception, “causing chaos and scoffing all the spilled canapés”.

At the end of the night, William reportedly pranked his brother by attaching a ladder to his vintage Jaguar convertible.

“Apparently Harry fell off a ladder recently while changing a light bulb for Meghan and hurt his arm”, a source told Mirror Online.

“So Wills tied a ladder to the back of the car, which nearly floored a few people.”