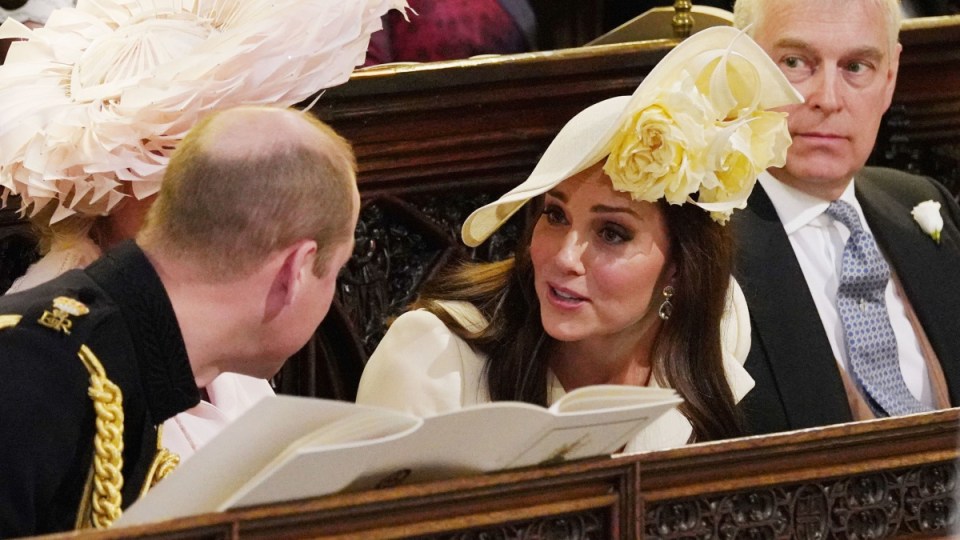 Kate Middleton was tickled by one particular moment during the ceremony. Photo: Getty

In a royal wedding like no other – seriously – there were a handful of standout moments that tugged at heartstrings, were unintentionally hilarious or just plain adorable.

While it was Harry and Meghan’s day, their thunder was nearly stolen by an unknown bishop with a whole lot of energy.

Here are the seven top moments from a quality field …

When the royals melted down

US bishop Michael Curry was the absolute scene-stealer. Preaching to every one of Britain’s senior royals, including the Queen plus 600 A-list guests, he showed zero nerves and enormous charisma.

While his time management skills were later questioned, Bishop Curry milked every second of his turn on the world’s biggest stage, and his passionate message about the power of love drew visible reactions from the congregation.

Most notably, the usually unflappable royal family – including the bride and groom – struggled to hold back laughter.

Harry sauntered up on foot to St George’s Chapel, chatting to his brother Prince William. The brothers were in full Blues and Royals military uniform, tailored at Dege & Skinner on Savile Row.

The groom, waving to the crowd, looked less nervous than his best man. But after greeting officials, he slipped into his seat at the front of the chapel and looked skyward, taking deep breaths.

William tried to distract him with small talk but Harry shut him down and concentrated on the moment.

The little bridesmaids and pageboys

Last time he was a pageboy, at his aunt Pippa Middleton’s wedding in May 2017, Prince George, 4, stomped on the bride’s train and was sharply reprimanded by his mother, the Duchess of Cambridge. This time around, he knew better and was a sea of smiles, holding hands with another pageboy as they walked into the church.

His sister, Princess Charlotte, 3, linked hands with other tiny bridesmaids, all of whom scored a special gift from the bride, apart from their Givenchy dresses: white leather Aquazurra shoes monogrammed with their initials and the wedding date.

After the service, Charlotte, holding her mother’s hand, waved confidently to the crowds while George looked decidedly less enthusiastic.

Not seen in public since her youngest son’s April 23 birth, the Duchess of Cambridge was kept busy. The new mother stepped out of a state car and immediately took charge of the 10-strong horde of small attendants. With little Louis tucked away in the care of nanny Mario Borrallo, Kate looked as energetic and poised as ever, in a primrose wool silk coat by Alexander McQueen, a Philip Treacy hat and nude Jimmy Choo heels. If this was a woman at all exhausted from having three small children including a one-month old, she can give her new sister-in-law a run for her money in the acting stakes.

The prince’s face spoke volumes when he saw his bride walking in to St George’s towards him. He didn’t smile hugely, but his emotions washed over his face – his entire life, he’s been media trained in every way and on this special occasion which was both public and intensely private, he looked shy and shellshocked in the best way possible. Not for Harry the stoic reserve of royal grooms before him – he looked like every other man who is deeply in love and can’t believe his luck.

No sooner had cellist Sheku Kanneh-Mason, 19, put string to bow than Twitter erupted with fans lovingly calling him ‘Cello Bae’ thanks, “in part to his looks, in part to his obvious talent, and in part to his cello face —the slightly more reserved cousin to bass face”, said Vanity Fair.

The winner of 2016’s BBC Young Musician competition, Mr Kanneh-Mason was scouted by Harry after he heard him play at an event. Next minute, the teenager was playing his heart and face out on an international stage.

During the Signing of the Register @ShekuKM and the Orchestra perform #RoyalWedding pic.twitter.com/AVpGngrfBv

The first kiss. And the second

With no Buckingham Palace balcony on which to exchange a public kiss, Harry and Meghan wasted no time giving the public what they wanted. The newlyweds were barely out of St George’s Chapel before they locked lips, with the royal family streaming out of the chapel behind them to lend their own version of G-rated voyeurism.

While it was a terrific and well-executed moment, Harry and Meghan decided to give it another crack during their carriage ride through the streets of Windsor.

And so the new Duke and Duchess of Sussex began married life in ripping, unusual, individual style.